Monticello’s iconic west front has been undergoing a major change in the past few months. The columns on the West Portico (aka Southwest Portico) are being restored to their original Jefferson-era appearance. 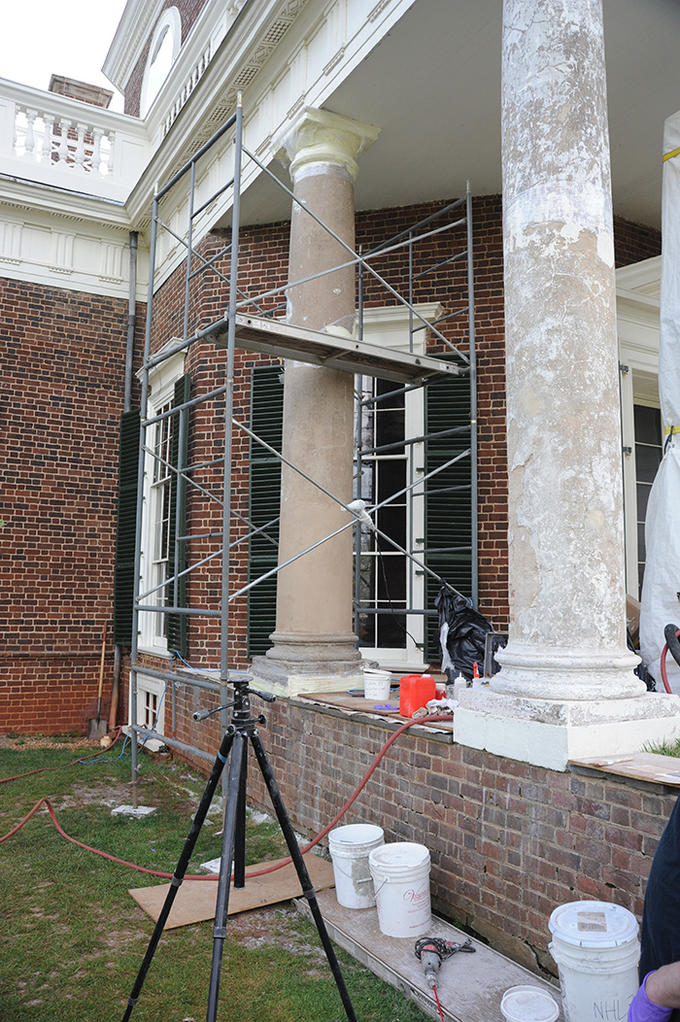 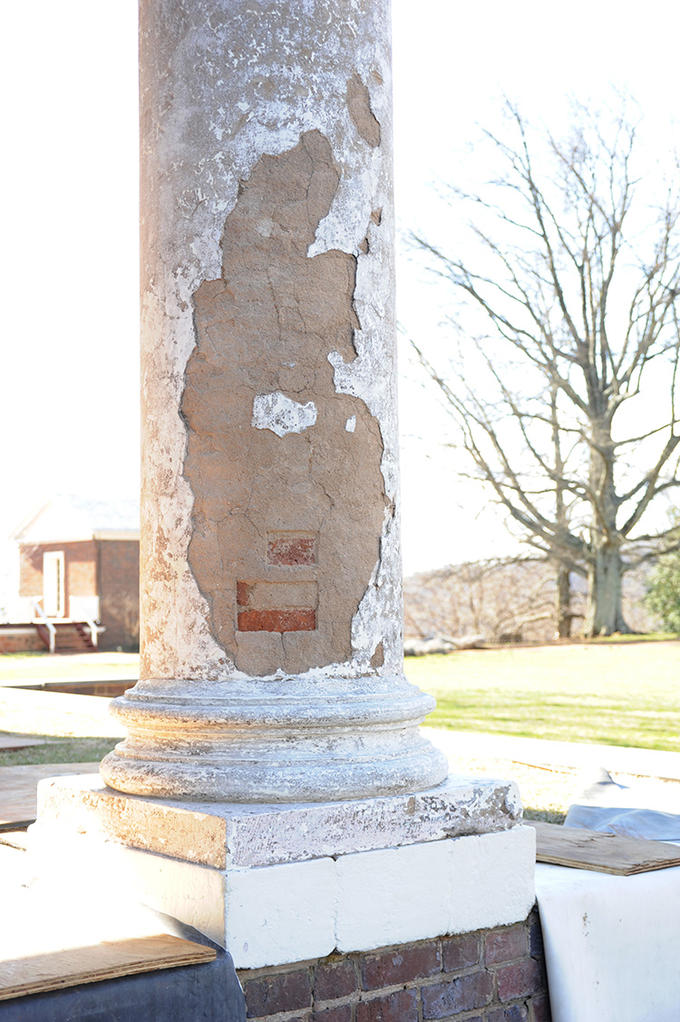 Unlike the columns on the East Portico (aka Northeast Portico), the columns on the “nickel view” were made of specially molded “compass” bricks instead of stone. They were then “rendered” or covered in a smooth stucco-like coating to mimic the appearance of stone; a common 18th- and 19th-century practice. The East Portico column bases, capitals, and shafts are all carved from local quartzite.

Around 1807 the East Portico columns were sand-painted along with the rusticated woodwork. Sand-painting is a type of faux finish, usually applied to a wood substrate, which mimics the look of stone. We believe it was applied to the stone columns to disguise damage that occurred a few years earlier during the laborious process of taking them down and re-erecting them in their new location as part of the remodeling.

Sometime after Jefferson’s death these columns were painted white. Over the years numerous additional coats of paint were applied. They were finally restored to their original appearance in 1981 by removing all of the paint and re-creating the sand-painted finish.

In contrast, the West Portico columns were not constructed until 1823 and replaced temporary ones fashioned from tulip poplar tree trunks. Like those at the East Portico they also have stone bases and capitals but the shafts are made of specially molded wedge-shaped brick (sometimes called “compass” brick.) This was a common way to construct columns in the 18th and 19th century as it was easier than building with solid stone. The final step was to give the shafts a smooth stucco-like coating called “rendering” using a lime-based mortar. 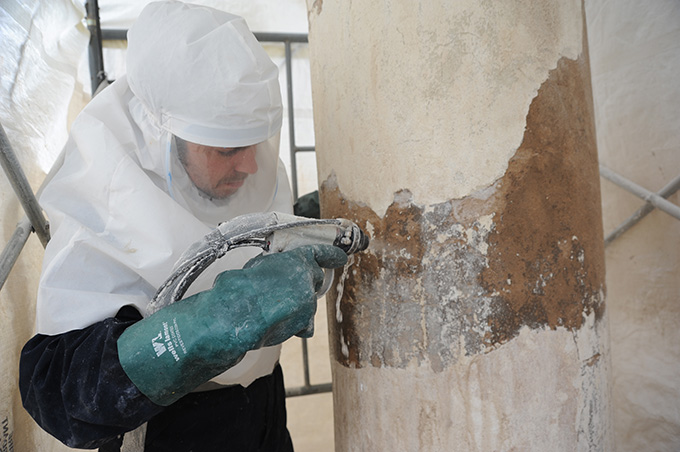 We know from three separate rounds of analysis that this tan-colored material originally remained exposed for a long period of time because of the heavy dirt layer that exists on the surface beneath the first coat of off-white oil paint. The fact that oil paint was used as a first coat is also very important piece of evidence. Lime based materials are very alkaline and react with oil paints, breaking them down. Many years would have been necessary for the rendering to fully cure before oil paint could have been successfully applied. 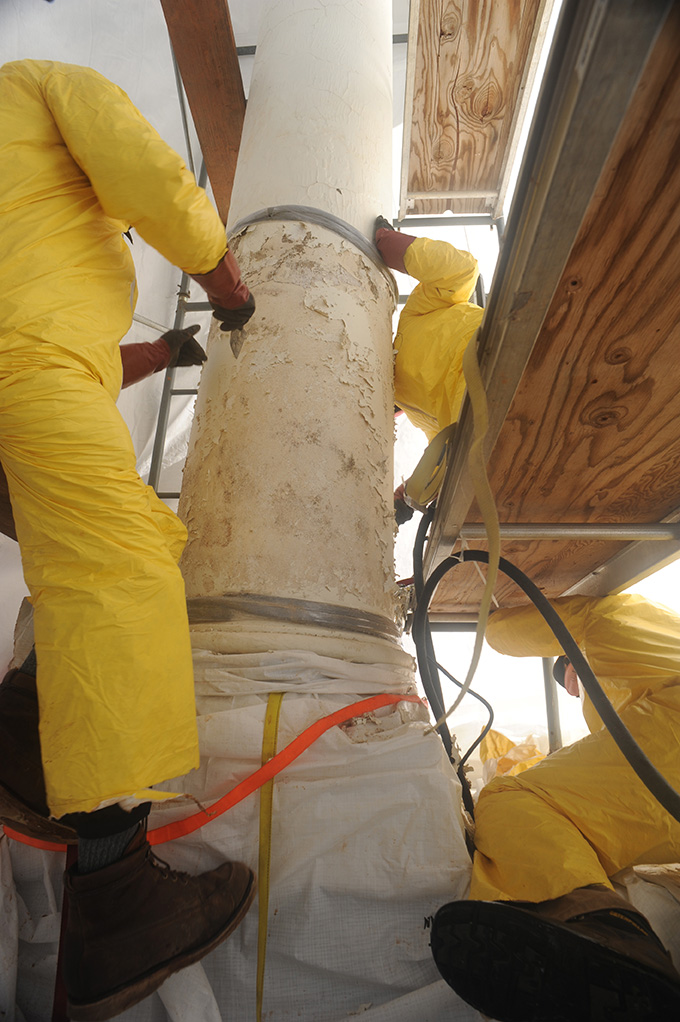 If the columns had been painted during Jefferson’s time a lime-based whitewash, which is compatible with masonry and plaster surfaces, would have been used, not oil paint. Over the years, at least 19 additional coats of white paint were applied.

Finally, the fact that the East Portico columns and rusticated woodwork were sand-painted to look like stone strongly suggests that Jefferson would have wanted the West Portico to have a similar appearance. 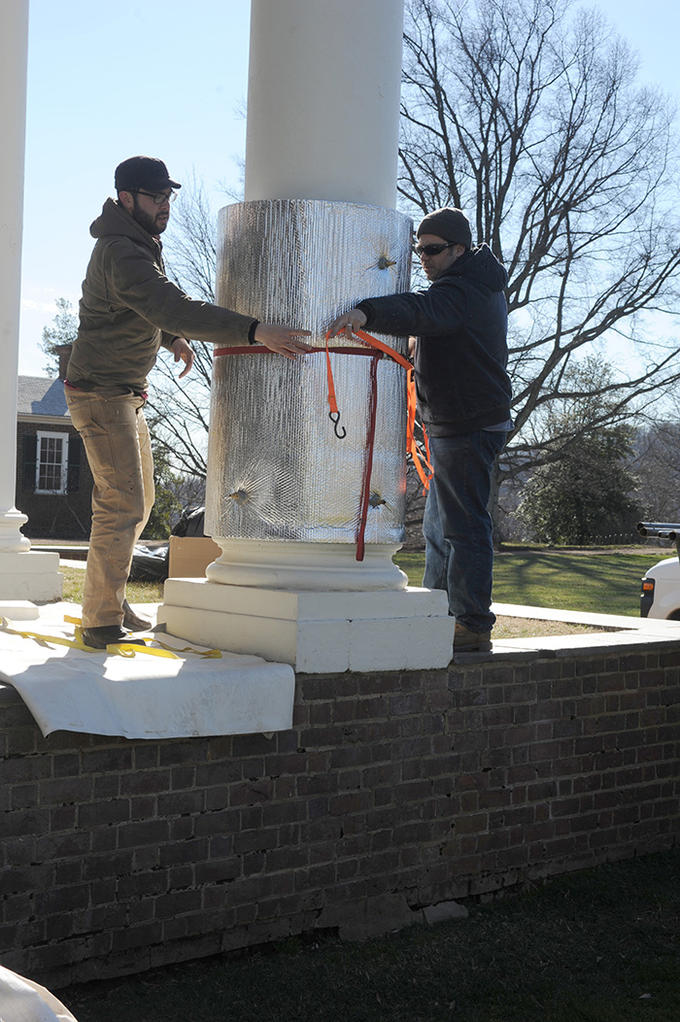 Monticello’s architectural team, headed by Robert H. Smith Director of Restoration Robert L. Self, has taken great care to ensure the project would have no negative effects on the columns.

An architectural conservation team designed and is now implementing the conservation process. Materials Conservation Co., LLC of Philadelphia used a combination of steam-based paint removal and a special blasting system (originally developed to clean the Statue of Liberty in 1986) to complete the project safely and efficiently. 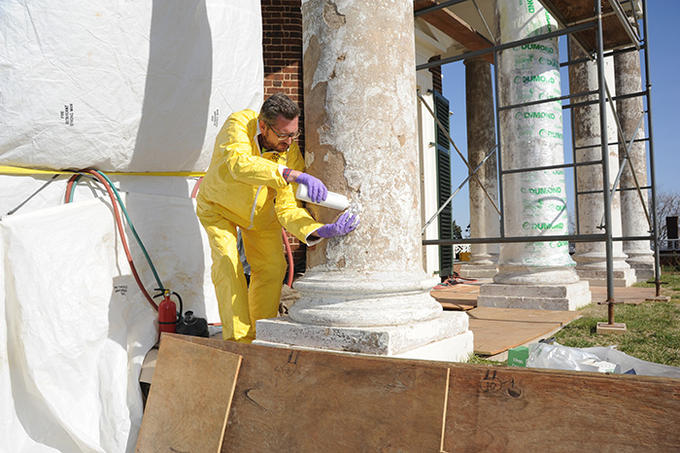 The final phase of conservation began in April. The remaining paint was removed and the Jefferson-era render will be repaired as necessary using period-appropriate materials; the earlier repairs will be re-painted to match the historic surface. The final phase of the project is scheduled to be finished before the Fourth of July for all of Monticello’s visitors to enjoy.

The West Portico columns once again appear as Thomas Jefferson knew them in the final years of his life. 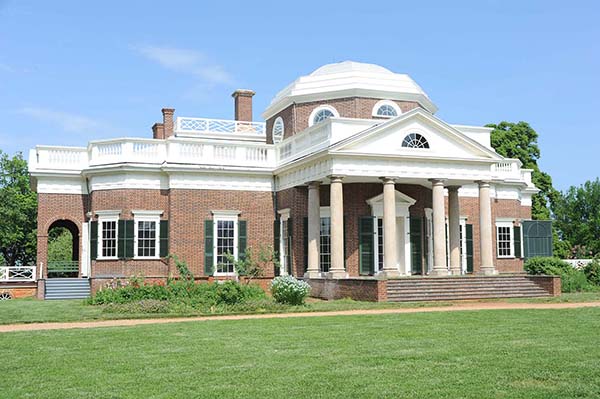