The “Most Beautiful Room in the House” and the “Fairy Palace”

The Dome Room and the Cuddy are two very different spaces situated adjacent to one another on the third floor of Monticello, but they are alike in that neither has been visited much over the life of this busy house.  In 1809 Margaret Bayard Smith, Jefferson’s friend and frequent guest, called the Dome Room “the most beautiful room in the house” but went on to lament that it was “not furnished and…not used, which I thought a great pity.”  Just off the luminous and architecturally sophisticated Dome Room, a pair of doors opens to a cramped attic space which two of Jefferson’s granddaughters commandeered as their own.  One of these young women, Virginia Randolph, described this unfinished room, which she called a “nice little cuddy,” as a “fairy palace,” in spite of a broken window pane, cracks in the floorboards, and shabby furnishings. 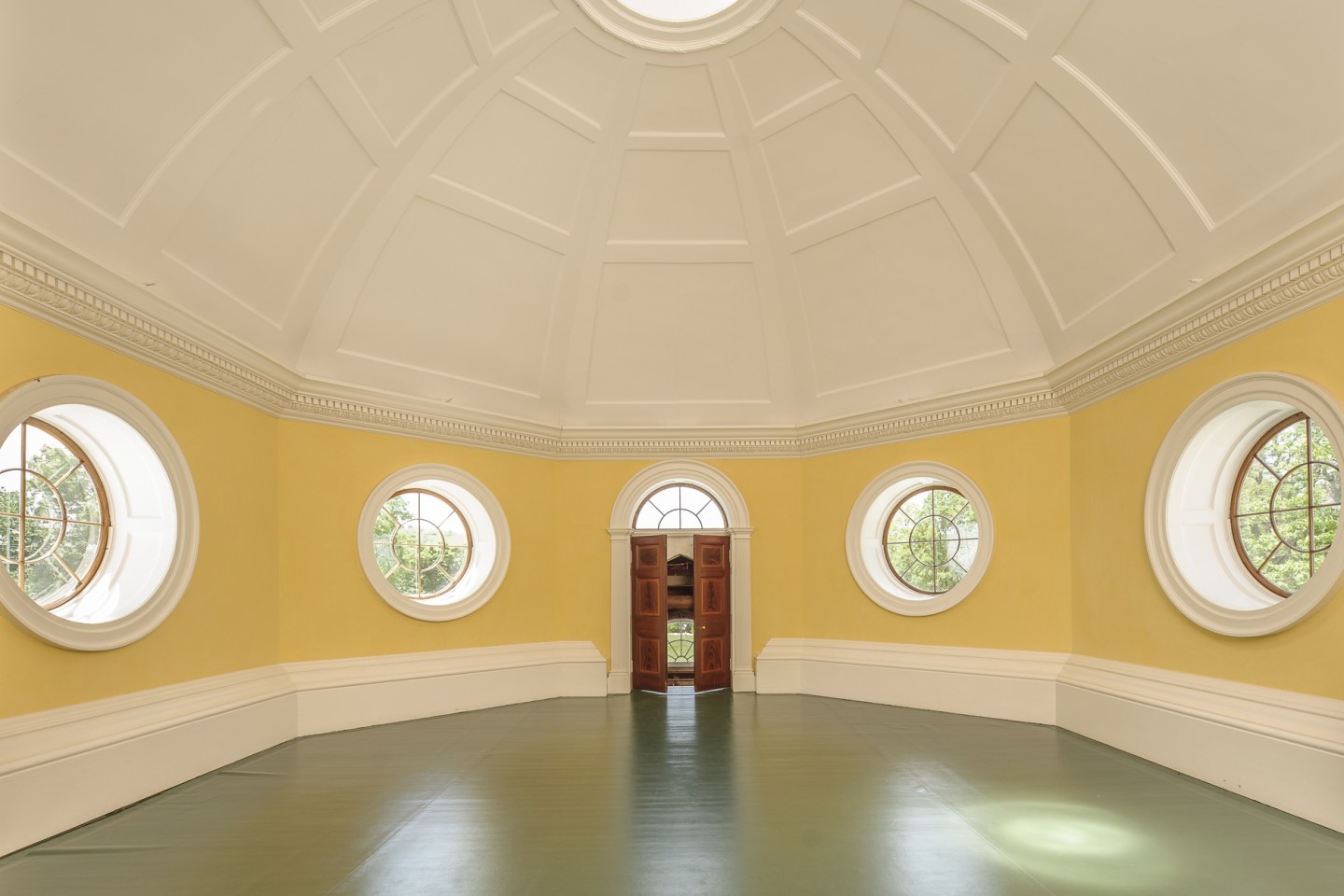 The Dome Room as restored today, with the doors to the Cuddy at the back

Adding a dome to one’s house was unheard-of in America during Jefferson’s time.  Domes are complicated to engineer and construct, and when Jefferson brought the idea back from his stint in Europe in the 1780s, it may have seemed an impossible folly.  In fact, Jefferson described the builder he hired for this purpose as “[a] very coarse & uniformed carpenter…who never heard of a dome before.”  But Jefferson was nothing if not determined, and his surviving letters, drawings, and written calculations vividly portray his intimate involvement in the construction of his dome.  The result made his house quite dazzlingly new to American eyes.

Jefferson got his dome, but the space inside seems to have been almost an afterthought.  It is a grand octagonal space lit from above by a large oculus, but out of the way to the point of being almost inaccessible to the rest of the house.  Jefferson nevertheless lavished attention on its architectural refinement, taking references from the Roman Temple of Nerva Trajan, as published in the Four Books of Architecture by Renaissance architect Andrea Palladio.  This, then, is no unfinished attic.  Its proportions and ornament make it a very erudite space, one of the grandest and most carefully conceived of its time and place.  But the Dome Room had no defined function, nor was it visited by many of Jefferson’s steady stream of guests.   Margaret Bayard Smith noted that it had, by her visit in 1809, been “abandoned to miscellaneous purposes.”  This space, unheated like the rest of the third floor, Jefferson sometimes called the sky-room.  For a brief time in 1815, it was a bedroom for his oldest grandson Thomas Jefferson Randolph and his bride, but for most of its Jefferson habitation it was simply used as storage.

Various theories have been put forth about Jefferson’s plans for the space, including a great-granddaughter’s remembrance that he had intended to use the Dome Room for billiards.  But the access to the upper floors was via two tight, tucked-away staircases, which meant that purposes that involved numerous people getting to the third floor were impractical.  Interestingly, in the mid-nineteenth century, a period photo shows that during the ownership of the Levy family, a billiard table was placed in the Dome Room. 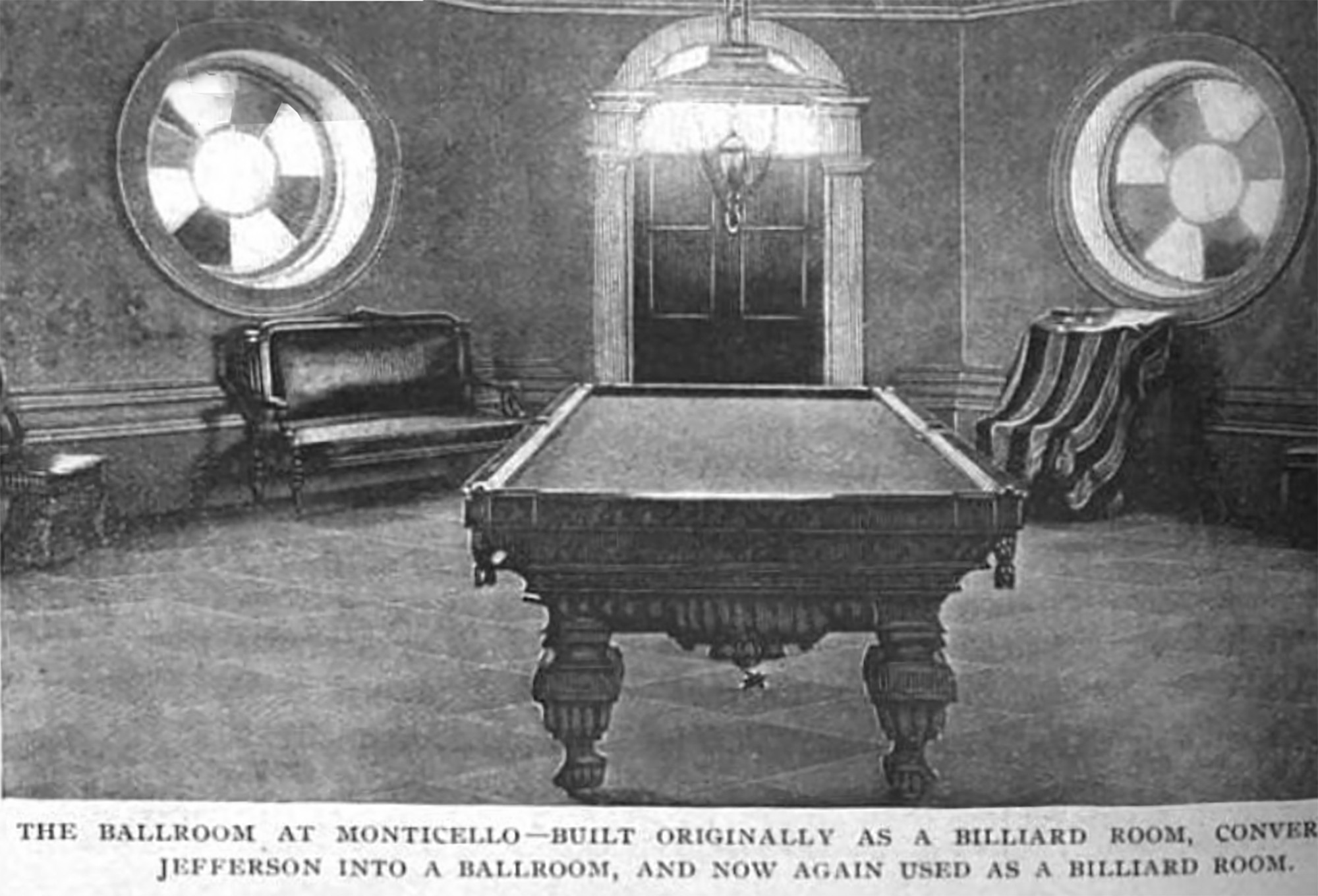 An 1899 photo shows a Victorian billiard table, stained glass in the roundels, and the incorrect statement that Jefferson “converted” the Dome Room into a ballroom

The uses of the beautiful Dome Room remain something of a mystery, but we know a good deal about the tiny unfinished space just to the west—the so-called Cuddy.  This name came from a mention in an 1823 letter in which Virginia Randolph wrote to her fiancé Nicholas Trist about the space over the parlor portico that had “become my haunt.”   Virginia further detailed how, after “Grand Papa” had the work bench removed following the completion of the portico columns below,  she and her sister Cornelia made steps out of boxes, brought in a sofa (“alas! without cushions”) and other pieces of furniture from elsewhere in the house to make the space their own. 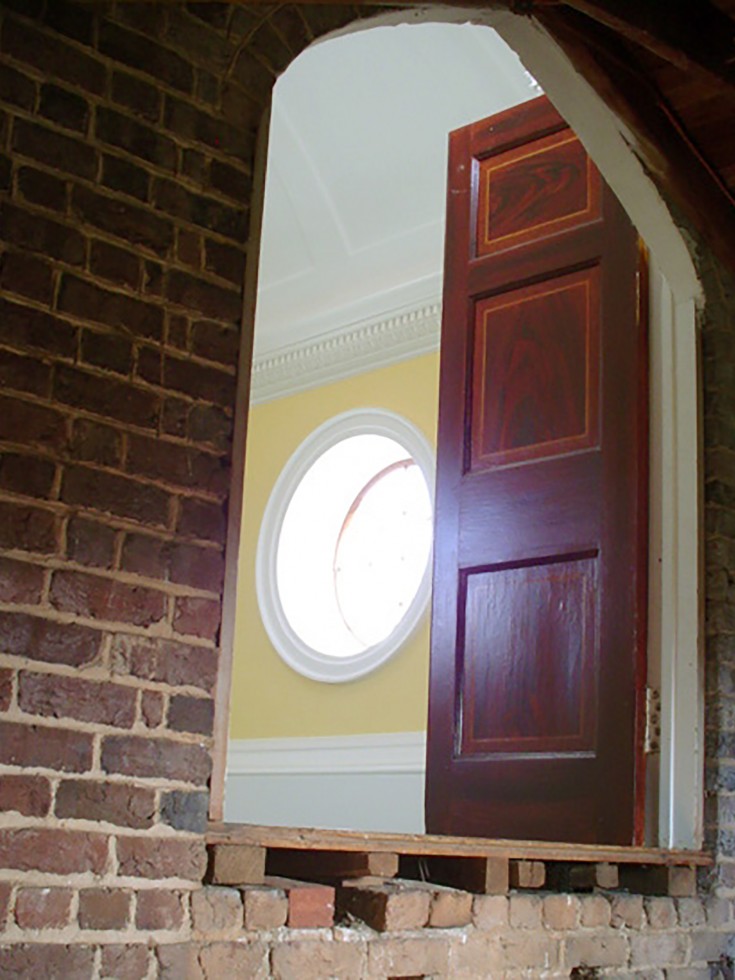 The opening between the Dome Room and the cuddy (foreground) shows the stark differences between the finishing of the two spaces.

In a large, busy house, these two women had to find an out-of-the-way, if uncomfortable, spot to have some moments to themselves.  Their mother, Martha Jefferson Randolph, had trained them and their sisters from their childhood to help in household management, in anticipation of their expected role as adults.  Management meant constant supervision and planning, and never being out of earshot, especially while carrying the keys that unlocked the various storage areas for valuable meats, beverages, spices, textiles, and the like.  Not surprisingly, these young women, when they were able to escape household responsibility, sought privacy.  But privacy in the early 19th century in general, and in Thomas Jefferson’s house in particular, was hard to come by, making even a rough space on the top floor look appealing.  Virginia Randolph wrote breezily that even the “dirt daubers, wasps, and humble bees” with whom they shared the Cuddy wouldn’t deter her, and she would not give it up except to the “formidable rats” which had not yet found her “fairy palace.” 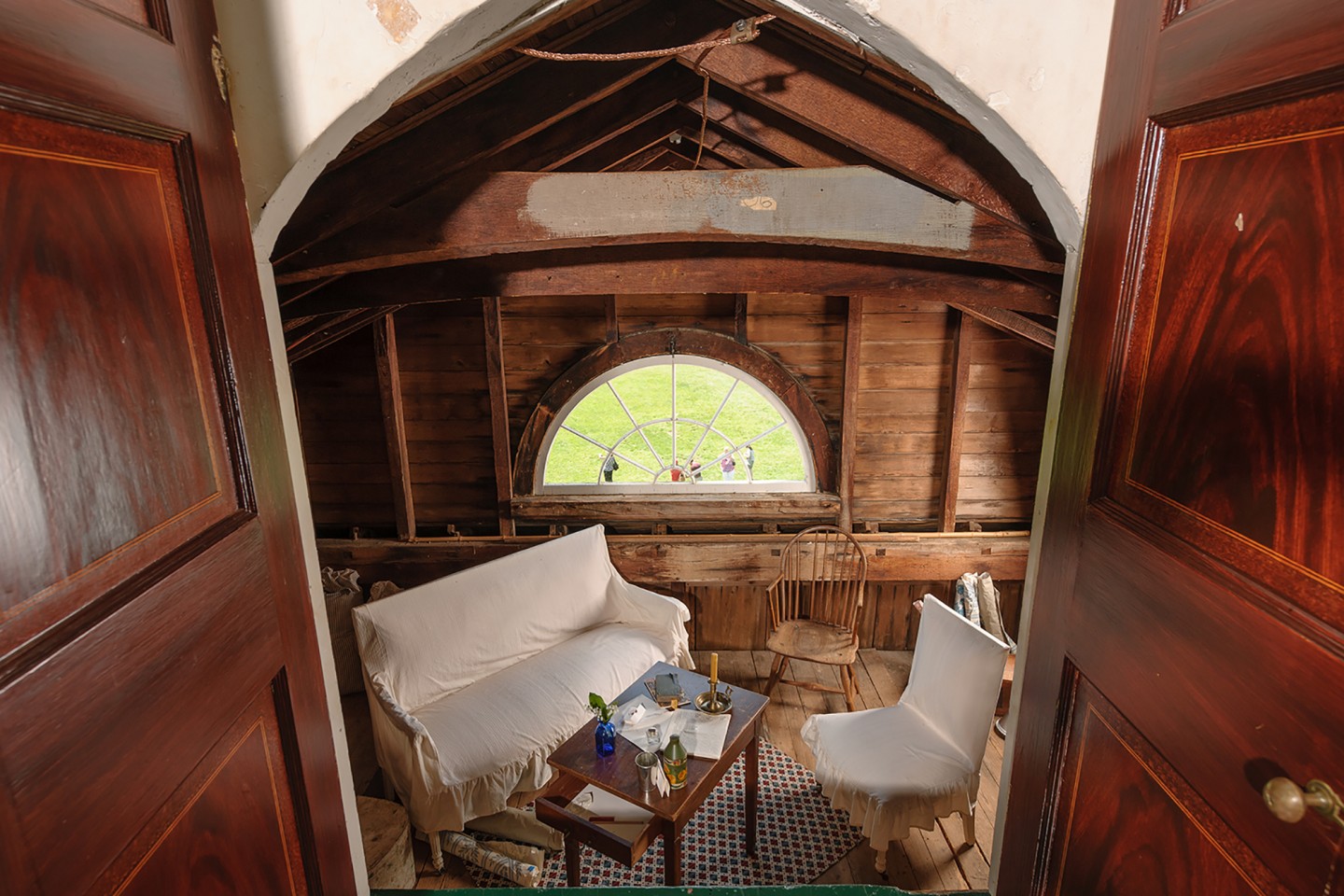 The Cuddy, as it is currently re-imagined based upon Virginia Randolph’s letter

And what members of the enslaved population may have worked in the Dome Room or the Cuddy?  What did they think about the beauties of the former and the roughness of the latter?  Certainly, enslaved women cleaned and tended the other rooms on the upper floors and cared for the Randolph family children in the second-floor nursery.  What was their experience of the Dome Room?  Did enslaved women clean the Cuddy for the Randolph sisters?  We don’t know the answers, but one thing we know for sure: the two sets of narrow stairs, only 24 inches wide, that were inconvenient for Jefferson’s white family and guests, made the lives of the enslaved who worked on the upper floors of Monticello much more difficult.   Carrying the tools and materials necessary for the incessant chores of the household up the winding staircases must have made the hard work of the enslaved house servants even harder.  But perhaps the fact that the Dome Room wasn’t used for social occasions or, for the most part, for habitation, made it one less space in the house that had to be cleaned and taken care of.

Visitors to Monticello through the years frequently have wondered how furniture was taken to the second and third floors of the house, given the tightly compacted turns of the stairways.  We don’t fully know the answer, but the curatorial team in recent years has used the half-round window in the Cuddy to hoist furnishings into the upper floors.   This may have been one of the methods used by enslaved servants as well, when ordered to move large objects upstairs, which was efficient but might have been a bit of an intrusion on Virginia and Cornelia’s privacy in their “fairy palace.” As part of the restoration of the upper floors, staff moves objects through the west portico window in 2014

Interesting aspects of the behind-the-scenes lives of some of Monticello’s inhabitants may be read in  the differing uses and contrasting appearances of the Dome Room and the Cuddy.   Even in Jefferson’s well-ordered household, there were gaps between envisioned versus actual use: the architecturally sophisticated Dome Room had no defined function, while the unfinished attic Cuddy for a time served a very specific purpose, as a hideaway for some of the women of the household looking for privacy and a place of their own.