Summer and Fall-flowering Shrubs: Time for a Late Winter Haircut!

by Lily Fox-Bruguiere - March 13, 2013
Are you looking for ways to get back in the garden again after a long, cold winter spent indoors? Happily late winter, before the new buds break, is the perfect time to prune dormant shrubs that bloom on “new wood.”.Generally, these are shrubs that bloom during the summer and fall; such shrubs include American Beautyberry (Callicarpa americana), Chaste Tree (Vitex agnus-castus), Butterfly Bush (Buddleia davidii), and summer-blooming Spireas, as well as repeat-flowering classes of Roses like Noisettes and Musks. If you have spring-blooming shrubs, like Forsythia and Lilacs, do not prune at this time of year because you will be removing the flower buds which were set on last year’s wood, or “old wood;” instead, prune the spring bloomers right after flowering, if necessary.

Noisette Roses in the Léonie Bell Rose Garden in August, 2012.

The same roses after late-winter pruning in February 2013. 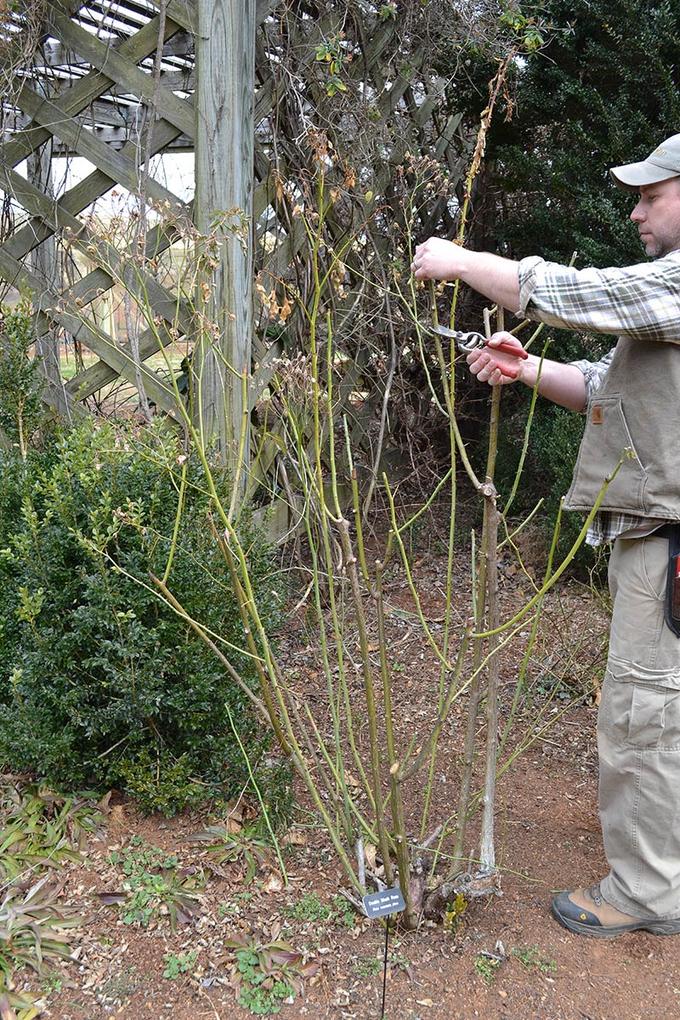 Here at the Thomas Jefferson Center for Historic Plants at Monticello, we have a number of summer and fall-blooming shrubs that require substantial pruning at this time of year. We often start with the time-consuming task of pruning our large collection of Noisette and Musk Roses in the Léonie Bell Rose Garden. Carefully pruning these repeat-flowering roses helps to increase blossoms, improve air circulation for disease reduction, and maintain desired size and shape. When pruning roses, cut out old, weak canes, crossing branches, and any dead, diseased, and damaged stems. Remove unwanted stems by making a clean cut at an angle just above an outward facing bud to encourage branching away from the center of the plant. When you have finished pruning your roses, be sure to clean up and throw away all canes, stems, leaves, and spent flowers to prevent the spread of disease. 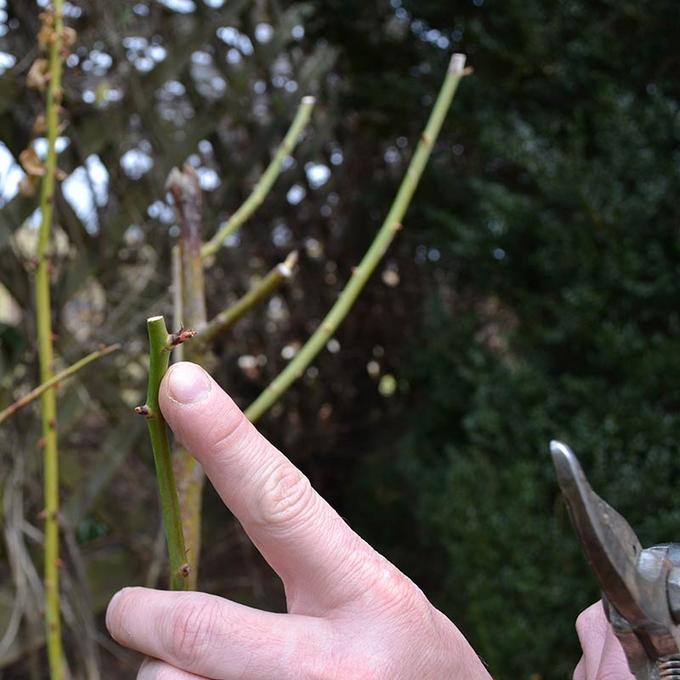 An example of an outward facing bud on a Double Musk Rose. 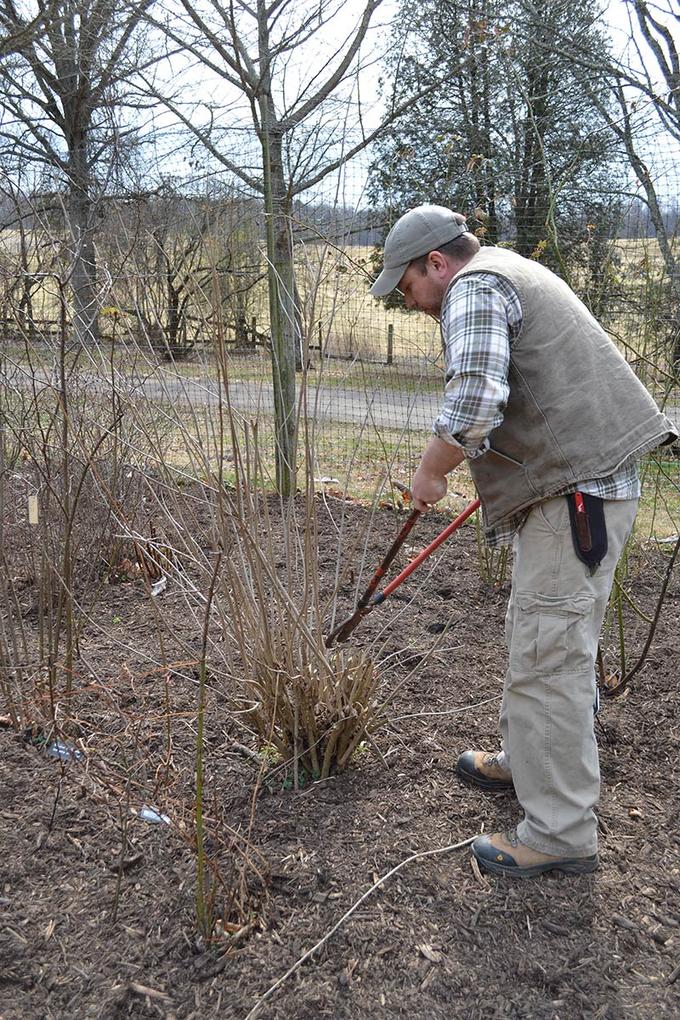 Pruning an American Beautyberry back to its woody base in late winter, 2013.

While it may seem painful at first, it is also important to prune some shrubs back every year to their woody base, usually within 8”-12” of the ground. This type of renewal pruning, also called stooling, promotes a profusion of flowers and a clean shape in shrubs such as Beautyberry and Butterfly Bush. Sharp loppers, and sometimes pruners, are typically the best tools for this job because the old stems will have thickened quite a bit in one year’s time. 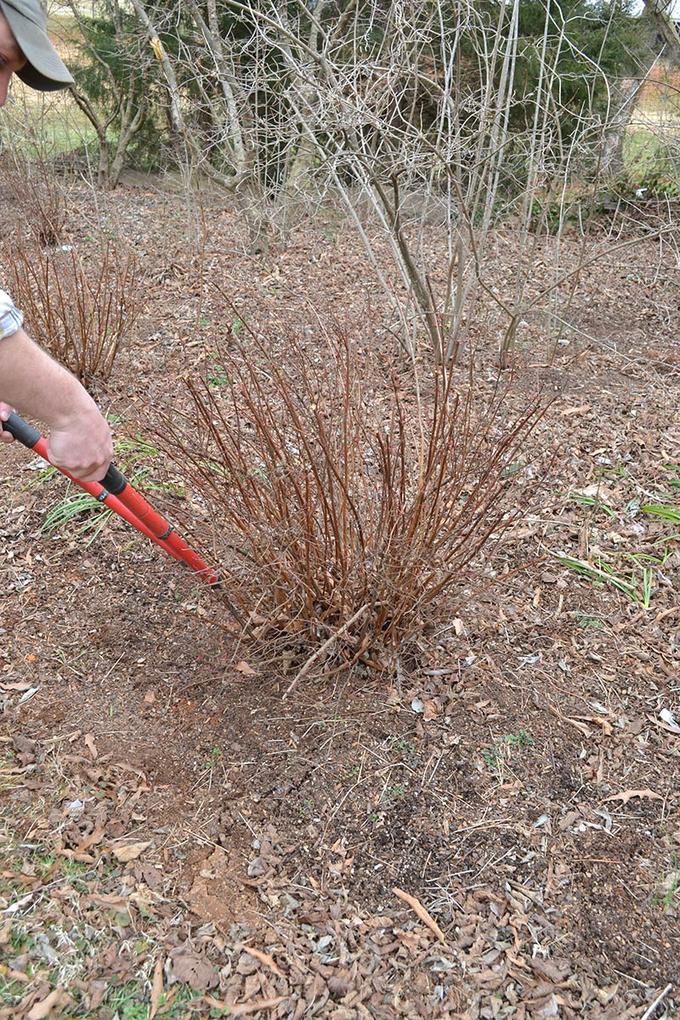 To give vase shape, turn shears over and prune around the outside of the shrub.

Other summer and fall-blooming shrubs do not need to be cut all the way back to the woody base, but still respond well to a late winter pruning to encourage lots of flowers and a healthy, proper shape. While spring-blooming Spireas like the Bridalwreath (S. prunifolia) should be left alone at this time of year, Japanese Spireas (S. japonica) and the Bumalda Spireas like ‘Anthony Waterer’ benefit from a combination of heading back and thinning in late winter. The pruning methods you choose often depend on the appearance that you are aiming for (heading back or hedging for dense and formal, or thinning for airy and natural, etc.). However, heading back and hedging can cause the outer growth of the plant to be overly dense, which can lead to die-back in the center of the plant; therefore, it is best to also thin out one-third of the older stems in order to allow some light and air to reach the plant’s interior. Crape Myrtles (Lagerstroemia indica) and Rose of Sharon (Hibiscus syriacus) also respond well to this type of pruning in late winter while they remain dormant. 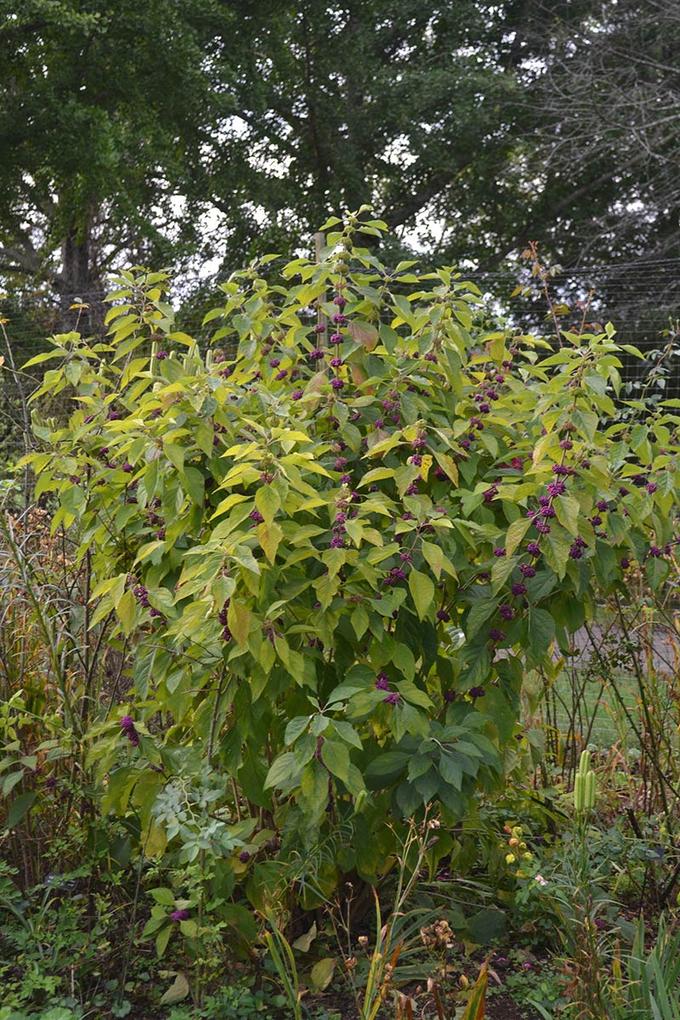 The same American Beautyberry above in late 2012 after one season's growth.