“...the finest piece of history which has ever been written by man."

Thomas Jefferson sold his extensive collection of books to the nation in 1815 to replace the congressional library destroyed when the British burned the United States Capitol the previous year. Famously declaring that “I cannot live without books,” he quickly began ordering replacements of titles that were particularly important to him. Jefferson eventually amassed a final retirement library of around 1,600 volumes. He succeeded in acquiring many of the works by classical Latin and Greek authors over which he delighted to muse in the evenings. Despite repeated attempts, however, one title escaped him: a work by John Baxter published in London ca. 1796–1801 and entitled A new and impartial History of England, From the most Early Period of Genuine Historical Evidence to the Present Important and Alarming Crisis. 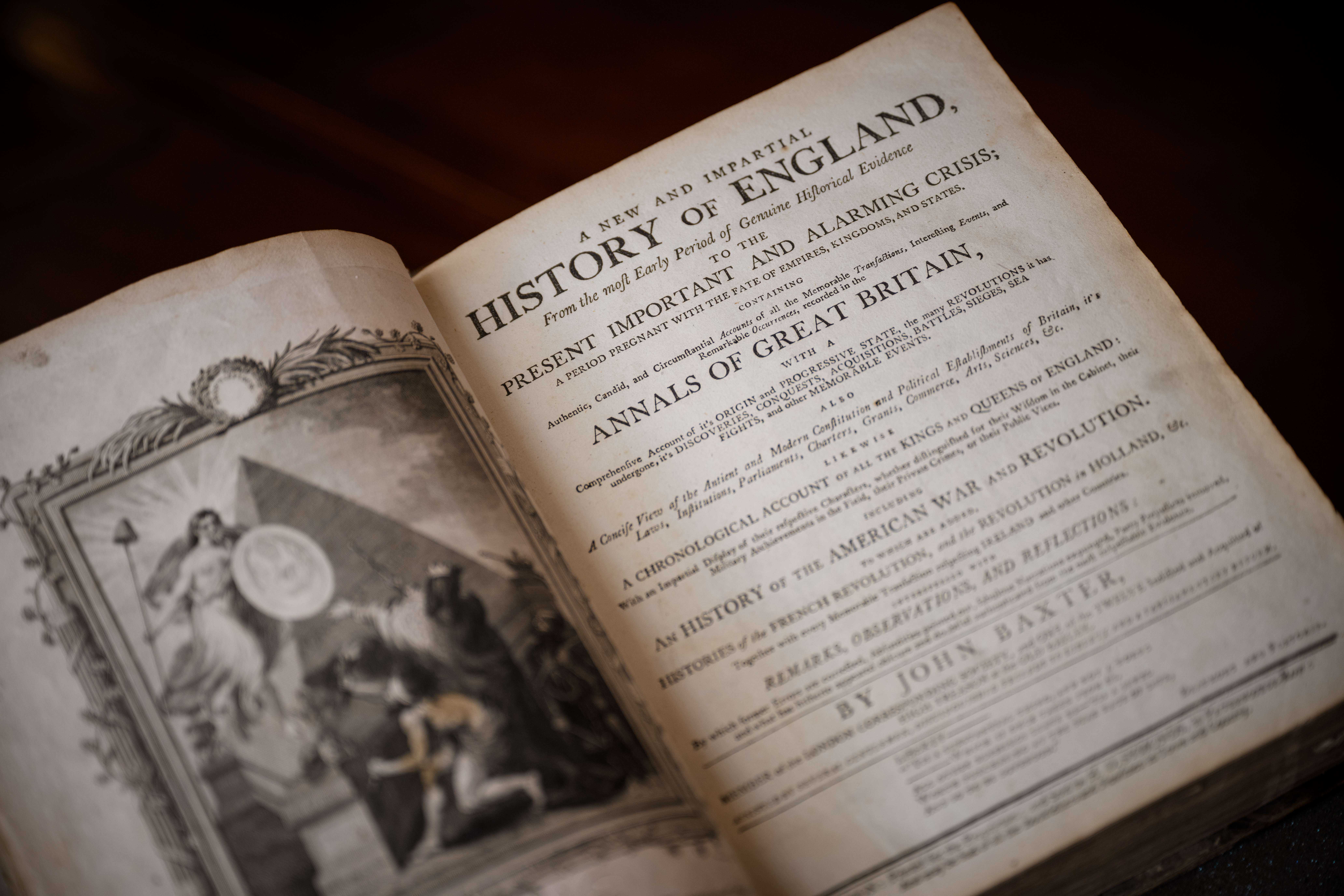 Title page from the Jefferson Library's copy of John Baxter's A new and impartial History of England, From the most Early Period of Genuine Historical Evidence to the Present Important and Alarming Crisis. (Photo credit: Ian Atkins.)

On at least three occasions, in 1820, 1821, and 1824, Jefferson tried to obtain a replacement copy of Baxter’s history, indicating that he would prefer a smaller octavo edition if one had been printed but would gladly accept the much larger quarto version if necessary. He also tried repeatedly to persuade American publishers to reprint Baxter, and on multiple occasions he added the title to recommended reading lists, including suggestions for purchase by the Albemarle Library Society and the University of Virginia. All of these efforts failed. The work was not reprinted in England or the United States, and no used copies could be found for purchase by Jefferson or the University. Despite his best efforts, Jefferson never saw the book again after it departed in the wagons carrying his library to Washington. And even that copy was lost in a second fire at the Library of Congress on Christmas Eve of 1851.

Why was Jefferson so enthusiastic about a work that seems to have attracted few sales and little subsequent interest?  He explained that it was actually an adaptation of  David Hume’s wildly popular and frequently reprinted History of England (1754–61). Jefferson despised Hume’s work for its overtly Tory slant and feared that it would convert American students to similarly conservative political principles. In a departure from his stated belief that truth would triumph in a free marketplace of ideas, Jefferson went so far as to mandate a reading list for UVA law students that pointedly excluded Hume. He observed in 1825 that Hume’s history was especially dangerous because it was so well written that, were it not for its biases, it would be “the finest piece of history which has ever been written by man.”

Baxter had solved the problem: “abridging somewhat by leaving out some entire incidents as less interesting now than when Hume wrote, he has given the rest in the identical words of Hume, except that when he comes to a fact falsified, he states it truly, and when to a suppression of truths he supplies it never otherwise changing a word.” Jefferson approvingly referred to Baxter’s text as “Hume, republicanised.” Since Baxter did not indicate that his work was a bowdlerized version of Hume, Jefferson was thus endorsing what would now be regarded as a major exercise in plagiarism. His failed attempts to import or reprint Baxter’s work in America doomed this scheme and, ironically, Hume’s history was soon being assigned by University of Virginia faculty.

The Robert H. Smith International Center for Jefferson Studies is pleased to announce that the Jefferson Library at the Thomas Jefferson Foundation has recently succeeded where Jefferson was thwarted by acquiring a fine specimen of Baxter’s work, complete with handwritten comments and a drawing by at least one previous owner. Jefferson would presumably have been pleased at its return to Monticello, where it will be available for researchers and possible use in future exhibitions.