Retirement is a wonderful thing, for it allows one the freedom to respond to opportunities as they arise without the need to answer such nagging questions as, “Just when would I find the time to actually do this?” 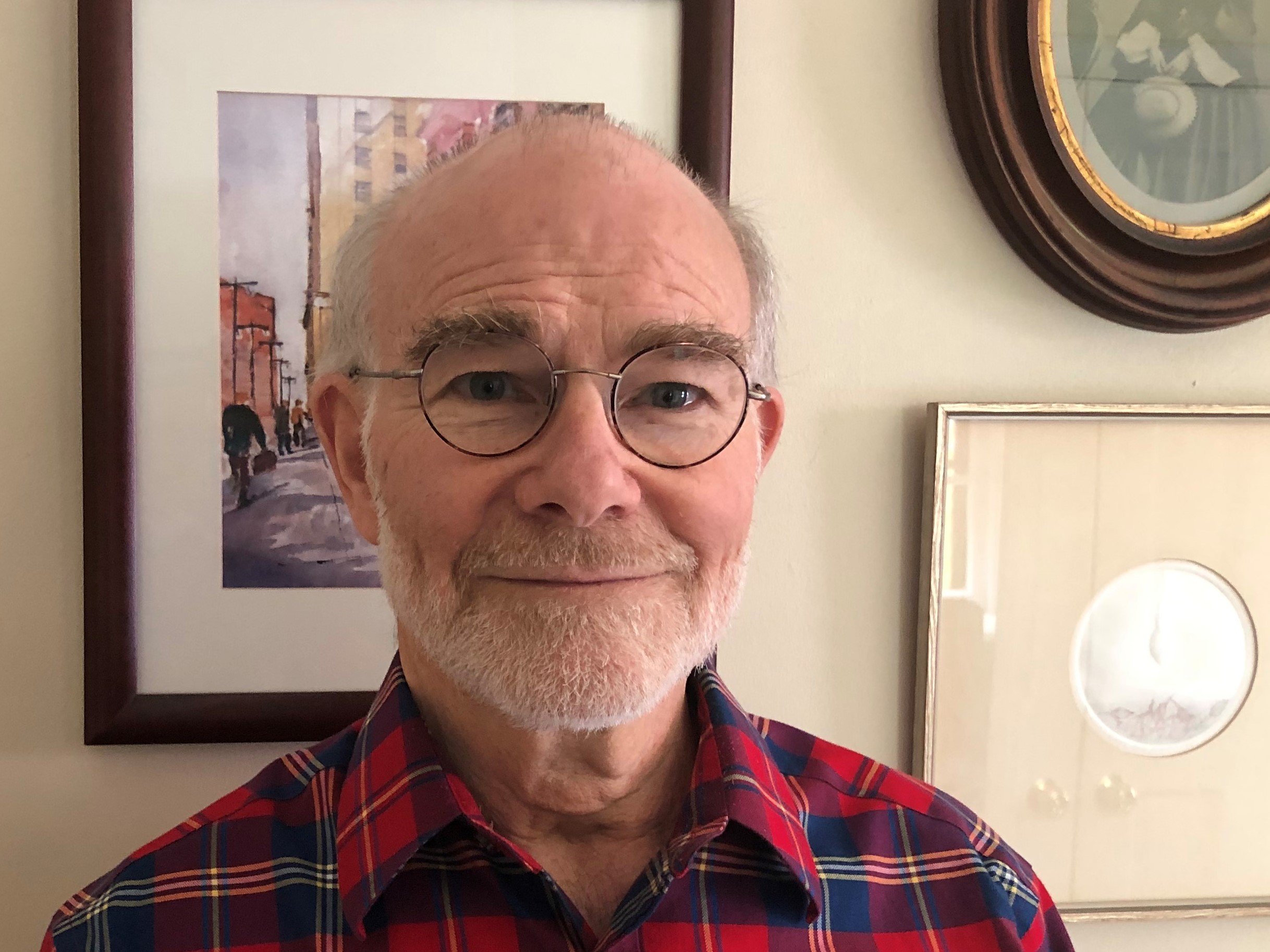 When I retired after thirty years as Director of the Library Company of Philadelphia and was casting about for a worthwhile project relating to Thomas Jefferson to undertake, I had the good fortune to have a timely conversation with J. Jefferson Looney, the Editor of the Papers of Thomas Jefferson: Retirement Series. The discussion turned to Jefferson’s so-called “Anas,” the seventy-five or so informal memoranda of meetings, conversations, and gossip that Jefferson recorded on scraps of paper during his years as Secretary of State (from mid-April 1790 until his resignation at the end of 1793). These precious documents have provided historians with some of the most uninhibited and revealing insights into American politics as the first party system was forming. The “Anas” memoranda have traditionally been published together, as if Jefferson had created a discrete collection of such documents. He did not, nor did he ever call them the “Anas,” a name applied to them when they were first gathered for publication by his grandson Thomas Jefferson Randolph in 1829.

In fact, they had once been part of a larger collection of more than 800 letters, reports, and memoranda documenting Jefferson’s time in Washington’s first Cabinet. Jefferson compiled the documents about 1801 or 1802 and had them bound into three folio books. As Jefferson stated in his 1818 “Explanations of the 3. volumes bound in Marbled paper,” his principal motive in compiling them was to gather material that could be used to produce a history of the era to counter the Federalist narrative being propounded by arch-Federalist Chief Justice John Marshall. He felt it necessary to document his story, to gather the raw material out of which a Republican history could be written. Jefferson feared losing the battle to control the narrative to his nemesis Marshall, whose work in progress -- the five-volume Life of Washington – had traduced the reputations of the Republicans and bid fair to cement the Federalist account as the established, orthodox interpretation of the founding era.

The “3. volumes” no longer exist as physical entities, having been disassembled by the Library of Congress early in the twentieth century in what has been described as an “act of archival vandalism.” The documents were then dispersed chronologically throughout Jefferson’s papers there, seemingly effacing from the historical record the documentary history that Jefferson had so laboriously created about a century earlier. But the discovery in the 1980s that a six-page list in Jefferson’s hand was the “table of contents” of the three volumes opened new possibilities. Jeff Looney showed me a paper he had delivered at a 2012 conference on “Thomas Jefferson’s Lives” in which he advocated vigorously for the preparation of a new edition of all the documents that once comprised the “3. volumes.”[1] Yet some version of virtually all of these 800 documents had already been published, according to their dates, across a dozen volumes of the Jefferson Papers. Jeff’s idea had merit, but it did not seem likely to be realized any time soon. So it occurred to me that if the “3. volumes” could not be recreated physically within a couple of supplementary volumes of the Jefferson Papers, why not do it virtually as an online resource? Such a solution was feasible thanks to the freely accessible electronic collections of Jefferson’s (and other Founding Fathers’) writings via the National Archives’ Founders Online website (and also through the University of Virginia Press’s Rotunda website). The digital age would enable us to restore to the historical record the documentary history of his tenure as Secretary of State that Jefferson had so meticulously compiled, but that had been hidden from view for more than a century. 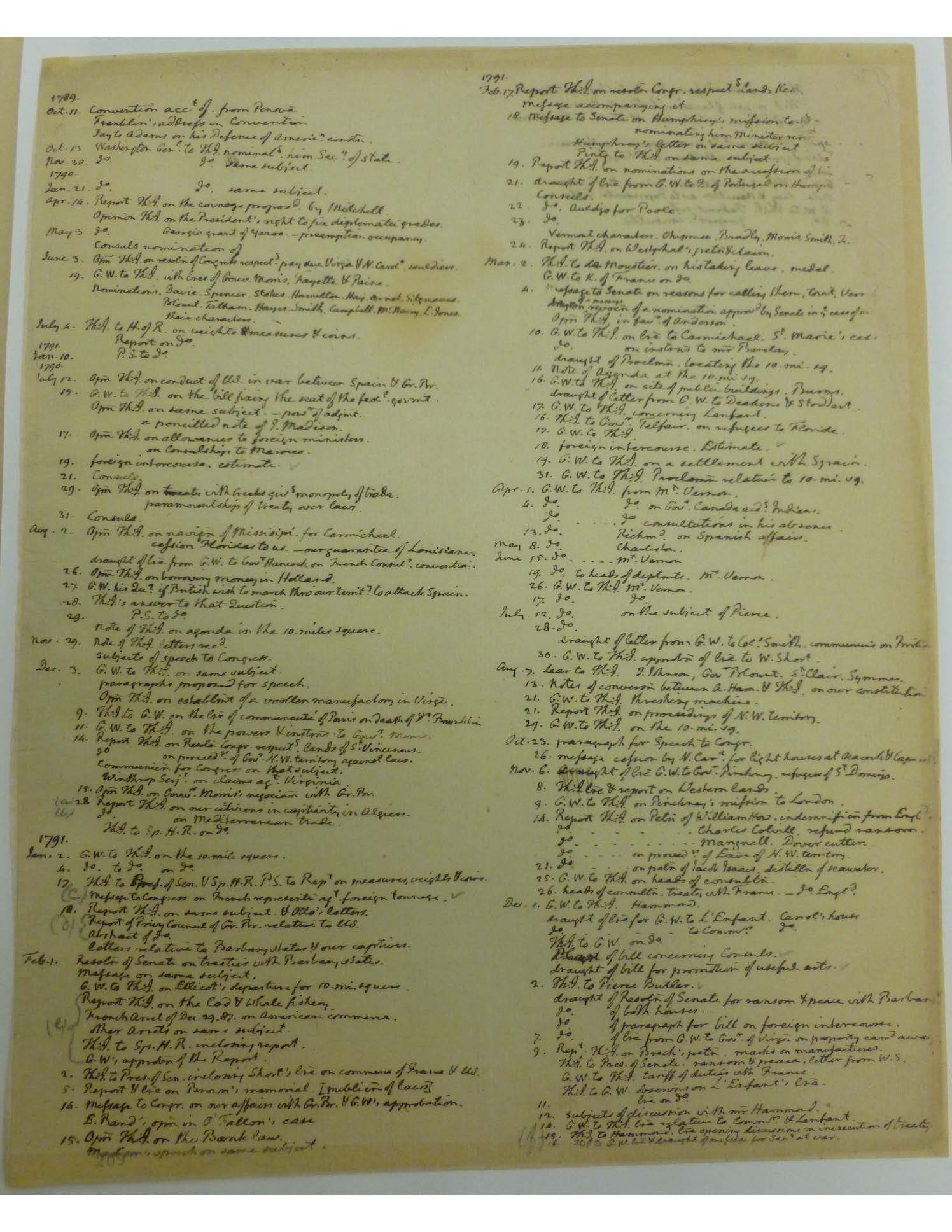 Page one of the six-page list in Jefferson's hand. © 2018 The Trustees of Princeton University

With Jeff’s encouragement I therefore set about to produce such a virtual “3. volumes.” It took a couple of years of reasonably steady work (including a fellowship from the Robert H. Smith International Center for Jefferson Studies) to transform Jefferson’s spare six-page list into a database with detailed information about each of the more than 800 documents. But then what? I certainly was not capable of transforming the database into an attractive, functional website. Fortuitously, James McClure, the General Editor of the Jefferson Papers at Princeton, adopted the project as the Papers’ first digital resource, and members of his staff added subject headings and the names of people mentioned in the documents. Then Jennifer Stertzer, Director of the Center for Digital Editing at the University of Virginia, enthusiastically took on the project and turned it over to Project Developer Erica Cavanaugh, who designed and built the website. At that stage other important elements were added: the timeline; the documents and annotation (imported from Rotunda); and all the searching and sorting functionality that make the website so user-friendly.

And the rest, as they say, is history, in this case literally. If you want to study Jefferson – or political gossip in the eighteenth century – please check out http://jefferson3volumes.princeton.edu/  and begin exploring anew Jefferson’s central role in the politics of the early 1790s.

John Van Horne was Director of the Library Company of Philadelphia from 1985 to 2014. He was formerly Editor of The Papers of Benjamin Henry Latrobe. A graduate of Princeton University who received his master’s and doctoral degrees from the University of Virginia, he has been Fellow at the Robert H. Smith International Center for Jefferson Studies on several occasions since his retirement. He can be reached at jcvanhorne@comcast.net.

[1] Since published as J. Jefferson Looney, “Merely Personal or Private, with Which We Have Nothing to Do,” in Robert M. S. McDonald, ed., Thomas Jefferson’s Lives: Biographers and the Battle for History (Charlottesville: University of Virginia Press, 2019): 25-46.