Gossip, Dueling, and Political Culture in the Early Republic 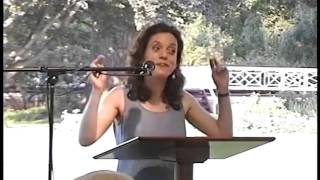 Historian, author, professor, and former former Fellow at Monticello's Robert H. Smith International Center for Jefferson Studies, Joanne B. Freeman gives an impromptu talk on Jefferson, Hamilton and Burr and her work on political dialogue during the Early American Republic (from July 22, 1999) Play all »

Fightin' Words, or "Who are you calling a puppy?" (3:52)
How, when and why duels were provoked by politicians during the Jeffersonian era.

The Weapons of Combat (2:14)
Other means beyond dueling that politicians used to defend their honor.

A Politically Correct Number of Horses (2:40)
Dress and behavior were seen to express a person's politics.

Aaron Burr: "Guys I Hate" (6:24)
The Election of 1800 and the enmity that arose between Jefferson and his "running mate."