On April 16, 1807, Thomas Jefferson recorded in his Weather Memorandum Book that a tulip poplar tree had been planted just outside the window of his Private Suite. The tree continued to grow and flourish long after Jefferson’s death in 1826. It was even featured in the very first photograph taken of Monticello in late 1860.

This tulip poplar continued to bear silent witness to decades of history, eventually growing to an impressive height of 115 feet with a circumference of 22 feet. In time, however, the tree’s health began to decline. By 2008 Monticello made the tough decision: remove the ailing tree to eliminate the possibility of it damaging the house or wings of Monticello. Still, it was discovered that a second tree needed to be felled and was also taken down by 2012. Once the trees came down, a question remained: what to do with the wood that shaded Monticello for over two centuries? 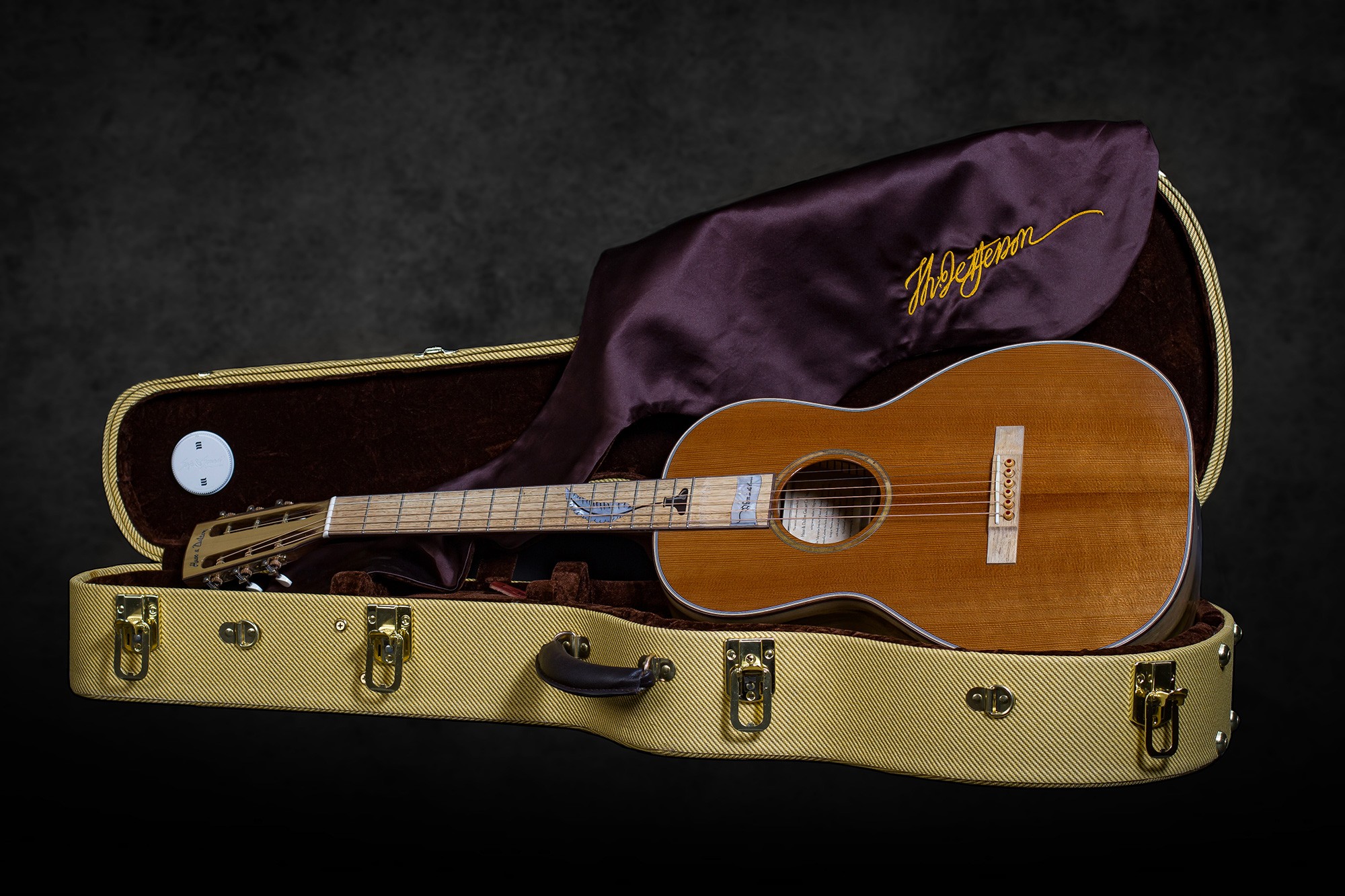 Over the years, the wood from these two trees has been distributed to craftsmen throughout the region and is being repurposed for a variety of different projects. One project that’s particularly exciting is Monticello’s partnership with Huss & Dalton Guitar Company.

Jeff Huss and Mark Dalton are top-shelf guitar builders who operate Huss and Dalton Guitar Co., based in Staunton, Virginia. Their business took root in the summer of 1995 and since then, they’ve been building guitars inspired by traditional American history. For luthiers so inspired by history, the joy at an opportunity to build a guitar from trees that were planted at the home of the third president was too great an opportunity to miss.

Light-weight, full-bodied, and bursting with color, the guitars that were built from Jefferson’s poplar trees are labeled the Jefferson Edition 00-SP. Drawing inspiration from the small bodied 00-SP models, these guitars combine hand crafted experience with machined precision to deliver well defined, earnest notes. The action on the strings hum warmly in the bass, complementing the crisp mid-range and high notes. When played through, the resonance delivers clear, sustained tones.

What sets the Jefferson Edition apart is the intricately detailed designs. On the back of the body is a laser engraving that bears the introduction to the Declaration of Independence as well as Thomas Jefferson’s signature. The fretboard inlays depict an old-fashioned inkwell and quill pen, similar to those used to sign the Declaration of Independence.

Repurposing some of Monticello’s oldest trees into guitars unites two of Jefferson’s passions: a love of music and of trees. Visit Huss and Dalton online to learn more about the Jefferson Edition 00-SP, and explore our collection of home décor of gifts inspired by American history at the Shop at Monticello.