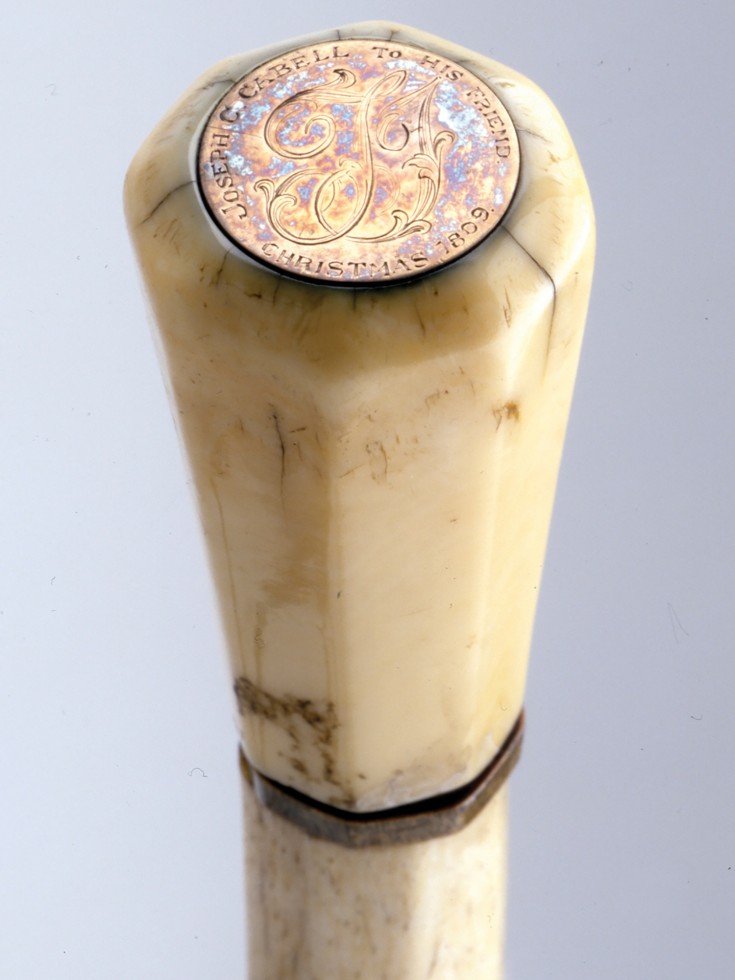 Historical Notes: In 1809, the young Virginia congressman Joseph Cabell presented this walking stick (engraved "TJ," "Joseph C. Cabell to his friend Christmas 1809") to Jefferson, who had just recently retired from the presidency. Jefferson was first introduced to this fellow Virginian by the Philadelphia physician and botanist Benjamin Smith Barton. Barton sent Cabell to meet Jefferson at the President's House in June 1806, bearing a generous letter of introduction, in which he called him "a young Virginian of uncommon merit."1 Like Jefferson, Cabell graduated from the College of William and Mary and then studied law. He spent over three years in Europe, where he met many of Jefferson's friends, including Thaddeus Kosciuszko, Robert Fulton, and the comte de Volney.2

Cabell entered the Virginia Senate in 1810. Within a few years he became the "main pillar of support" for Jefferson's plan for a state system of elementary, intermediate, and higher education.3  Jefferson described his plan to Cabell as

culling from every condition of our people the natural aristocracy of talents & virtue, and of preparing it by education, at the public expence, for the care of the public concerns.4

Most importantly, Jefferson relied on Cabell to generate support in the Virginia legislature for funding a school that he hoped to begin in Albemarle County. First named the Albemarle Academy, then Central College, this school became the University of Virginia after years of negotiations led by Cabell and Jefferson.5

In his last letter to Cabell, in April 1826, Jefferson wrote:

[W]e have now 166. students, and on the opening of the Law school, we expect to have all our Dormitories filled, order and industry nearly complete & sensibly improving every day.6