A more complete list of visitors to Monticello during Thomas Jefferson's day -- and our own -- includes, in the words of one family member:

To learn about Jefferson through the eyes of his guests, read Visitors to Monticello, edited by noted Jefferson scholar Merrill D. Peterson. Among Jefferson's most prominent and best-loved visitors were the marquis de Lafayette, the Abbé Correia, and James and Dolley Madison. Perhaps the most celebrated visitor to Monticello during Jefferson's lifetime arrived in 1824. The marquis de Lafayette, the French statesman who had led troops on behalf of the colonies during the Revolutionary War, returned to the United States and made a final visit to Monticello. The event was marked by pomp and circumstance -- 120 mounted soldiers escorted the general to Monticello, and a crowd gathered on the grounds to see the two friends meet again, calling each other's names and falling into an embrace. At a Charlottesville dinner in Lafayette's honor, Jefferson urged Americans to honor the Frenchman as their "benefactor in peace as well as in war."

Two of "The Most Learned of the Age" 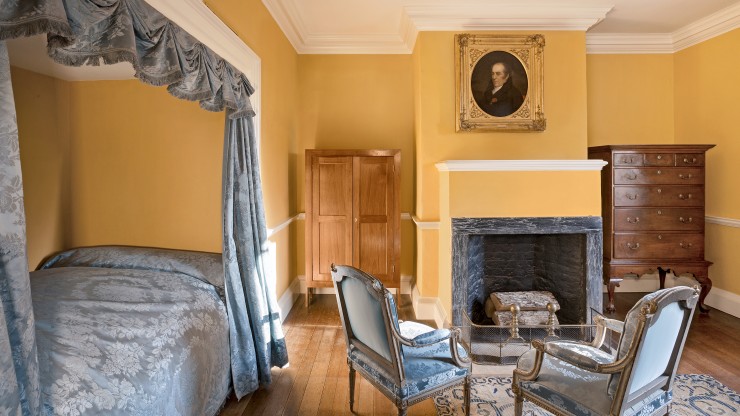 A frequent visitor to Monticello over the years was the Abbé José Correia da Serra. An internationally respected scientist and foreign minister from Portugal, Correia first arrived on the mountaintop with letters of introduction from Lafayette and other mutual acquaintances. He and his host quickly became friends, and Jefferson later wrote that Correia was "the greatest collection, and best digest of science in books, men, and things that I have ever met with; and with these the most congenial and engaging character." Correia made what he called "pilgrimages" to Monticello seven times (in seven years), and was the only person outside of the family ever invited to live there. Although Correia did not accept the offer, the family called one of the first-floor bedrooms Abbé Correia's room.

The Madisons At Monticello

The other first-floor guest room was dubbed the "Madison Room," after President James Madison and his wife Dolley, two regular visitors to Monticello. Madison lived twenty-eight miles away -- a quick trip today, but a day's journey in the 1800s. Jefferson encouraged him and President James Monroe to move to Albemarle County to form "a society to our taste." Madison never did so, but Monroe built Highland two and a half miles away from Monticello. Jefferson and Madison shared many common interests, opinions, and accomplishments. Both are remembered for their authorship of defining American documents, the Declaration of Independence and the Constitution, respectively, and for their support of religious freedom. Since they were politically like-minded, Jefferson hand-picked Madison to succeed him as president. Late in life, Jefferson left the leadership of the University of Virginia in Madison's hands.

Mrs. Madison's ties to the family were also strong. Because Jefferson's wife died in 1782, Mrs. Madison served as the widower's hostess during his first term as president in Washington, D.C. She also befriended his daughters, purchasing items such as wigs and hair combs on their behalf.