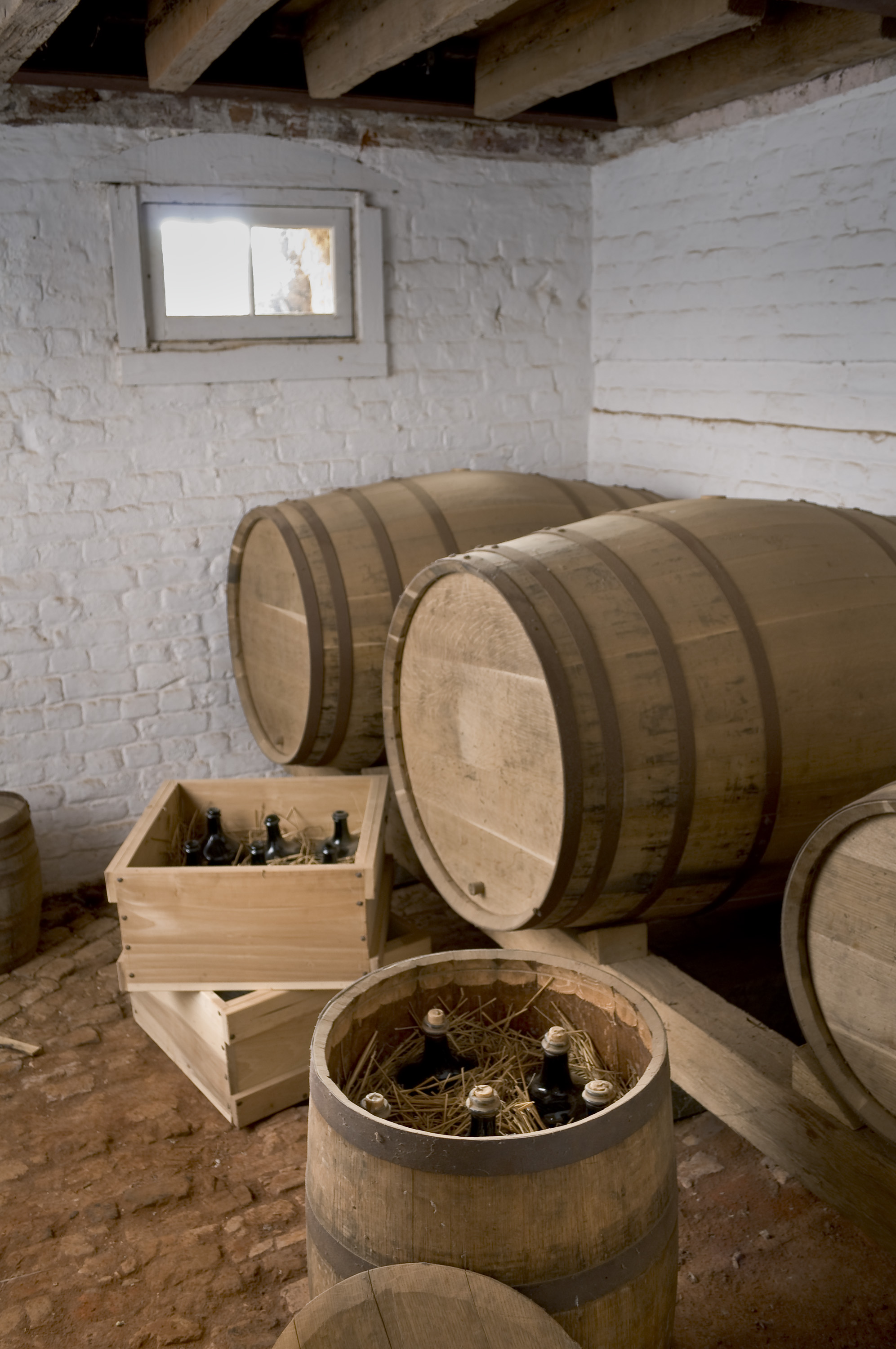 The restored beer cellar at Monticello

At Monticello, beer was a "table liquor" served during dinner, and Thomas Jefferson's earliest designs for his plantation included spaces for brewing and the storage of beer.

In the spring of 1812, while tensions grew between the United States and Great Britain, Jefferson was enjoying his retirement from public life at Monticello. Construction was under way on the brick garden pavilion, and Jefferson embarked on the scientific pursuit of brewing beer – the kind of experiment that he relished. Using malt purchased from his neighbor William Meriwether and hops bought locally, Jefferson was apparently successful in the first brewing attempt at Monticello since his wife had made beer some forty years earlier. On May 12 he instructed his overseer to "bottle the beer."[1]

For Jefferson and his countrymen, beer was ubiquitous. Rural households brewed small quantities in their kitchens for their own use, taverns sold beer to travelers, and in larger cities established breweries supplied the population with malt liquors. The inventory taken after Peter Jefferson's death listed The London and Country Brewer among his possessions, suggesting that beer may have been brewed at Shadwell in Jefferson's youth.[2] In the early years of their marriage, Jefferson's wife Martha brewed fifteen-gallon batches of small beer (which has a relatively low alcoholic content) nearly every two weeks.[3] Perhaps with a view toward expanding production, Jefferson's early plans for Monticello's offices (the rooms where household services were carried out) came to include both a brewing room and a beer cellar.

While traveling to and from Williamsburg or Philadelphia, Jefferson bought beer at taverns and once arrived in a city, he typically stocked up on beer by the gallon or cask. Among the "necessaries" for the house in Annapolis that Jefferson shared briefly with James Monroe in early 1784 were "2. ale glasses," while the President's House was furnished with four dozen beer goblets.[4] Beer and cider were the "table drinks" at Monticello. Reproductions of clay and glass bottles from fragments found at Monticello

The first hint that Jefferson considered brewing his own beer comes in a letter of friendly competition with George Gilmer, who lived at Pen Park in Albemarle. Jefferson wrote from Philadelphia in 1793 saying that he hoped to be home soon, "but it seems I must stay here a little longer in penance for my sins. This will give you the start in your manufactures of porter and maccaroni, in which however I shall certainly attempt to rival you."[5] Although Jefferson planted hops in his garden at Monticello in 1794, there is no indication that he then entered the brewing race.

In 1804 Jefferson's reputation as a man of science attracted the attention of a young author, Michael Krafft, who requested permission to dedicate his American Distiller to Jefferson "as a safeguard against its falling into the general wreck of oblivion."[6] Jefferson not only agreed to the dedication, but went on to endorse the subject of Krafft's study: "I see too with great satisfaction every example of bending science to the useful purposes of life. hitherto Chemistry has scarcely deigned to look to the occupations of domestic life. when she shall have made intelligible to the ordinary housholder the philosophy of making bread, butter, cheese, soap, beer, cyder, wine, vinegar &c. these daily comforts will keep us ever mindful of our obligations to her. the art of distilling which you propose to explain, besides it's houshold uses, is valuable to the agriculturalist, as it enables him to put his superfluous grain into a form which will bear long transportation to markets to which the raw material could never get."[7] Jefferson's correspondence with Krafft apparently excited his interest in brewing, and the next fall he purchased Michael Combrune's Theory and Practice of Brewing, which introduced the scientific approach of using a thermometer for the malting and brewing processes.[8]

On September 17, 1813, Jefferson and Joseph Miller, an Englishman stranded in Albemarle County during the War of 1812, came together for the purpose of brewing beer at Monticello. Jefferson wrote that day to his neighbor (and malt supplier) William Meriwether, "I lent you some time ago the London & Country brewer and Combrun’s book on the same subject. we are this day beginning, under the directions of Capt Millar, the business of brewing Malt liquors, and if these books are no longer useful to you I will thank you for them ...."[9] 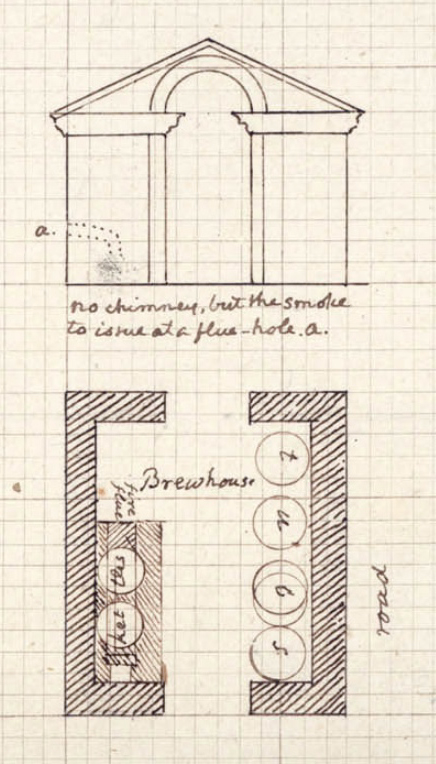 Jefferson''s s undated plan and elevation for a "Brewhouse"

And so under the direction of Miller, Jefferson became "a brewer for family use."[10] During the fall of 1813, Miller instructed the enslaved Peter Hemings, who was proficient in French cookery, in the art of malting and brewing. According to Jefferson, Hemings possessed "great intelligence and diligence both of which are necessary."[11] By the fall of 1814 there was a brewhouse at Monticello and Jefferson had begun malting his own grain instead of purchasing it from his neighbors. The location and design of the brewhouse remain a mystery; in an undated drawing, Jefferson shows a brewhouse in plan and elevation, but whether the one that was in use at Monticello was made to that design is unknown.[12]

Both the malting and brewing processes required precision timing and particular conditions. The best seasons for malting and brewing were spring and fall, and the Monticello brewery followed that schedule. Miller probably first instructed Peter Hemings in malting, showing him how to wet the grain to encourage germination. Though barley was typically used for malt, Jefferson first used wheat and then corn "as we do not raise barley."[13] Once germination had progressed to a certain point – which only an experienced malter could determine – the grain would be cooled, dried, and roasted. Depending on the heat of the roast the malt would be either dark or light, and would produce either dark beer (porter, stout), light beer (pale ale), or a combination thereof (brown ale, amber ale). Though Jefferson never left a description of the type of malt he produced, he and others referred to the Monticello beer as ale, suggesting that it might have been lighter. By 1820, Jefferson had a house for malting, perhaps like the one he described to James Madison as being dug into the "steep side of a hill, so as to need a roof only."[14] Once the malt had been ground, brewing needed to commence immediately. In the fall, Jefferson brewed three sixty-gallon casks of ale in succession. With each brew, the process began with mashing, or adding malt to hot water. Jefferson advocated using a bushel of malt for every eight or ten gallons of strong beer, noting that "public breweries" produce fifteen gallons from every bushel, which "makes their liquor meagre and often vapid."[15]

The liquid that resulted from mashing – wort – would be strained, and at Monticello three-quarters of a pound of hops were added for every bushel of malt. Finally, the hops were strained out of the wort and yeast was added, beginning the fermentation process.

Once the beer had been kegged, it needed to rest for at least two weeks in a cool, still place before being tapped. Jefferson preferred storing beer in bottles, and with each brewing season came the rush to order bottles and corks in time for production. Even when Miller was not in attendance at Monticello brewing sessions, Jefferson relied on him to choose the highest quality corks: "I shall want a supply of good corks to bottle our beer and cyder, as soon as they can be got. It is so provoking to lose good liquor by bad corks, and so uncertain to get them good from Richmond that I had rather trespass on your friendship to get them for me in Norfolk."[16]

The fall brewing of 1814, which presumably took place in the new brewhouse, was by all measures a success, and for the first time Peter Hemings experimented with malt made from corn. For several years Jefferson had tried to purchase a book by Joseph Coppinger (The American Brewer) that described a method of malting Indian corn. Coppinger contacted Jefferson for a subscription to the work and Jefferson replied: "I had noted the advertisement of your book in which the process of malting corn was promised & had engaged a bookseller to send it to me as soon as it should come out. we tried it here the last fall with perfect success, and I shall use it principally hereafter."[13]

Perhaps it was this corn beer that was served in silver tumblers (or "Jefferson cups") to two Bostonians who visited Monticello in February 1815. Francis Calley Gray recalled that he and his friend George Ticknor "passed the whole forenoon, which was rainy, in conversation with Mr. Jefferson and Mr. Randolph ... we were ushered back into the breakfast room to dinner .... The drinking cups were of silver marked G.W. to T.J., the table liquors were beer and cider and after dinner wine."[18]

As word spread of the brewing operations at Monticello, Jefferson's neighbors began requesting his ale recipe, or asking to have their servants trained in beer making at Monticello. Jefferson offered James Madison the opportunity to send someone to attend the fall brewing of 1820, and then return in the spring of 1821, "in order to perfect himself."[14]

Former governor James Barbour wrote requesting Jefferson's recipe: "Some years past I recollect to have drunk some ale at Monticello which I understood was of your own brewing. The manner of doing which you had obtained by a recipe from some intelligent Briton— ... you will oblige me much by furnishing me with a copy of the recipe as soon as your convenience will permit."[20]

"I have no reciept for brewing," Jefferson replied, "& I much doubt if the operations of malting & brewing could be succesfully performed from a reciept. if it could, Combrune’s book on the subject would teach the best processes: and perhaps might guide to ultimate success with the sacrifice of 2. or 3. trials .... we are now finishing our spring brewing. if you have a capable servt and he were to attend our fall brewing, so as to get an idea of the manual operation, Combrune's book with a little of your own attention in the beginning might qualify him."[15]