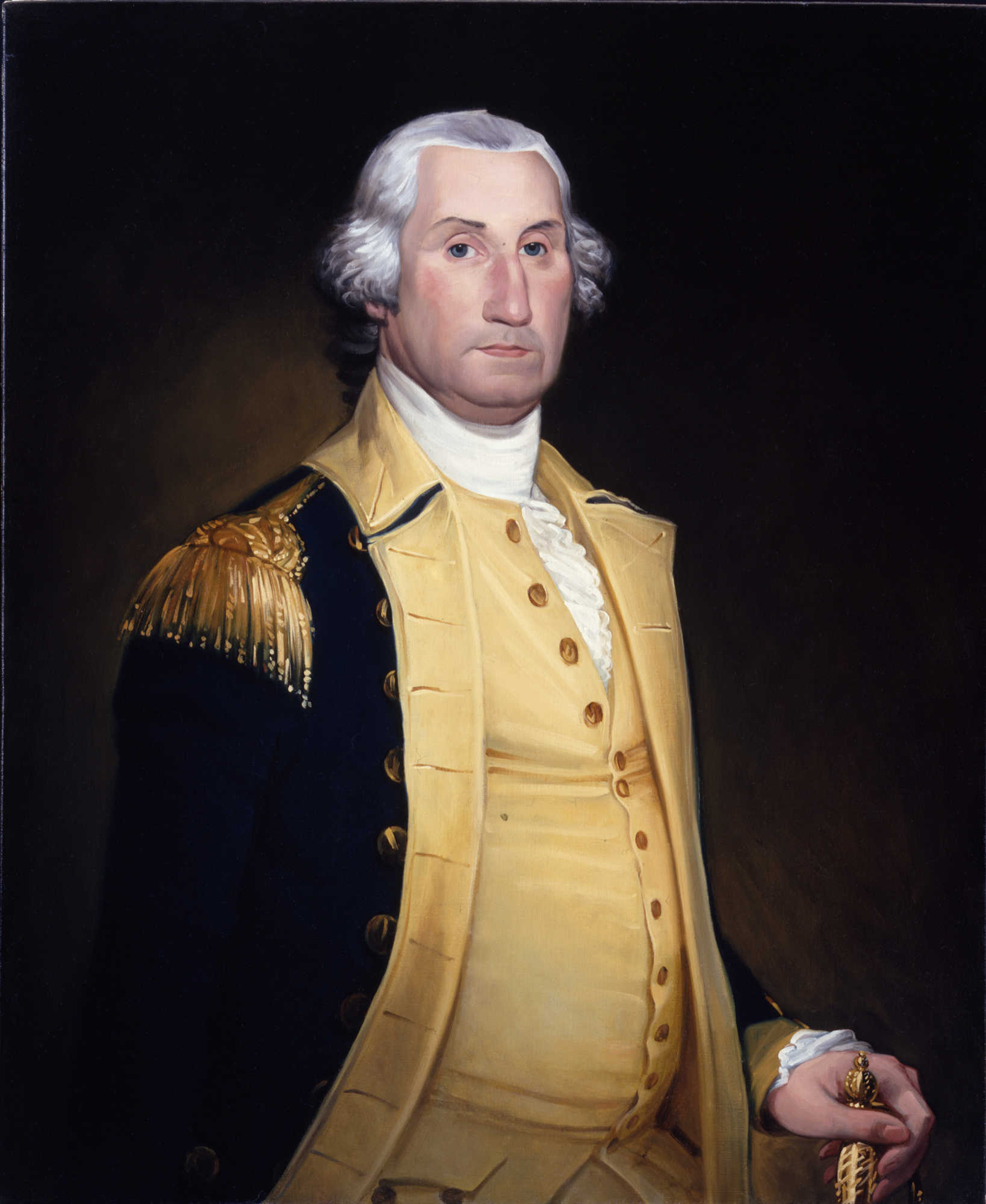 Provenance: Thomas Jefferson; by purchase to Israel Thorndike at the Harding Gallery sale in 1833; by gift to the Massachusetts Historical Society in 1835; copy produced for the Thomas Jefferson Foundation in 1998

Historical Notes: In Paris, Thomas Jefferson had two portraits of George Washington, a full-length by Charles Willson Peale and a half-length by Joseph Wright that he had commissioned while he was briefly in Philadelphia on his way to sail from Boston for France between May 14 and 28, 1784. The Peale portrait was sent to Jefferson in Paris in 1785 by Virginia Governor Benjamin Harrison for Jean-Antoine Houdon to use as a model for his sculpture for the Virginia legislature in 1784.[1] Jefferson thought that the Peale was more painterly — "better coloured, more softly painted, more flattering, but less like."[2] Before leaving Paris, Jefferson apparently presented the Peale to Madame de Tessé.[3] Wright's portrait of Washington became part of the collection at Monticello. Jefferson considered it

dryer, however, but more like. The painter has seised the gravest lineaments of the General's face, so that tho' it is a faithful likeness at certain times, it is an unfavourable one. It shews him as he was in the moments of his gravest difficulties.[4]

Although Jefferson thought that he was purchasing an original portrait, the likeness that he received was probably derived from Wright's first life study of General Washington, for which he sat in October 1783.[5] Jefferson apparently saw this portrait in Philadelphia in the possession of a fellow signer of the Declaration of Independence, Francis Hopkinson. On May 28, 1784, the day that Jefferson departed from Philadelphia, he noted, "Left with F. Hopkinson for Wright for drawg. Gl. Washington £17–10."[6]

Wright immediately began to work on the painting so that Hopkinson could ship it to Jefferson in Boston. Two days after Jefferson had left Philadelphia, Hopkinson reported:

Mr. Wright has made a most excellent Copy of the Generals Head; he is much pleased with it himself, and I think it rather more like than the Original. In Order to admit of it's being pack'd up at all he has been oblig'd to expose it all this Day in the Sun. The Consequence is that the Colours will sink in, as the Painters call it, that is, it will look dead and without Brilliancy or Gloss. This is the Case with all Pictures. All the Colours are brought out again by a Varnish. This Operation must be performed in France, as it can not be done till the Picture is thoroughly dry, for which you know there was not Time in the present Case.[7]

Many months later the picture was still unfinished. On July 6, 1785, Jefferson asked Hopkinson, "I also petitioned you to know whether I am yet at liberty to permit a copy to be taken of Genl. Washington's picture. Because till I am I cannot trust it in the hands of a painter to be finished."[8] In 1786, the portrait was finally finished by John Trumbull, who rendered the uniform in the correct colors but mistakenly used a European epaulet that was not worn in the United States.[9]

At Monticello, Washington's portrait by Wright hung in the upper tier in the Parlor. In a c. 1789 list of his paintings Jefferson wrote:

A Washington half length of full size or larger, an original taken by Wright (son of Mrs. Wright, famous for her works in wax), when Genl. Washington attended the meeting of the Cincinnati in Philadelphia May 1784. Passing then through that city on my way from Annapolis to Boston to embark for Europe I could only allow Wright time to finish the head and face and sketch the outlines of the body. These and the drapery were afterwards finished in Paris by Trumbull.[10]

Joseph Wright, who was born in Bordentown, New Jersey, was the son of Patience Wright, the prominent sculptor and secret American agent in Europe during the Revolution. After the death of her husband she settled in London in 1772 with her children, thus enabling Joseph to enroll at the Royal Academy in 1775 to study painting. Wright returned to America in 1782, where he launched a brief but successful career as a portrait painter, sculptor, and die-sinker. He died during the yellow fever epidemic in Philadelphia in 1793.