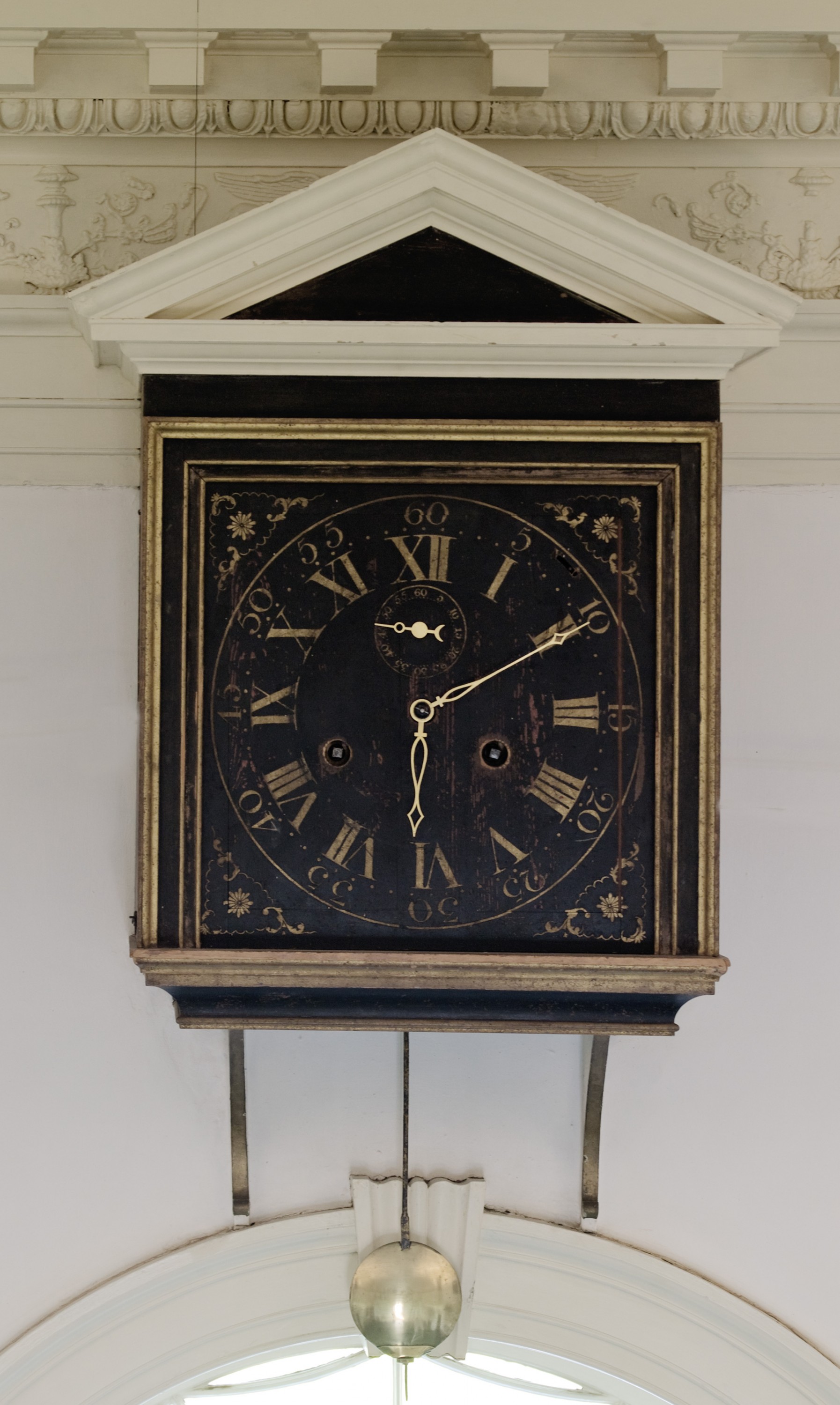 Historical Notes: With its dual faces and hour-striking gong, the Great Clock at Monticello served the residents of the house as well as the workers in the field. Its design evinces Jefferson's desire for order, which he exerted in equal but different ways over his family and his slaves. It also reveals his love of innovation and his ability to modify the traditional to suit his needs. It was as much a topic of conversation in Jefferson's time as it remains today.

The seven-day clock is mounted in the Entrance Hall and has a second face on the east front of the house. Jefferson's instructions for the clock's construction explain his intent for the exterior face, which has only an hour hand:

a toothed wheel of 2. I. [inches] on the back-end of the axis of the hour hand ... may turn an hour hand on the reverse face of the wall on a wooden hour plate of 12. I. radius. There need be no minute hand, as the hour figures will be 6. I. apart. But the interspace should be divided into quarters and 5. minute marks.[1]

The Entrance Hall face indicates the hours and minutes on a larger dial, and the seconds on a smaller one. The clock is powered by two sets of cannon-ball-like weights (eighteen pounds each), which drive its ticking and the striking of a gong on the roof. The weights are strung on ropes and descend in the corners of the room on either side of the clock, through holes in the floor to the cellar below. Jefferson placed labels next to the path of the ticking (or running) weights to indicate the days of the week, which he also did on the inside case of his astronomical clock. The clock was wound every Sunday with a cranklike key, and a folding ladder was made in the Monticello joinery for that task.

Jefferson began planning the Great Clock in 1792, while in Philadelphia. He wrote to Henry Remsen, chief clerk of the foreign desk of the department of state, to inquire about Chinese gongs for the clock:

The Chinese have a thing made of a kind of bell metal, which they call a Gong, and is used as a bell at the gates of large houses &c. ... I wish for one to serve as the bell to a clock, which might be heard all over my farm.[2]

Benjamin Franklin's use of a gong in place of a bell, may have inspired Jefferson.[3]

By the beginning of 1793, the clock had been completed to Jefferson's specifications in Philadelphia by Peter Spruck, an apprentice to Robert Leslie, whose workmanship was less than satisfactory. Jefferson wrote to Leslie in December 1793:

My large clock could not be made to go by Spurck. I ascribed it to the bungling manner in which he had made it. I was obliged to let him make the striking movement anew on the common plan, after which it went pretty well ....[4]

The clock was probably installed in Jefferson's Philadelphia house at Gray's Ferry before it was transported to Virginia.[5] It was brought to Monticello when Jefferson returned there in 1794, and he soon solicited clockworkers to undertake its repair.[6] At this same time he finally procured a gong for use with the clock.[7]

It was not until 1804, while president, that Jefferson ordered the weights for the clock from the Foxall Foundry in Washington, D.C.[8] In January of that year, Jefferson was first confronted with the fact that the length of the descent of the clock weights, which he planned to have enclosed in a box, was greater than the height of the Entrance Hall. In a letter to James Dinsmore Jefferson arrived at the notable solution:

I do not approve of cutting the wall, not even the cellar wall, to make a space for the descent of the clock weights; but would have them advanced into the room so as to descend clear even of the cellar wall. should the box in this case encroach too much on the window, we may avoid the eye sore by leaving them unboxed, to descend naked till they get to the floor whence they may enter a square hole & go on to the cellar floor.[9]

The Great Clock has never been removed from Monticello since its installation in 1804-1805.

In Jefferson's specifications for the Great Clock, he calls for two wheels which will "turn an hour hand on the reverse face of the wall on a wooden hour plate of 12. I. [inch] radius." He goes on to say, "There need be no minute hand, as the hour figures will be 6. I. apart. But the interspace should be divided into quarters and 5. minute marks. The fore and back hour-plates will not be concentric."[10]

Thus the lack of a minute-hand is not a clockmaker's mistake but part of Jefferson's design. Because of the size of the face and the markings between the hour figures, the hour-hand itself would do the work of the minute-hand. The figure IIII is used on the clockface rather than IV. There are several reasons behind this. First, it provides a better visual balance on the clock face. Second, IIII is actually how the Romans wrote 4. The practice of using the subtractive forms of IV for 4 and IX for 9, etc. did not develop until about 1300 A.D.

1795 May 23. (Jefferson to Archibald Stuart). "I think you have a watch and clock mender in Staunton. Does he ever pass this way? If he does, I should be glad he would call upon me to do a little work. I have a large clock for the top of my house which needs to be cleaned only and fixed up."[13]

1853. (Benson J. Lossing). "Over the entrance door from the portico, is a large clock, placed there by Jefferson, which by an index upon the wall, indicated the days of the week. The weight which propels it is composed of nine eighteen pound cannon balls."[14]

1872. (David M. R. Culbreth). "... over the front door built into the wall is a good-sized clock, which had to be wound standing upon a ladder—this latter being in normal position and claimed to have been made by Mr. Jefferson himself; the hands stand at 7.34 o'ck."[15]

1900. (Peter Fossett). "... As I entered the grand ballroom, there, above the door at the east, still stood the wonderful big clock, double-faced, with cannon balls of the Revolution for its weight. It marks the day of the week as well as the day time and its ponderous voice can be heard six miles away in the valley below. This Mr. Jefferson designed himself. And there, too, was the ladder he made—a folding one—to reach the lofty clock, and the big iron key he used to wind it with."[16]