James Hubbard (b. 1783), known to Thomas Jefferson as Jame or Jamey, was the son of James Hubbard (b. 1743), an enslaved foreman of farm labor at Jefferson's Poplar Forest plantation, and his wife, Cate (b. 1747). In 1794, Jefferson had the eleven-year-old Hubbard brought to Monticello to work in the new Mulberry Row nailery. He lived with Phill the wagoner and his wife, Molly (whose last names are unkown), in their log dwelling near the top of the mountain; his younger brother Philip Hubbard ("Phill") joined him there two years later. As an adult, Hubbard made two attempts to escape from slavery at Monticello.

Young Hubbard, whose name Jefferson often wrote as "Jame," performed poorly at first but was before long one of the most productive nailmakers. According to Jefferson's nail book, Hubbard made seven pounds of eight-penny nails in one day in April 1796, which means that he swung his hammer more than twenty thousand times.[1] He also learned how to produce the charcoal needed for the forges of the nailery. In 1802 Jefferson paid him a small premium for burning charcoal efficiently.[2] This operation required chopping thirty cords of wood and round-the-clock monitoring of the kiln to maintain an even temperature.

In the summer of 1805, Hubbard set in motion his plans to escape. With money he had saved, he purchased forged free papers and new clothing and set forth on foot to Washington. After all his careful preparations, it must have been a bitter blow to be apprehended just outside the federal city. Unable to read or write, he had put his trust in the free papers, which were poorly composed and easily recognized as a forgery.[3]

Six years later, at age twenty-seven, Hubbard escaped again, this time armed with genuine free papers, acquired from a local free black man. At this point, Hubbard had been hammering iron or swinging an axe for sixteen years. He had grown strong and learned persistence over a hot forge, and he clearly had had his mind on freedom for a long time. A runaway advertisement described him as "about six feet high, stout limbs and strong made, of daring demeanor, bold and harsh features, dark complexion.[4]

Hubbard managed to elude pursuit for over a year, living only about seventy miles away in Lexington, Virginia. Jefferson had, in the meantime, sold Hubbard to Reuben Perry, a hired carpenter, for $500 if he was recovered, $300 if not.[5] When word of Hubbard's location finally came, Jefferson spent $70 to bring him back to Monticello, where he had him "severely flogged in the presence of his old companions, and committed to jail." Jefferson strongly advised Perry to sell the runaway out of the state, expressing the view that "the course he has been in, and all circumstances convince me he will never again serve any man as a slave. The moment he is out of jail and his irons off he will be off himself."[6] No further record of James Hubbard has been found.

- Compiled from Lucia Stanton, "Those Who Labor for My Happiness": Slavery at Thomas Jefferson's Monticello (Charlottesville: University of Virginia Press, 2012). 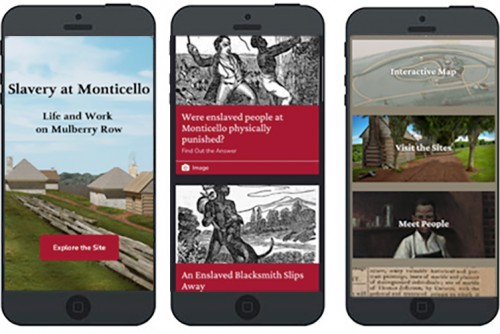 Available in Our Online Store: Those Who Labor for My Happiness