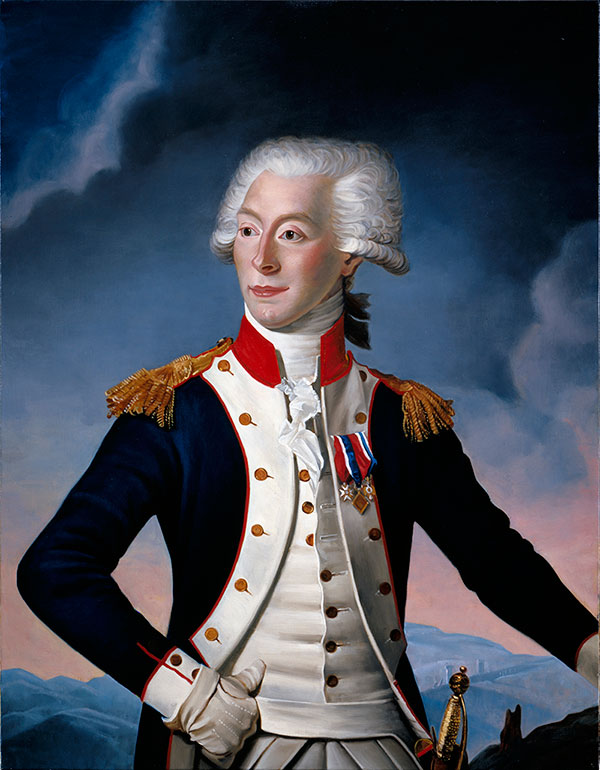 Provenance: Thomas Jefferson; by purchase to Mrs. John W. Davis at the Harding Gallery sale in 1833; by gift to the Massachusetts Historical Society in 1835; copy produced for the Thomas Jefferson Foundation

Historical Notes: As Jefferson was getting settled in New York as secretary of state in 1790, he wrote William Short, his secretary in Paris:

My pictures of American worthies will be absolutely incomplete till I get the M. de la fayette's. Tell him this, and that he must permit you to have it drawn for me. I do not like Madme. le Brun's fan colouring, and of all possible occasions it would be worst applied to a hero. This therefore is an additional reason to that of her extravagant price. I must leave it to you to find a good hand clear of both objections. It should be of the size of Genl. Washington's half length picture in the Dining room.[1]

Joseph Boze began work on the portrait by November 7. Short reported to Jefferson: "I have advice also that the Mis. de la fayette's picture is finished and I have directed it to be sent also to Havre."[2] The cost was "16. guineas for the painting, 3½ for the gilt frame."[3]

Short informed Jefferson that he had selected Joseph Boze, "who I think has taken by far the best likenesses of the Marquis."[3] Boze had completed an oval miniature of Martha Jefferson before her return to America in 1789. Having been a portrait painter at the court of Louis XVI, he was imprisoned during the Revolution and later released.

Correspondence between Short and Jefferson suggests that the portrait of Lafayette may not have been painted from life. Short wrote Jefferson:

It has been impossible as yet to get the Marquis de la fayette to set for his picture. He always says he will do it, but never keeps his word and indeed he has not time—not even one moment to spare. Still if it is possible it shall be done.[5]

Boze depicted Lafayette in the military uniform of the Parisian National Guard wearing the medals of the Society of the Cincinnati, the Vainqueurs de la Bastille, and the Cross of Saint Louis.

At Monticello Jefferson placed this portrait of his dear friend in the top tier of the Parlor between Sir Walter Raleigh and James Madison. Lafayette undoubtedly saw it there in 1824 when he was reunited with Jefferson during his triumphant farewell tour of the United States. At a speech at a dinner honoring Lafayette in Charlottesville, Jefferson said:

[H]is deeds in the war of [independence] you have heard and read. ... when I was stationed in his country for the purpose of cementing it's friendship with ours and of advancing our mutual interests, this friend of both was my most zealous and powerful auxiliary and advocate. ... honor him then as our benefactor in peace as well as in war.[6]