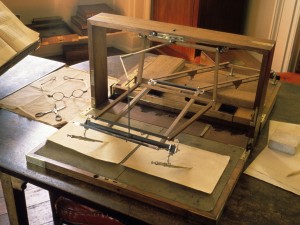 Polygraph (No. 57) was one of several owned by Thomas Jefferson. Courtesy of the University of Virginia.

Historical Notes: Marked "Hawkins & Peale's Patent Polygraph No. 57," this machine was used by Jefferson from 1806 until his death. Jefferson first acquired the letter-copying device he called "the finest invention of the present age" in March of 1804.[1] Invented and named by Englishman John Isaac Hawkins, the polygraph used the principles of the pantograph, a draftsman's tool for reducing and enlarging drawings.[2] The writer's hand moves one pen whose action is duplicated by the second one, producing a copy strikingly like the original.

Before he returned to England in 1803, Hawkins assigned his American patent rights to Charles Willson Peale, who developed and marketed the invention.[3] Jefferson was one of his most eager clients, purchasing one for the President's House and one for Monticello. He soon exchanged these machines for new ones, as Peale continued to perfect the design — often according to Jefferson's suggestions. By 1809 Jefferson wrote that "the use of the polygraph has spoiled me for the old copying press the copies of which are hardly ever legible . . . . I could not, now therefore, live without the Polygraph."[4]

A second Jefferson polygraph, made in England for Hawkins, survives at the American Philosophical Society. It was given by Jefferson's grandson-in-law and last secretary, Nicholas P. Trist.