View of the West Front of Monticello and Garden (Painting) 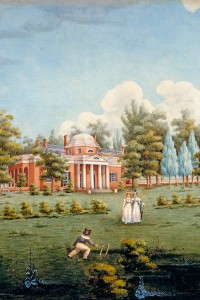 View of West Front of Monticello and Garden by Jane Braddick Peticolas.

Monticello was only rarely depicted in Jefferson's lifetime. Consequently, this watercolor and its companion, View from Monticello Looking Toward Charlottesville, have become important documents recording the appearance of Monticello and its surrounding landscape. According to Ellen Randolph Coolidge's grandson, these watercolors of Monticello were painted for Mrs. Coolidge by her friend, the Richmond artist, Jane Braddick Peticolas.

The View of the West Front of Monticello shows Monticello with three of the Randolph children. George Wythe, the youngest boy, rolls a hoop, and two of his sisters, Mary and Cornelia, stand in the middle ground. An unidentified young man sits at the left sketching the scene. The View from Monticello Looking Toward Charlottesville looks toward the small town of Charlottesville and a clearing showing the construction of the University of Virginia.

The Randolph daughters, who frequently visited cousins in Richmond, knew Jane Braddick when she ran a school in Richmond before her marriage to Peticolas. Virginia Randolph wrote:

I heard with great surprise that Miss Braddick intended to break up her school and marry Mr. Petticola -- hitherto I have believed her too ambitious if not too prudent to make this match, but sister Ellen who knew her better expected it to take place. I feel interested in her fate, which will not at least be as forlorn as it has been and I hope she may be happy.[2]

Although very little of her work is known, Mrs. Peticolas was chiefly recognized as a copyist of portraits. Her best known work is a copy of Cephas Thompson's portrait of John Marshall.