A Dynamic Duo: Jefferson and Madison 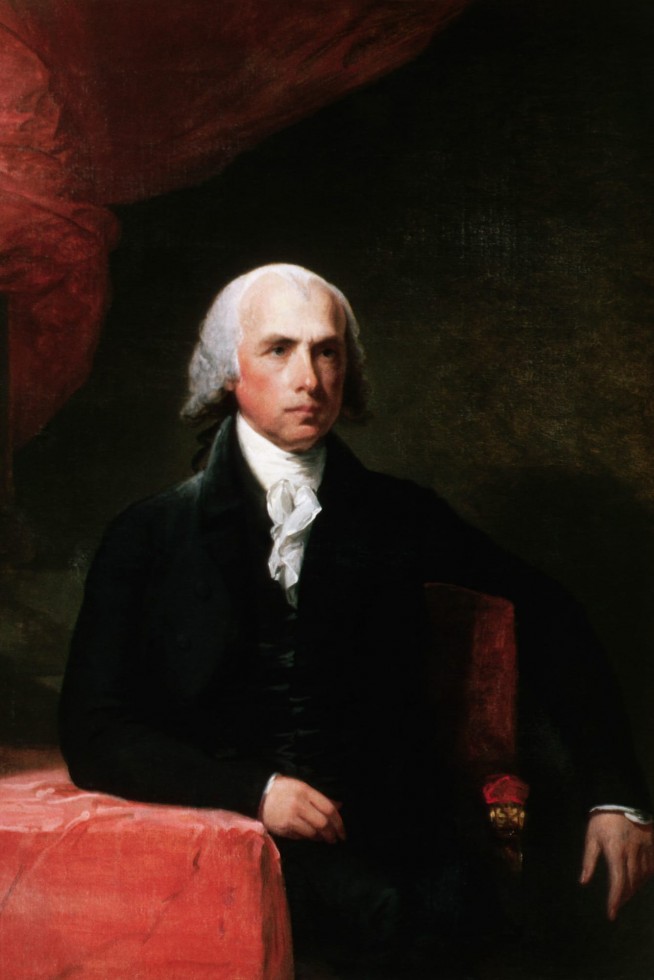 Thomas Jefferson had an enemy in Alexander Hamilton, a frenemy in John Adams, and his BFF in James Madison. Jefferson and Madison formed a political partnership and personal friendship that made them the dynamic duo of the Founding Fathers.

From their first meeting in the fall of 1776, Jefferson and Madison brought out the best in each other. Physically, they couldn’t have been more different. Jefferson was six feet two and a half inches tall, lean in build, red haired and “straight as a gun barrel.” Madison was barely five feet and five inches, barely a hundred pounds, blue eyed, balding and “but a withered little apple-john.”

Intellectually, they complemented each other to perfection. Jefferson, quick witted and ever curious, was the passionate visionary. Madison, painfully shy and seeing all sides of every issue, was the skeptical realist. Both were known for fascinating people in small groups with their knowledge, dry senses of humor, and enthusiasm for liberty, the arts, sciences and agriculture.

Jefferson and Madison began their political partnership during the fight for religious freedom in Virginia. They felt religious liberty was a necessity, rejecting Britain’s policy of an official religion that could trample on the rights of people of other faiths. Passage of The Statute of Virginia for Religious Freedom, written by Jefferson and introduced for consideration in 1779, became Madison’s obsession for years to come. In January of 1786, Madison’s persistence paid off with the passage of the Statue that Jefferson included among his three greatest achievements. 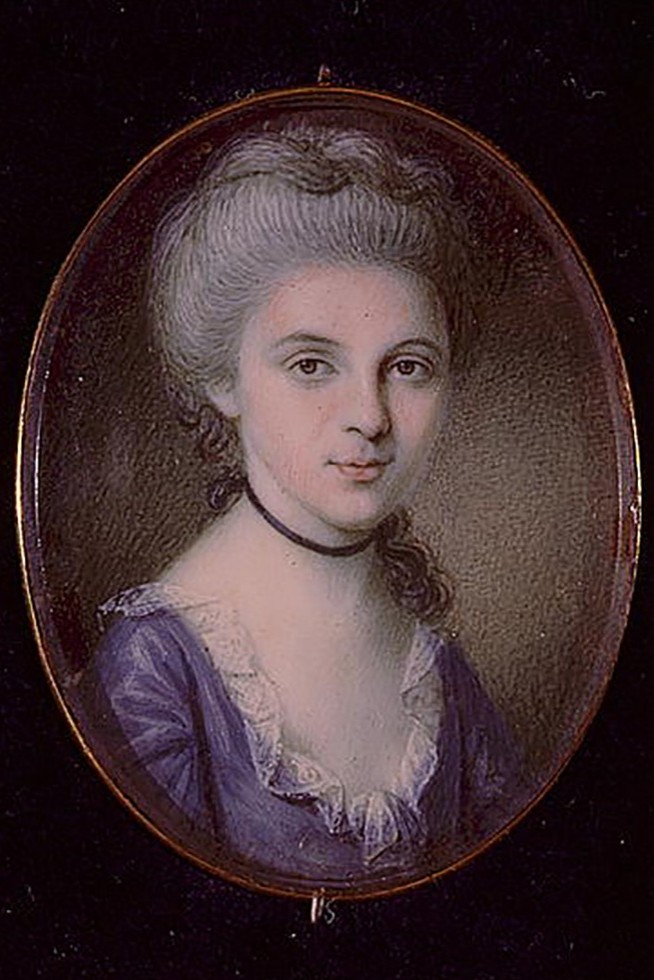 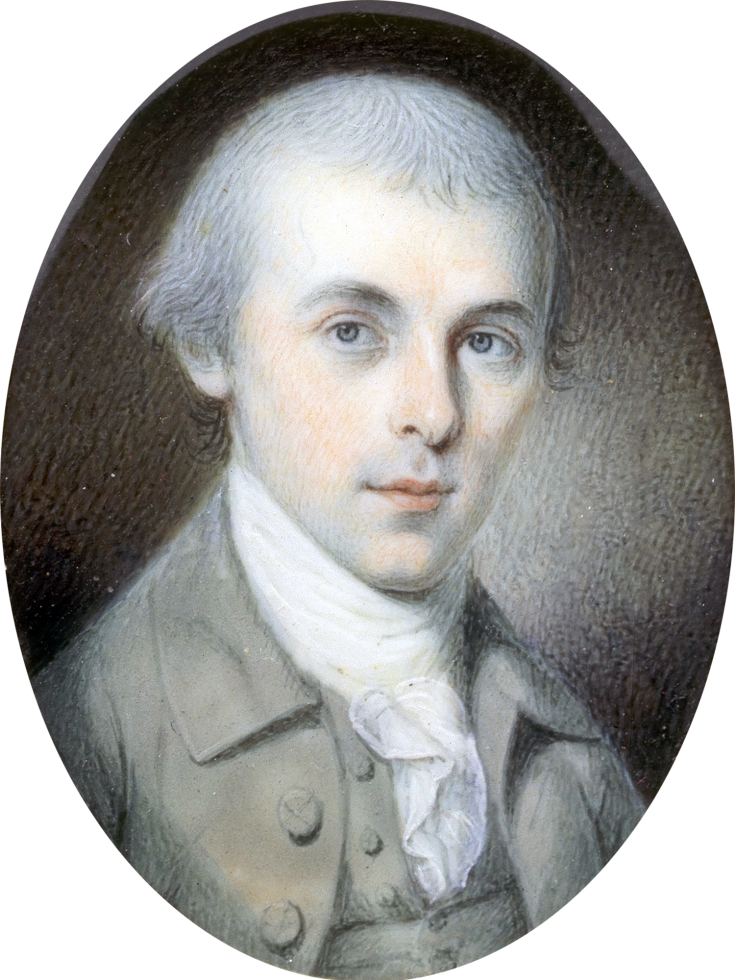 In 1783, Jefferson and Madison served in the Confederation Congress in Philadelphia, where Madison fell in love with Kitty Floyd, teenage daughter of William Floyd of New York. The couple exchanged miniature portraits of each other and Jefferson, playing matchmaker, urged Madison to propose. After the Floyd family returned to New York, Kitty Floyd sent Madison a letter ending their courtship. Jefferson consoled his lovelorn friend that happiness would come again. A decade later, Madison married Dolley Payne Todd, later to become one of the most notable First Ladies. Late in life, reviewing letters he and Jefferson exchanged about Kitty Floyd, Madison inked out every mention of the name of his first love.

The Father (and the Godfather?) of the Constitution and the Bill of Rights

The Bill of Rights (as proposed)

In the 1780s, with the states becoming increasingly independent from a weak national government, Jefferson and Madison recognized the survival of the United States required a Federal Constitution. As Minister to France, Jefferson did not attend the Constitutional Convention, but sent Madison books detailing past attempts to create a federal republic and numerous letters commenting on the draft Constitution and the need for a Bill of Rights. Aided from afar, Madison’s Constitution created a new governing framework that linked itself to the inalienable rights of Jefferson’s Declaration of Independence through The Bill of Rights.

With the Constitution ratified, President Washington relied on Congressman Madison as an advisor to form his Cabinet, selecting Alexander Hamilton as Secretary of the Treasury and Jefferson as Secretary of State. Early hopes for a government free of division disappeared as the nation split politically. Hamilton, leader of the Federalist Party, advocated commerce and expansive government while Jefferson and Madison, leading the Anti-Administration faction, advocated agriculture and limited government. In 1791, Jefferson and Madison embarked on a trip through New England for the public purpose of relaxation and botanizing. Privately, they met with Anti-Administration leaders and convinced newspaperman Philp Freneau to establish the National Gazette to counter Hamilton’s Gazette of the United States. When Jefferson resigned as Secretary of State and returned to Monticello, he and Madison created the Democratic-Republican Party, waging battle in the press and ballot box to gain political power.

The Making of a Vice President

Madison shrewdly planned Jefferson’s political comeback in the 1796 Presidential election, the first to field candidates from opposing parties with Federalists John Adams and Charles Pickney running against Democratic-Republicans Jefferson and Aaron Burr. Prior to the 12th Amendment, Electors cast two votes for President, and the candidate with the second highest number of votes became Vice President, raising the possibility of a split ticket. Taking the long view, Madison proposed Jefferson content himself as Vice President. When Adams became President and Jefferson Vice President, Jefferson heeded Madison’s advice that he make no reconciliation with Adams and maintain his silent opposition to Federalist policies. Throughout their political partnership, Madison was Jefferson’s sounding board, restraining his passions and channeling his energy to achieve their goals. 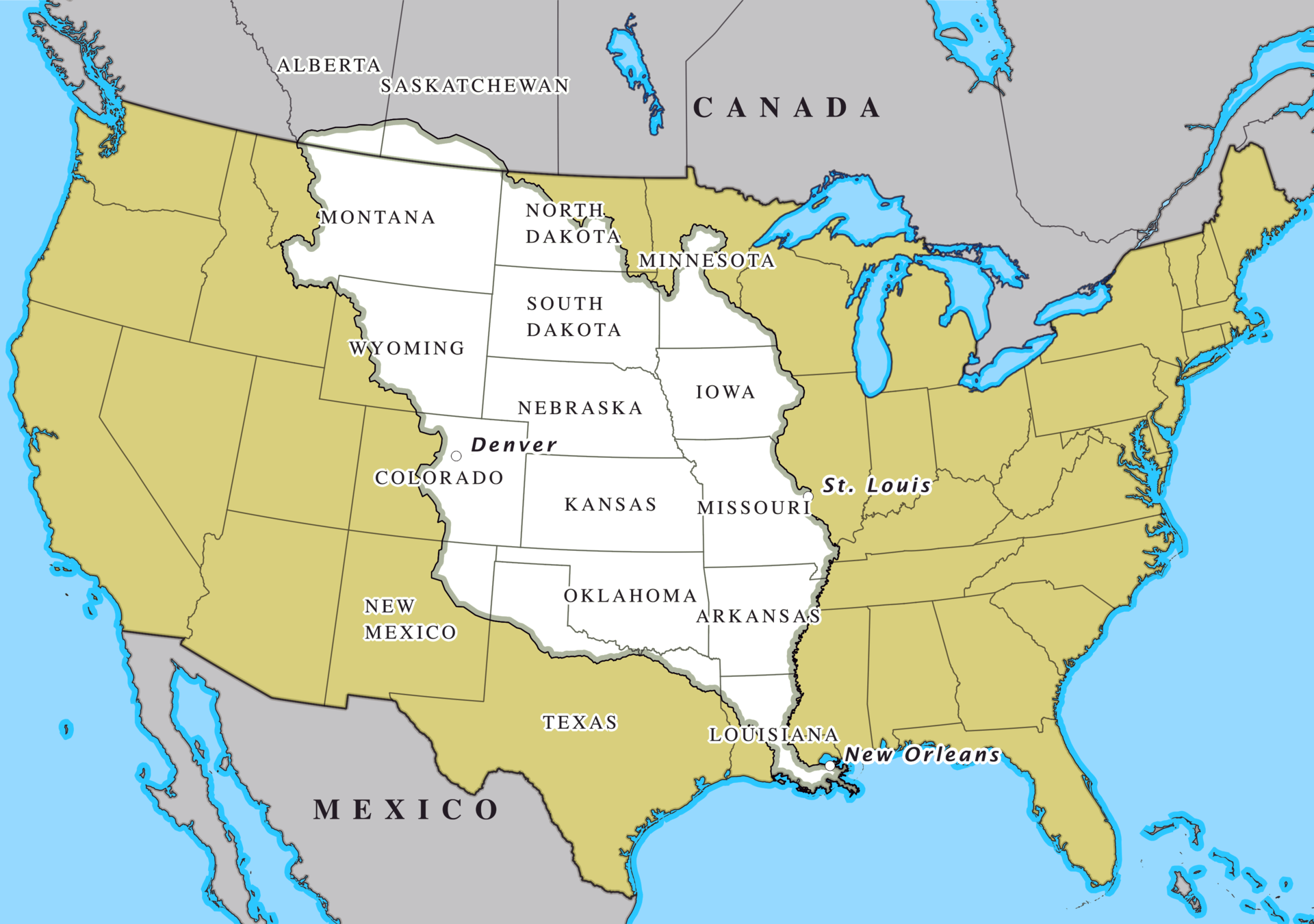 Map of the Louisiana Purchase

The election of 1800, a rematch of 1796, was a bitter contest so close that a tie in the Electoral College threw the decision to the House of Representatives where Jefferson was elected President on the 36th ballot. Selecting Madison as Secretary of State and Albert Gallatin as Secretary of the Treasury, Jefferson’s Cabinet set about undoing Federalism, acquiring territory and maintaining peace abroad. The President's House became the center of Washington society with Dolley Madison ably assisting Jefferson in entertaining his visitors.

With Madison by his side, Jefferson’s First Administration saw a series of triumphs, including defeating the Barbary Pirates, embarking on internal improvements, reducing the debt, downsizing the U.S. military and, most notably, acquiring the Louisiana Territory in 1803 despite his firm belief that doing so was unconstitutional. Madison and Gallatin convinced Jefferson to maintain public silence about his concerns, and Madison steered passage of the Louisiana Treaty through the Senate by an overwhelming majority. Often, when Jefferson saw the Constitution limiting his power, Madison convinced Jefferson the Constitution was flexible, allowing for the full exercise of his power, so long as no one objected.

Jefferson’s second term began with ambitious plans thwarted by deteriorating relations with Britain’s impressment of American seamen to serve in Royal Navy ships in the Napoleonic Wars. Overestimating America’s economic influence, Madison and Jefferson imposed a series of trade embargoes to avoid war and end impressment. The result was an economic and political disaster and Jefferson left office complaining the Presidency was “a splendid misery” before handing the reins of government to Madison. 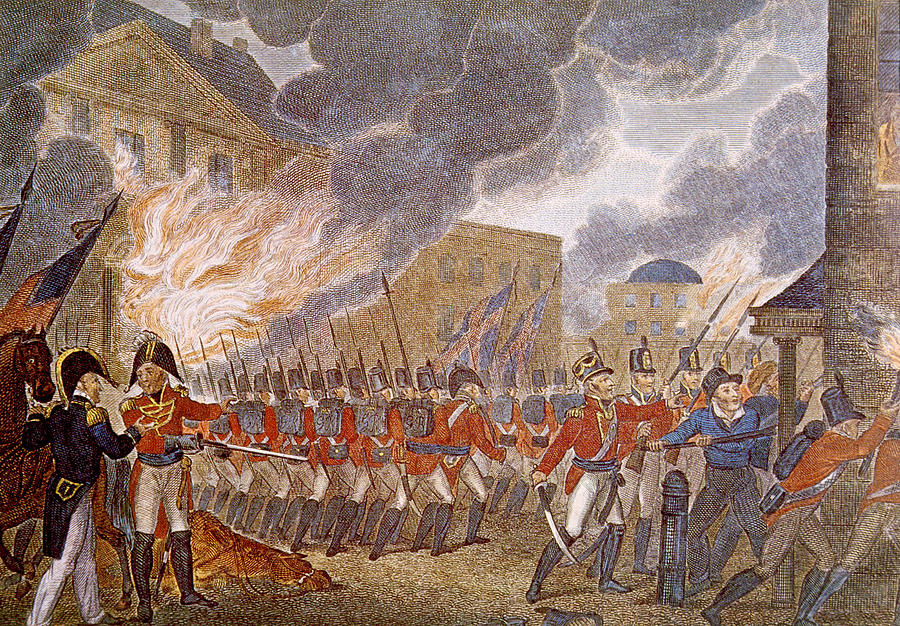 Capture and Burning of Washington, DC. Illustration from The History of England, from the Earliest Periods, Volume 1 by Paul M. Rapin de Thoyra, 1816.

In his first term, Madison was preoccupied with trade wars and attacks on American shipping by the British and the French that threatened to tear the country apart. Frustrated by his failure to act, “War Hawks” stirred national sentiment to capture Canada as a bargaining chip and Madison reluctantly asked Congress to declare war, expecting an easy victory, which Jefferson declared to be “a mere matter of marching.” Reelected as a wartime President, “Mr. Madison’s war” began as a series of defeats for the poorly equipped and badly lead American forces. Retired at Monticello, Jefferson avoided discussion of war and focused on mutual interests in agriculture, science and neighborhood gossip. 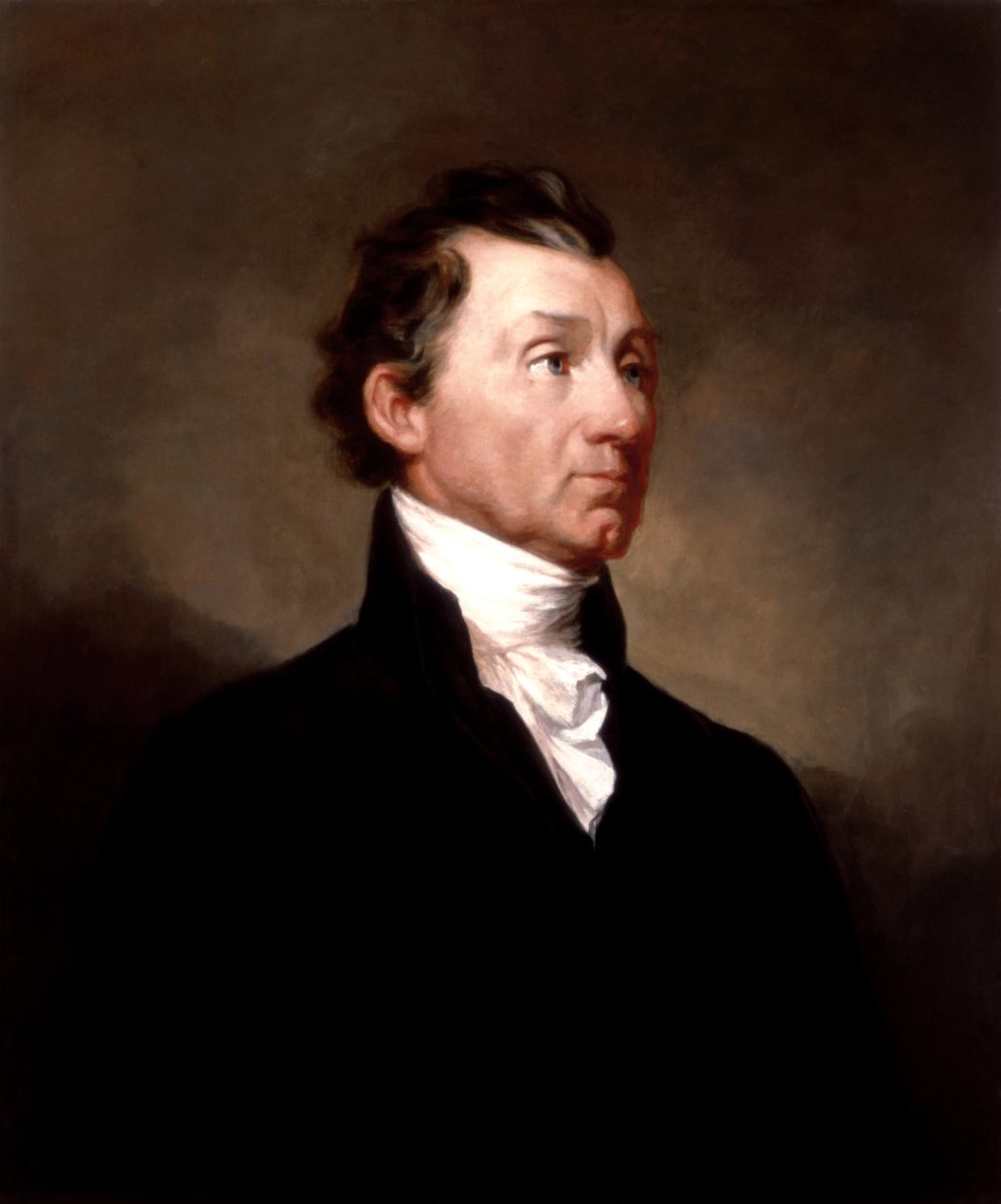 Portrait of James Monroe was painted by Samuel F. B. Morse circa 1819. Courtesy the White House Historical Association

Madison needed an advisor to fill the role he once filled for Jefferson and turned to friend and political rival James Monroe, appointing him both Secretary of State and Secretary of War. In the field, William Henry Harrison and Andrew Jackson won victories, but the British remained dominant, burning Washington, D.C. Exhausted after a decade of war in Europe, the British public demanded an end to the war in America. In 1815, Jackson’s victory at New Orleans and the Treaty of Ghent ended the conflict, creating the public sentiment that America had won its second war of Independence.

At the end of his Presidency, Madison enacted plans to restore credit, begin ambitious programs for internal improvements, spur American manufacturing and modernize the Army and Navy. Although detractors claimed his plan “out-Hamilton’s Alexander Hamilton,” Madison left office on a wave of popularity, leaving behind an “era of good feelings” for President Monroe.

“A Constant Source of Happiness”

In retirement, Jefferson and Madison renewed their friendship through frequent visits, formed the Albemarle Agricultural Society, recalled their careers for historians and unsuccessfully dealt with mounting debt. Both men devoted themselves to founding the University of Virginia as an institution dedicated to advancing the idea that the future could be improved through knowledge and a competition of ideas.

In a farewell letter, Jefferson observed Madison’s friendship was a “constant source of happiness” and remarked of his compatriot of 50 years: “To myself you have been a constant pillar of support through life. Take care of me when dead and be assured I will leave you with my last affections.”  Jefferson died July 4th, 1826, content that Madison would carry on as steward of the University.

After Jefferson’s death, Madison served as Rector of The University of Virginia and embarked on an obsessive project of “straightening out” his correspondence, often rewriting entire documents to cast himself in a more favorable light. Madison died June 28th, 1836. In his final letter, written the evening prior to his death to Jefferson’s first biographer, George Tucker, Madison remarked that he and Jefferson shared a friendship and political partnership with a zeal to provide for the “permanent liberty and happiness of the United States.”