This Liberty Coronet One Cent piece was discovered at Site 6, a field quarter site once home to enslaved field laborers at Monticello. Click to enlarge.

Archaeology is an historical discipline whose goals are to advance our understanding of what happened in the past and why. But unlike the documents on which historians rely -- think Jefferson's letters -- archaeological deposits do not come with dates.  In archaeology, we have to do work for the dates that are essential for turning artifacts into history.

During our preservation process, the coin was conserved in order to prevent any further deterioration of the copper alloy surface. The words on the back face, woman’s silhouette, and stars encircling the front face of the coin are now more easily visible. Click to enlarge.

This summer Monticello archaeologists working at Site 6, a long forgotten domestic site that was once home to enslaved field laborers, got an exciting boost in their quest to date the site's occupation. Students enrolled on the Monticello-UVA Archaeological Field School found a coin in an excavation unit where a house once stood.

The coin is badly corroded. But we see the stamped words “ONE CENT”, surrounded by a leafy garland and “UNITED STATES OF AMERICA.” The other face shows the profile of a woman with a neo-Classical hairdo, wearing a coronet. The outside edge appears to be encircled with stars or dots. Because of corrosion, no date is visible. Based on the visible designs, this coin is almost certainly a Coronet Liberty Head large cent that was minted between 1816 and 1839. The coronet would have been inscribed "LIBERTY". 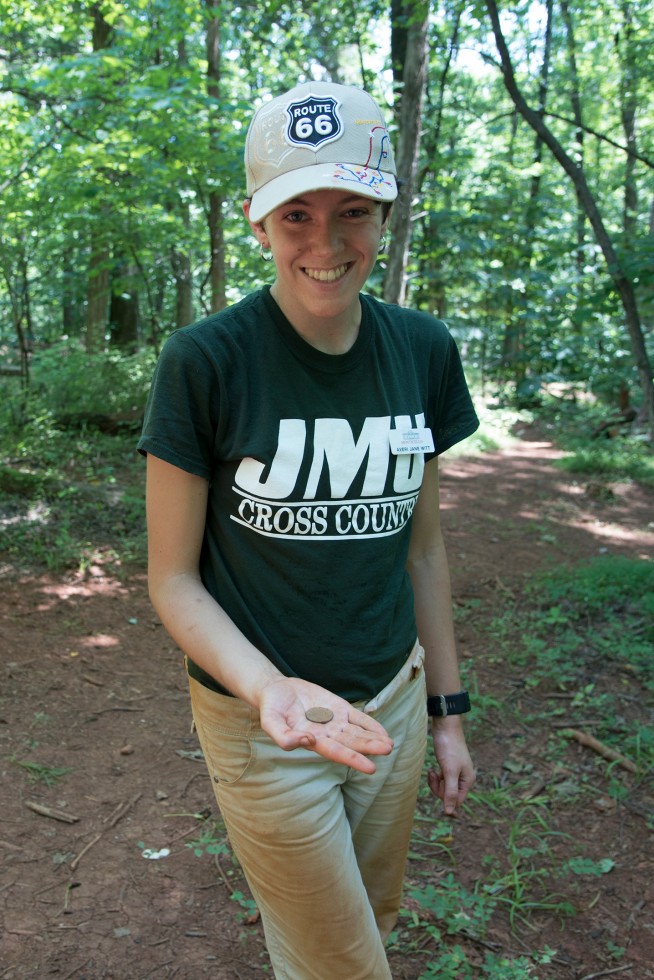 Monticello-UVA Field School student Averi Witt shows off the exciting find of the copper alloy coin during summer fieldwork. Produced between 1816-1839, this coin provides further confirmation that Site 6 was occupied during the first three decades of the nineteenth century.

The new find is important because it helps us objectively evaluate our previous hypotheses about the occupation dates of the site, based on the kind of ceramics we have found. Documentary research allows us to estimate the manufacturing date ranges of different ceramic types. For example, Creamware was popular in last quarter of the eighteenth century, while Pearlware was fashionable in the first quarter of the nineteenth century.  We had previously used statistical models to combine manufacturing-date estimates with data from our excavations on ware-type percentages to estimate that Site 6 was occupied between about 1800 and 1830.  The coin offers gratifying confirmation.

The coin is important for a second reason. Our research prior to this summer has allowed us to identify two, separate households at the site, one in the north and one in the south. Multiple independent lines of archaeological evidence indicate that enslaved members of the northern household were able to rely on their continued residence at the site from one year to the next. Residential stability made investments in gardening a good bet: there was a reasonable probability that household members would be around to harvest the rewards, which they could use to enhance their own diets and sell to other households, including Jefferson's.  Access to cash made it possible to acquire a variety of amenities, including more stylish ceramic table wares and glazed windows. We suspect the southern household lacked these kinds of amenities because they faced more uncertain futures that made investments with delayed payoffs too risky.  Finding the Liberty Coronet penny adjacent to the northern household offers additional support for this hypothesis.  For more on social inequality see  the Winter 2018 Monticello magazine article on Site 6.

Writing over a half century ago, the distinguished and …eccentric…  English archaeologist Sir Mortimer summed up archaeologist's fraught relationship with dates like this: …mere dates are still of primary and ultimate and unrelenting importance. And by dates I mean not simply those nebulous phases and sequences, those date-substitutes, with which  archaeologists often try to bluff us. I mean time in hard figures. I mean Bradshaw. "Bradshaw" here refers to the authoritative timetable for British railways, published between 1839—the same year our Liberty Coronet penny went out of production—and 1961. Our penny is not quite Bradshaw. But it helps get us closer.