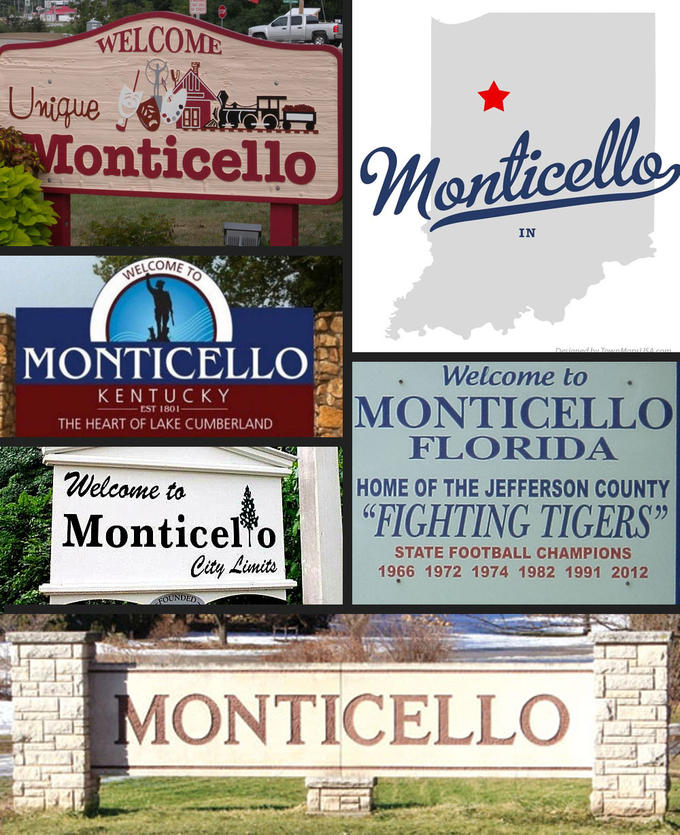 Some time ago, while rooting around in the archives (looking for something else, as usual), I came across a newspaper clipping from the Charlottesville Daily Progress from 1966.  It seems that NBC had just released its new pronunciation manual, which directed newscasters to pronounce Monticello "Monti-SELL-o."

The outcry in Charlottesville was swift and fierce; hero reference librarian Kendon Stubbs of the University of Virginia library flew to the defense of Jefferson's mountaintop home (or at least its correct pronunciation).  I’ll let the Daily Progress tell the story:

Thus it was that Kendon L. Stubbs, the Alderman’s acting reference librarian, turned a few shades red last week when he opened the latest edition of the NBC Handbook of Pronunciation.  The NBC publication, considered something of a pronunciation Bible in the nationwide radio and television industry, blandly dismissed Monticello as pronounced with the “s” sound – as if that was that. Stubbs composed himself long enough to fire off a letter to the NBC editor, who replied, in effect, that while there is some local and regional basis for the “ch” pronunciation, “in general American speech and in use by educated speakers and writers,” it has to be “s”.

The Daily Progress followed the next day with a salty editorial titled thusly:

As you no doubt gleaned from the above incident, “MontiCHELLo” is considered the correct pronunciation for Thomas Jefferson’s home.  But the truth is that pretty much everyone I meet pronounces it “MontiSELLo.”  We have sound historical evidence that Jefferson and his family most likely gave their home its original Italian pronunciation, but out there in the rest of the country, this pronunciation seems to be rare indeed.

A search in the USGS Geographic Names Information Service database turns up over 300 entries for "features" named Monticello ("features" including natural features like streams and forests, as well as man-made things like churches, towns, hospitals, etc.).  Narrowing it down to "populated places" brings the number down to 58.  Of the ones that I could find information for, at least 14 of these places are named after Jefferson's Monticello.  However, my guess is that most pronounce their name "Montisello."  When you take that into consideration, it seems no surprise that most people apply that pronunciation to Jefferson's home as well.  And to be fair to NBC, given the profusion of “Montisellos” and only one “Montichello,” most newscasters are going to be safer, most of the time, going with “Montisello.”  I'm always fascinated by the way that people, places, things, buildings, landscapes, etc. have been influenced by Jefferson, directly or indirectly.  In this case, a significant number of states in the union have a town with an Italian name (Wisconsin has two), because of Jefferson's love affair with all things Italian in the 1770s.  Although kudos to the founders of Monticello, Minnesota, who apparently simply wanted to name their town after their own “little mountain” nearby.

I lived near one such “Montisello” when I was in grad school in Illinois, and I've driven through another Monticello in my own home state of New York.  I’d love to hear from others about their own local Monticello – is it a “Montichello” or a “Montisello”?  And is yours named after TJ’s Monticello, or something else?