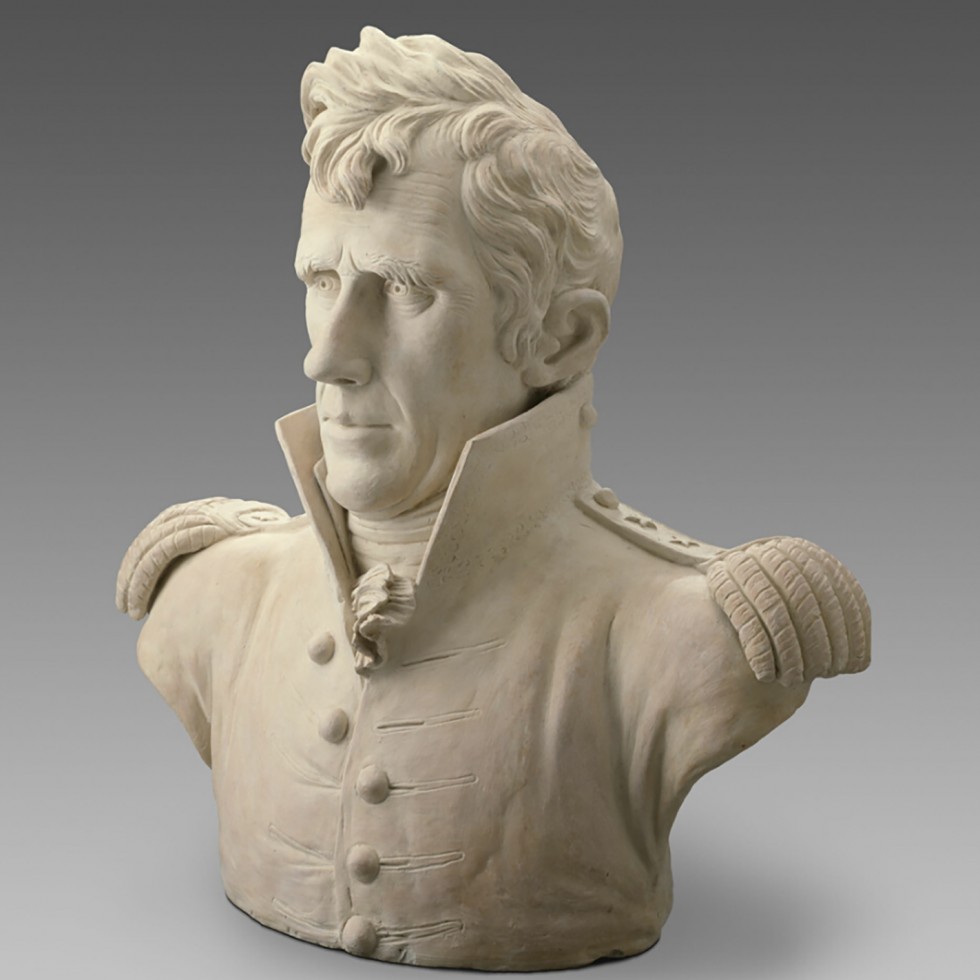 Historical Notes: James Ronaldson, an old friend of Jefferson's who visited Monticello in the 1790s, was a Philadelphian and an admirer of General Jackson. Ronaldson presented a plaster cast of Jackson's portrait by the Philadelphia sculptor William Rush to Jefferson in 1820.[1] Ronaldson wrote Jefferson:

With sentiments of respect & esteem, I beg you to accept a bust of Genl Andrew Jackson, the hero of New Orleans, a citizen whose devotion to his country has proved him worthy her highest confidence. It is the chef d'Oeuvre of Rush, and an evidence of this nation being destined to not less celebrity in Arts than in Arms.[2]

I thank you, dear Sir, for the present of the bust of Genl Jackson. he holds a high place in my esteem, as an undeviating patriot and a military character who has deserved well of his country. I shall give his bust a place in my most honorable suite, with those of Washington, Franklin, Fayette Etc. it's value is moreover heightened as from the hand of an Artist of whom our country has a high and just estimation.[3]

Little is known about which – if any – of William Rush's works were known to Jefferson, or how Jefferson knew of his work. A bust of George Washington by Rush in the collection of the Art Museum of Princeton University has a history of belonging to Jefferson's collection. Although Rush's earliest portrait bust (of Franklin) is dated 1787, Rush's portraits of sitters such as Samuel Morris (1812), Benjamin Rush (1812), and Caspar Wistar (1812-13) were not made until after Jefferson retired from the presidency. At Monticello, Jefferson had no access to new works of art.

Jackson apparently sat for Rush during a four-day visit to Philadelphia in February 1819.[4] Jackson, a major hero of the War of 1812, defended New Orleans against the British in 1815 and had captured two Spanish forts in Florida. At the time that Rush portrayed Jackson, he was a popular champion with obvious political potential. To capture the interest in Jackson, Rush's portrait of him was advertised in places as distant as Charles Town, West Virginia.

It is the intention of Mr. Rush, if the public patronage should be adequate, to furnish any number of casts, at a reasonable price; and we cannot but hope, that patriotism and a love of the arts combined, will insure him success in the undertaking.[5]

Other plasters, all now unlocated, were in the collections of the Boston Athenaeum, the State Library of South Carolina, Peale's Museum, and the American Academy of Fine Arts. Only two versions of the bust are known today, the illustrated terra-cotta example in the Art Institute of Chicago and the plaster in the exhibition owned by the Historic Hudson Valley from the collection of Montgomery Place.