Philadelphia nurseryman Bernard McMahon (1775-1816) has often been described as Thomas Jefferson's gardening mentor; and his classic work, The American Gardener's Calendar, first published in 1806, has been described as Jefferson's horticultural "Bible."[1] McMahon forwarded the newest vegetable and flower varieties to Jefferson, who would often follow the directions in the Calendar step-by-step when planting tulips in his flower beds or sea kale in his vegetable garden. McMahon also served as curator for the plants collected by the Lewis and Clark expedition, published the first seed catalogue in the United States, and was honored by botanist Thomas Nuttall, who in 1818 bestowed the genus name Mahonia on a group of west-coast evergreen shrubs still popular in American gardens.

McMahon's chief legacy was his American Gardener's Calendar, the most comprehensive gardening book published in the United States in the first half of the nineteenth century; popularity and influence can be gauged by the eleven editions that were printed up to 1857. The 648-page Calendar was modeled on a traditional English formula, providing month-by-month instructions on planting, pruning, and soil preparation for the various horticultural divisions – the kitchen garden, fruit garden, orchard, nursery, etc. McMahon borrowed extensively from English works, especially those of Philip Miller and particularly from John Abercrombie, author of Every Man his own Gardener, first published in York in 1767 under the name of Thomas Mawe, at the time a more recognizable figure. McMahon's sixty-three-page "General Catalogue" of recommended garden plants (3,700 species) was unrealistically biased in favor of traditional Old World species. It is doubtful whether a majority of them were then found in the United States; one also wonders how many American gardeners actually possessed an English-style fruit garden, much less a greenhouse or hothouse, in 1806? A renowned English contemporary, J.C. Loudon, suggested the derivative character of the Calendar in 1822: "We cannot gather from the work any thing as to the extent of American practice in these particulars."[2]

Nevertheless, McMahon's Calendar appealed to Jefferson because it attempted to deal with some of the unique problems of American gardening. McMahon made a concerted effort to break away from English traditions in the way he celebrated the use of native American ornamentals, championed large-scale cider and seedling peach orchards that could be grazed with livestock, and admitted the harsh realities of eastern North America's continental climate.

McMahon reinforced Jefferson's custodial pride in the culture of American plants. It was in the Calendar that American gardeners were first urged to comb the local woodlands and fields for "the various beautiful ornaments with which nature has so profusely decorated them." Wildflowers, according to McMahon, were particularly suited for the hot, humid summer when American gardens "are almost destitute of bloom." McMahon continued, "Is it because they are indigenous that we should reject them? ... What can be more beautiful than our Lobelias, Orchis, Asclepias, and Asters? ... In Europe plants are not rejected because they are indigenous ... ; and yet here, we cultivate many foreign trifles, and neglect the profusion of beauties so bountifully bestowed upon us by the hand of nature."[3]

McMahon's Calendar also included the first American essay on landscape design. Titled "Ornamental Designs and Plantings," this eighteen-page treatise may have inspired Jefferson's design schemes for the roundabout flower border and oval beds on the west lawn at Monticello. Following the dictates of English landscape designer Humphrey Repton, McMahon promoted the new, informal style of naturalistic gardening. He urged his readers to consult "rural disposition, in imitation of nature" that would include "winding walks, all bounded with plantations of trees, shrubs, and flowers in various clumps."[4] The use of broad lawns, thickets, and irregularly-shaped flower beds were further ways of banishing traditional, formal landscape and garden geometry. Few American gardening books have so thoroughly combined landscape gardening and horticulture like Bernard McMahon's American Gardener's Calendar. McMahon's writings provided a foundation for the popularity of Andrew Jackson Downing, generally considered the father of landscape design in this country.

Who was Bernard McMahon? Information on this gardening pioneer is scanty. Born in Ireland "of good birth and fortune," he moved to Philadelphia in 1796 to avoid political persecution and soon established a seedhouse and nursery business by 1802. In that year (or perhaps in 1803) he published a broadsheet entitled "A CATALOGUE OF GARDEN GRASS, HERB, FLOWER, TREE & SHRUB-SEEDS, FLOWER ROOTS, ETC." that included 720 species and varieties of seed. Considered the "first seed catalogue" published in this country, it is a landmark index to the plants introduced and cultivated in the United States at that time. For instance, this list supplements the documented plantings of Jefferson in the yearly plantings of the flower gardens at Monticello. In 1804 another catalogue of thirty pages, mostly devoted to native American seeds, was published.

Beginning in 1806, McMahon was trusted with seeds and plants collected from the Lewis and Clark expedition. Jefferson insisted that these new discoveries were the property of the expedition and of the federal government, so McMahon was forced, perhaps rightfully so, to grow these novelties under restriction in a quarantine-like situation. As well, sticky complications and fierce personal rivalries arose over the description, illustration, and release of the plants, which included golden currant (Ribes aureum), snowberry (Symphoricarpus albus), and Osage orange (Maclura pomifera): as many as twenty-five undescribed species. Botanical historian and scholar Joseph Ewan observed, "It must have tried his soul on occasion to have to weed and water these plantings through the years without realizing thereby either the aura of publicity for his nursery or the personal satisfaction of guardianship for what were precious discoveries of new genera and species eventually announced, not in America, but in England!"[5]

In 1808 McMahon purchased twenty acres for his nursery and botanic garden that would enable him to expand his business. A steady stream of correspondence, thirty-seven letters, passed between himself and Jefferson until 1816, when McMahon died at his "Botanical Garden, called Upsal." The nursery business was left to his wife, who, according to Ewan, "conducted it under difficulties that would have appalled most women."[6] Their son, Thomas P., was also involved in the business, as well as further publications of the Calendar.

The most vivid written document to survive regarding McMahon and his Philadelphia seedhouse was written by John Jay Smith, editor of The Horticulturist, for the eleventh edition of the Calendar in 1857. Smith's memoir suggests the ferment of botanical and horticultural activity at the time:

Many must still be alive who recollect its [the store's] bulk window, ornamented with tulip-glasses, a large pumpkin, and a basket or two of bulbous roots; behind the counter officiated Mrs. M'Mahon, with some considerable Irish accent, but a most amiable and excellent disposition .... Mr. M'Mahon was also much in the store, putting up seeds for transmission to all parts of this country and Europe, writing his book, or attending to his correspondence, and in one corner was a shelf containing a few botanical or gardening books ... ; another contained the few garden implements, such as knives and trimming scissors; a barrel of peas, and a bag of seedling potatoes, an onion receptacle, a few chairs, and the room partly lined with drawers containing seeds, constituted the apparent stock in trade of what was one of the greatest seed stores then known in the Union.

Such a store would naturally attract the botanist as well as the gardener, and it was the frequent lounge of both classes, who ever found in the proprietors ready listeners as well as conversers ... they were rather remarkable, and here you would see Nuttall, Baldwin, Darlington, and other scientific men, who sought information or were ready to impart it.[7]

A portrait of Bernard McMahon by an unidentified Philadelphia artist was revealed to us by a McMahon descendent, Betty Carter Fort of Washington, D.C. Although it is impossible to verify that the portrait is indeed our pioneer American nurseryman, the force of his surprisingly powerful gaze suggests a certain wily intelligence. Here, we suspect, is a sensibility worthy of the responsibility for the Lewis and Clark botanical collection; the authoritarian visage of the author of America's best gardening book of the early nineteenth century. 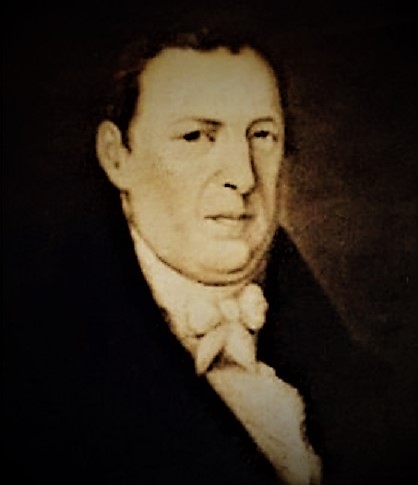