Elizabeth (Betty) Hemings (1735-1807) was the matriarch of a prominent and extensive family that made up a third of the population at Monticello, the largest family to ever call Monticello home. Ties of bondage and kinship forever intertwined the Hemings and Jefferson families, demonstrating the complex nature of relationships between enslaved people and their owners. Elizabeth Hemings's children and descendants occupied the most important household and trades positions on the mountain, and many of her children were allowed to hire themselves out and keep their earnings, an uncommon experience among those enslaved by Thomas Jefferson. Three of her children and six of her grandchildren were the only people Thomas Jefferson freed. Her daughter, Sally Hemings, became one of the most well-known enslaved women in American history due to Jefferson's paternity of her children, a connection that inspires continued evaluation and exemplifies the complexity of race and slavery in America.

Elizabeth Hemings was the daughter of an English sea captain and an enslaved African woman. She had twelve children, six of whom were likely fathered by one of her masters, John Wayles, Thomas Jefferson's father-in-law. Upon Wayles's death, Hemings was brought to Monticello with her children and she lived there until the end of her life.

Elizabeth Hemings's exact birthplace is not known, and very little is known about her parents. Her mother was described as a "fullblooded African" woman; some historians believe she may have been a woman in the records named Parthena.[1] Her father was described as an English sea captain. The story of Elizabeth Hemings's infancy survives through her grandson, Madison Hemings:

I never knew of but one white man who bore the name of Hemings; he was an Englishman and my greatgrandfather. He was captain of an English trading vessel which sailed between England and Williamsburg, Va., then quite a port. My great-grandmother was a fullblooded African, and possibly a native of that country. She was the property of John Wales, a Welchman. Capt. Hemings happened to be in the port of Williamsburg at the time my grandmother was born, and acknowledging her fatherhood he tried to purchase her of Mr. Wales, who would not part with the child, though he was offered an extraordinarily large price for her. She was named Elizabeth Hemings. Being thwarted in the purchase, and determined to own his flesh and blood he resolved to take the child by force or stealth, but the knowledge of his intention coming to John Wales' ears, through leaky fellow servants of the mother, she and the child were taken into the "great house" under their master's immediate care. I have been informed that it was not the extra value of that child over other slave children that induced Mr. Wales to refuse to sell it, for slave masters then, as in later days, had no compunctions of conscience which restrained them from parting mother and child of however tender age, but he was restrained by the fact that just about that time amalgamation began, and the child was so great a curiosity that its owner desired to raise it himself that he might see its outcome. Capt. Hemings soon afterwards sailed from Williamsburg, never to return. Such is the story that comes down to me.[2]

Although Madison Hemings cites "John Wales" as the master of Elizabeth Hemings and her mother, the historical record is less clear. Francis Eppes owned Hemings's mother, but he died in 1734 and Jefferson's farm book states that Hemings was born in "abt" 1735.[3] The records show that Wayles's official ownership of Hemings began in 1746 when he married Martha Eppes, the daughter of Francis Eppes.[4] Despite the murkiness of the details, the story of Hemings's infancy illuminates a significant moment in Elizabeth Hemings's early life.

Throughout her life as an enslaved house servant, Hemings navigated a world of daily interactions with the people who owned her, and with whom her life was intricately connected in a myriad of ways. As a young child, she was owned by the Eppes family and may have been used as a companion or playmate to their children. As she grew older, she became an enslaved servant in the house.[5] When Hemings was eleven, she was moved from her home at the Eppes family estate when Martha Eppes married John Wayles and brought enslaved people with her. Hemings grew up at Wayles's plantation, "the Forest," in Charles City County, across the river from her former home.[6] It is possible that she served as a nurse or "minder" to Martha Wayles — John Wayles's daughter and Thomas Jefferson's future wife — while living at the Forest.[7] No matter the specifics of her occupation as an enslaved domestic servant, Elizabeth Hemings and the young Martha Wayles lived closely entangled lives. Hemings was even present, along with other Hemings women, at Martha Wayles's death.[8]

At the age of eighteen, Hemings had her first child, Mary, with an unknown black man who fathered three more of her children — Martin, Betty, and Nancy.[9] The status and name of this man are unknown, and he was only later described as a "darker" mulatto.[10] The year after Nancy was born, Hemings gave birth to her son Robert — the first of six children fathered by John Wayles. Wayles took Elizabeth Hemings as his "concubine" after the death of his third wife; their children were Robert, James, Thenia, Critta, Peter, and Sally Hemings.[11] No record remains from Wayles or his immediate legal family regarding his paternity of Hemings's children, but several accounts in the historical record support that he was the father. Three years after Sally was born, Hemings had a son, John, with Jefferson's chief carpenter, Joseph Neilson.[12] It is possible that Hemings's youngest daughter, Lucy, was also fathered by Neilson, but she died in childhood and Madison Hemings makes no mention of her paternity.

Other information about Elizabeth Hemings comes from archeological research and Jefferson's plantation records. According to those records and the site that archeologists have found, Hemings lived in her own cabin from 1794 until her death in 1807. Like other enslaved people at Monticello, she had a garden from which she sometimes sold chickens, eggs, and produce to the Jefferson family.[13] At her home, archeologists have found remnants of fine serving ware that she and her family purchased, and while it was not uncommon for enslaved individuals at Monticello to buy their own possessions, the high quality of Hemings's dishes would have set her and her family apart from enslaved people working in the fields.

When Hemings passed away, she had eight living children, over thirty grandchildren, and at least four great-grandchildren. She saw three of her children already freed, and may have suspected that some of her other descendants had a path to freedom.[14] Madison Hemings's memoir includes an account of his grandmother's deathbed. Three years old at the time, he offered his grandmother some of the bread he was eating, and she said, "Granny don't want bread any more."[12] She passed away soon after at the age of seventy-two.[16]

Although Elizabeth Hemings spent her whole life in bondage, she bridged the worlds between her own mother's enslavement from Africa and her children's freedom in America. Even within a patriarchal and racist environment, Hemings seemingly brought her family up towards freedom and maintained a respected status as the leader of this important family. She nurtured and led a family that shaped Monticello and influenced American history. Many of her descendants through her children Mary Hemings Bell, Betty Brown Hemings, Peter Hemings, and Sally Hemings have been interviewed as a part of the Getting Word oral history project. 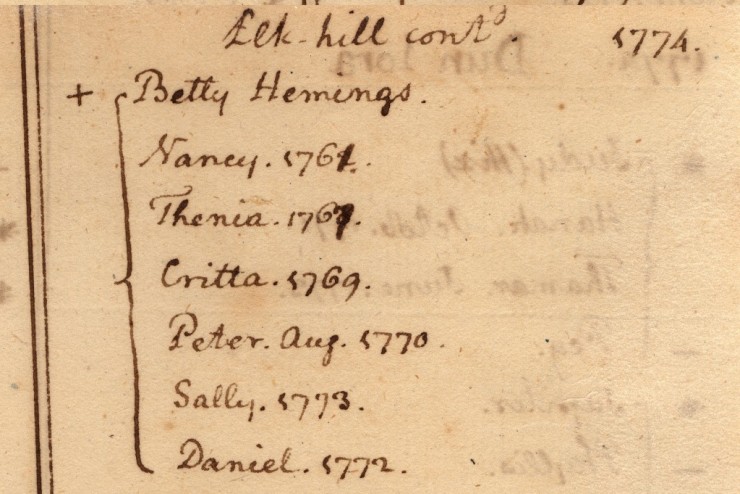 Though most people are probably more likely to recognize the name of her daughter, Sally Hemings, Elizabeth Hemings was a powerful leader of an extensive family that was ingrained in all parts of life at Thomas Jefferson's plantation home. Monticello Guide Olivia Brown looks at her life and legacy.