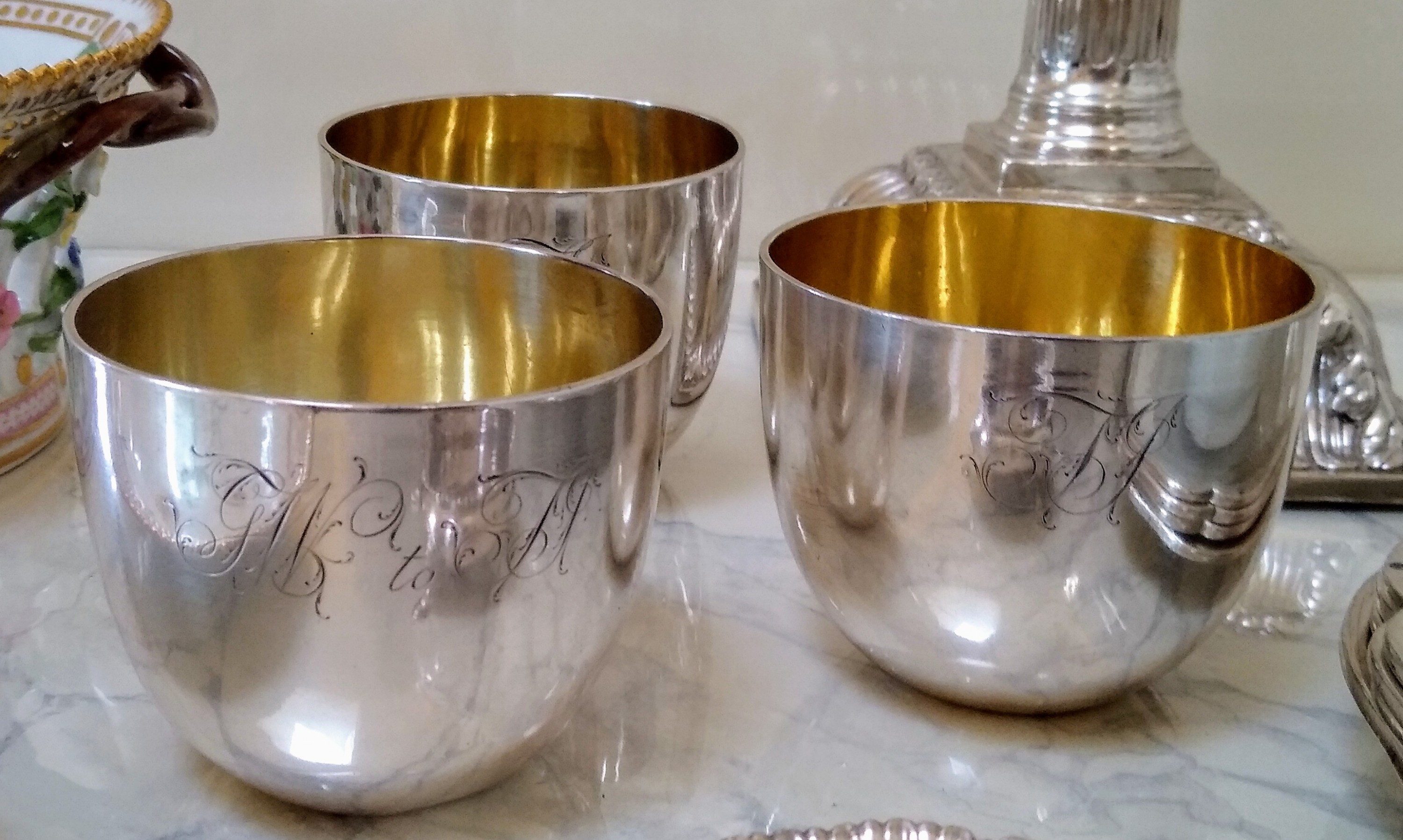 Historical Notes: In 1806 Jefferson's friend and teacher, George Wythe, died, leaving him a bequest that included his "silver cups." Correspondence between the executor of Wythe's estate and President Jefferson reveals that there were two cups but provides no further description.[1] They might have had outmoded Rococo decoration. For that or another reason, Jefferson decided to have them melted down. The Wythe cups and two of Jefferson's own canns (round-bellied mugs) were converted into a new set of eight tumblers in 1810.[2]

Tumblers, a popular form of silver cup from the seventeenth through the eighteenth century, were a type of low round-bottomed cup hammered from a disk of silver with a base proportionately thicker than the sides. The heavier bottom to the cup provided stability and helped prevent spilling. Tumblers were often used in traveling sets, or canteens.[3]

Jefferson contacted a silversmith named John Letelier in 1810 to reshape his cups. The son of a Philadelphia silversmith of the same name, John Letelier began working with his father in that city in the 1790s. Father and son often used the same marks, making the younger Letelier's work and history difficult to distinguish from the elder's. Both Leteliers moved to Wilmington, Delaware, then to Chester County, Pennsylvania, and back to Wilmington around 1799 where John Letelier, Jr., began to practice dentistry in addition to silversmithing.[4]

Jefferson's first known contact with John Letelier came in 1806 when he purchased an etui for himself (Cat. 225) and a silver cann to give to Rev. Charles Clay, an Albemarle County minister who had presided over family funerals at Monticello and who now lived near Jefferson's Poplar Forest in Bedford County.[5] Letelier appears to have been working in Richmond at that time but probably moved to Washington or Alexandria, and Jefferson again sought him out when he wrote to his Richmond agent, George Jefferson, in 1808:

Mr. Le Telier, a goldsmith, who lived a considerable time in Washington & did a good deal of work for the President’s house, & to great satisfaction is said to have removed to Richmond. is he there & in a situation to execute a considerable job? say two silver terrines & some other things ....[6]

Letelier, who was again in Richmond, agreed to do the work for Jefferson. When confirming the order, Jefferson sent Letelier two designs for tureens, "the upper being that preferred," but neither the drawings nor the tureens survive, apparently destroyed when the President's House was burned in 1814.[7]

Pleased with Letelier's work, on March 27, 1810, Jefferson, who was now retired to Monticello, wrote to him again:

Being just setting out on a journey, I have directed ... a pair of Cans and a pair of Beakers to be sent to you to be melted & put into the form of a plated cup, which will be sent with them as a model. the Cans & beakers weigh a little over 40. oz. avoirdupoise, the model a little over two ounces & a half. but it is too thin & weak for common use. I think those to be made should be of 5. oz. avoirdupoise weight nearly. they must also be about half an inch higher, in order to hold a little more than the model does in every other respect I would wish the model to be exactly imitated. I suppose the metal of the Cans & beakers will make about 8. cups such as desired. that number however I would wish to recieve even if additional metal should be necessary. mark 4. of them if you please G. W. to T. J. and the others simply T. J. all in the cypher stile. if you can gild the inside as the model is it would be desirable. ... I am too well acquainted with the stile of your execution to suppose it necessary to add any recommendations on that subject. accept the assurances of my esteem.[8]

The model to which Jefferson refers is almost certainly the unornamented two-inch-high tumbler of fused silverplate with gilt interior that descended in the Randolph family. As he described, its sides are very thin, and it weighs about 2.2 ounces avoirdupuis. Jefferson probably acquired this cup in Paris; in 1787 he recorded thirty livres paid for "a silver cup for me."[9]

Each of Letelier's tumblers is 2 5/8 inches high and weighs about 4.8 ounces avoirdupuis, corresponding quite closely with Jefferson's instructions. With five of the eight original tumblers exhibited, three are marked "G.W. to T.J." and two simply "T.J."; all of them are inscribed on the bottom: "J.L.'T. Maker."

The silver tumblers remained at Monticello for the rest of Jefferson's life. They were apparently part of his regular dining table equipage, for a visitor to Monticello in 1815 wrote, "The drinking cups were of silver marked G.W. to T.J., the table liquors were beer and cider and after dinner wine."[10] In the 1830s Martha Jefferson Randolph apparently distributed the cups among her family, giving one cup each to six of her children and one to a grandson. Six of these cups survive. The seventh cup is unlocated and the descent of the eighth cup is unknown.

Jefferson is not known to have made any further purchases from Letelier, but he did write to him once more in 1817: "I live about three miles from a pleasant & respectable village called Charlottesville. ... We want a good silversmith in the town & such an one would find more work than he could do, and ready money always."[11] Letelier, however, politely declined Jefferson's offer, explaining that he was prevented from doing so because of the positions he held as Keeper of the Poorhouse and Keeper of the City Magazine in Richmond.[12]