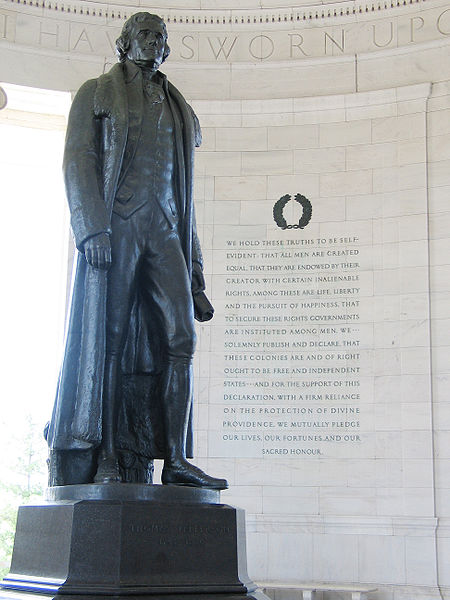 The statue of Thomas Jefferson in the Jefferson Memorial in Washington, D.C., was created by Rudolph Evans and installed in 1947.

On July 25, 1939, Chairman Fiske Kimball of the Committee on Sculpture, reported to the Commission that the jury of prominent men selected to judge the application was composed of Henri Marceau, the Chairman, and two sculptors: James Earle Fraser and Heinz Warneke. They had met in Washington and spent three days going over the 101 sets of photographs submitted by the applicants. The six sculptors selected to compete in the second stage of competition were Rudolph Evans, Raoul Josset, Lee Lawrie, Maurice Sterne, Sidney Waugh, and A.A. Weinman.

The statue of Thomas Jefferson is placed in a central position in the Memorial Hall, and stands 19½ feet high on a base 6 feet above the floor. The dates of Jefferson's birth and death (1743-1826) are inscribed in bronze letters on the front of the pedestal. A temporary plaster figure was erected in 1942, and the permanent bronze statue was installed in 1947.