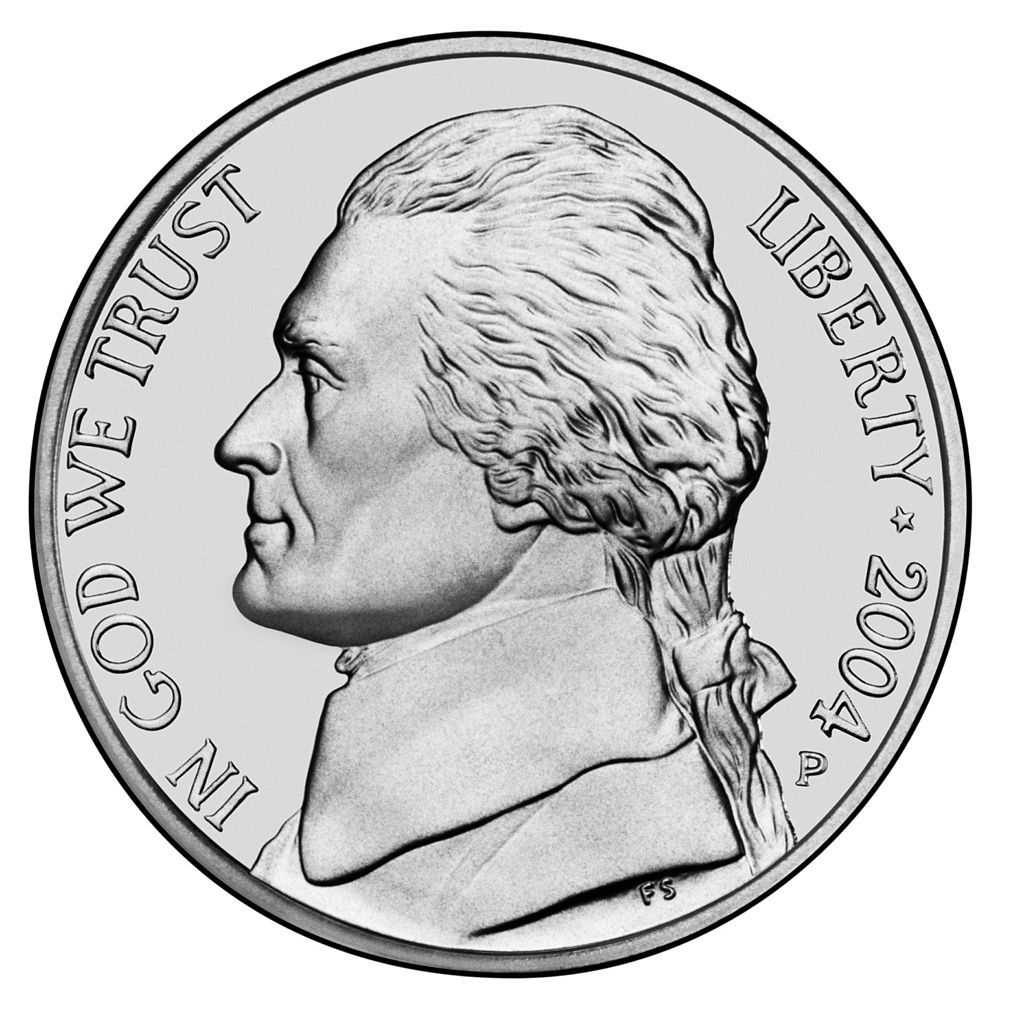 In 1938, the United States Treasury elected to stop minting the Buffalo nickel. The Buffalo nickel (also known as the Indian Head nickel) had just completed its mandatory twenty-five year circulation, and since the new President, Franklin D. Roosevelt, was an admirer of Thomas Jefferson, the U.S. Mint announced a contest to design a coin in honor of the third President. The winning entry would receive a $1,000 prize. Normally, the Chief Sculptor-Engraver of the Mint created American coins, but for the Jefferson five-cent piece, the general public was invited to submit designs. Three hundred and ninety contestants did so. 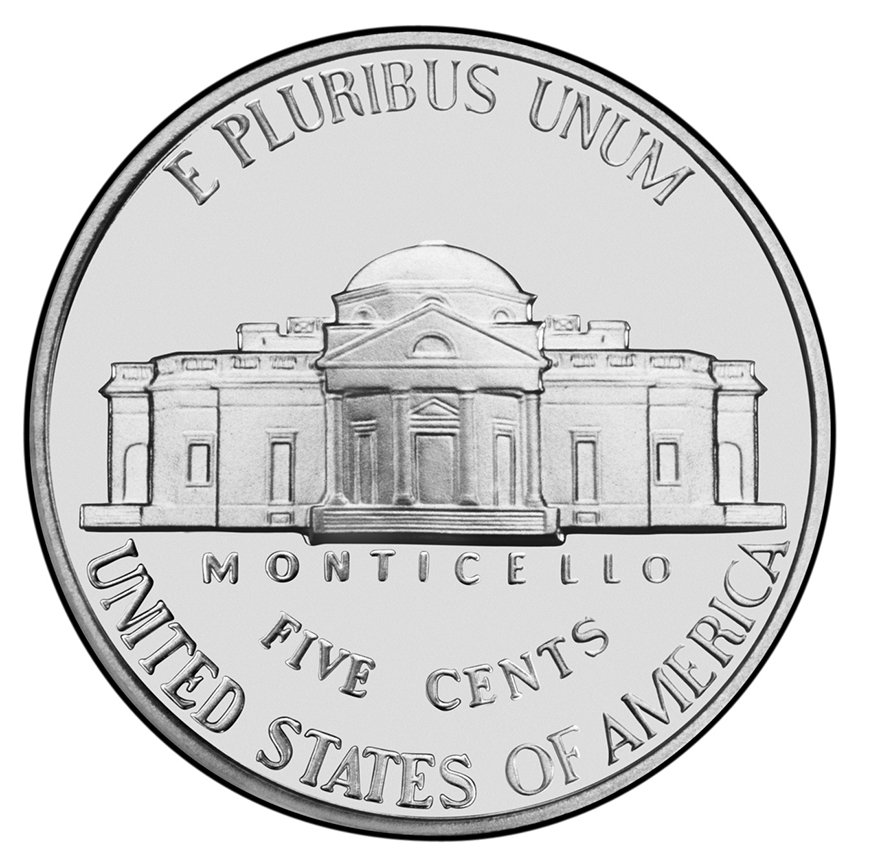 The winning artist, Felix Schlag, was a German immigrant who first came to the United States in 1929. He spent four weeks on his version of the new coin. In the letter that notified him of his success, Schlag learned that the "President saw your designs and was quite complimentary about them."  The obverse, or face, Schlag based on a Gilbert Stuart portrait he had encountered in an art book. On the reverse, he depicted Monticello. His version of the mansion underwent drastic revision before minting, but once released in 1938, Schlag's design remained virtually unchanged for sixty-six years.

Though the images on the coin have undergone little change, there have been some variations in the metal content of the "nickel." For most of its history, the Jefferson nickel has contained an alloy of 75% copper and 25% nickel. From 1942-1946, however, a war-time version of the coin circulated. Its metal content was 56% copper, 35% silver, and 9% manganese. The nickel normally used in currency was diverted to military uses.

The striking of the 1938 coin was not the first depiction of Thomas Jefferson on the country's currency. In 1869, his likeness had appeared on the two-dollar bill. 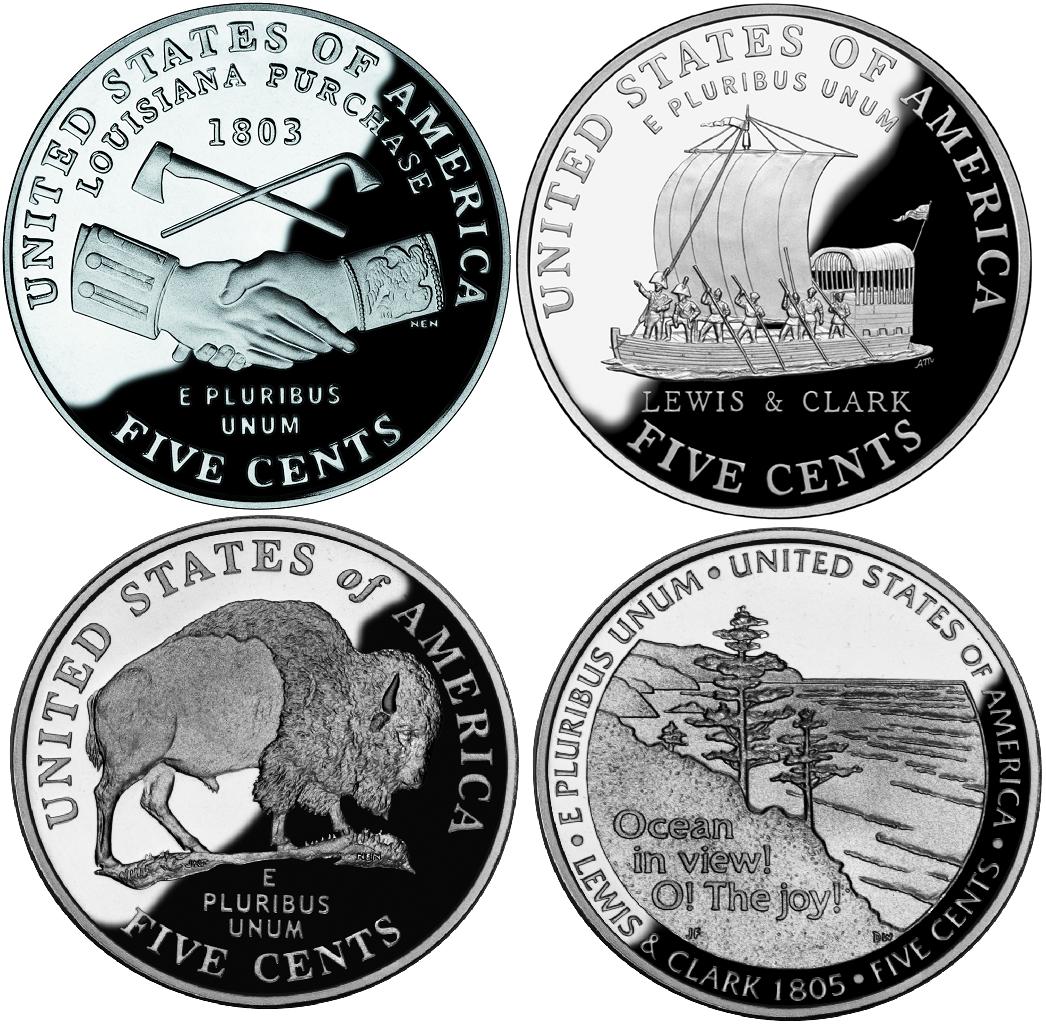 In 2004, for the first time, the reverse side of the nickel (the Monticello side) was changed to commemorate the bicentennial of the Lewis and Clark Expedition. One minting depicted the Indian Peace Medal and the other illustrated the keelboat from the expedition. 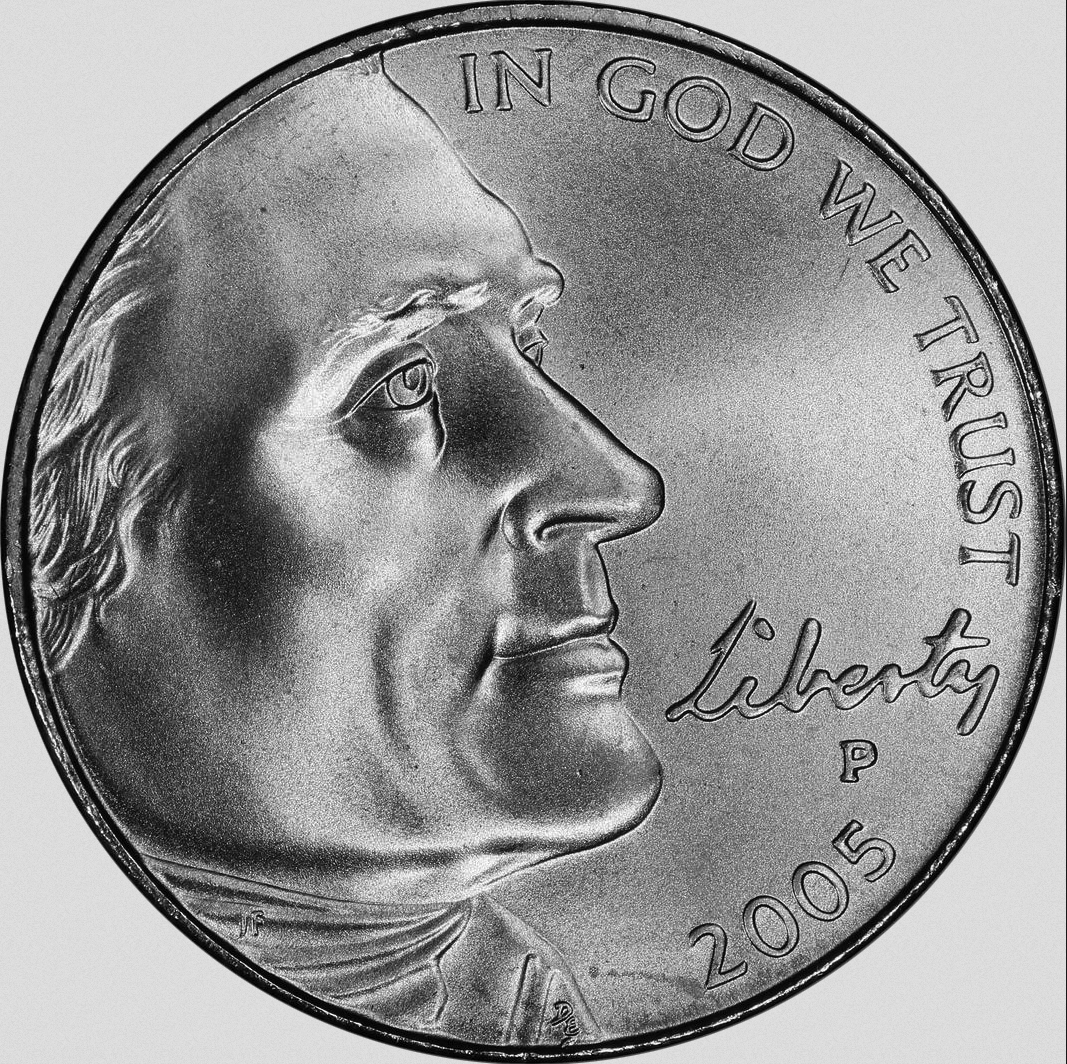 In 2005, the U.S. Mint included a new image of Jefferson on the front of the nickel to give a more modern look to the coin. The image was designed by Joe Fitzgerald. The Mint also planned two different reverse sides of the coin along the theme of "a Westward Journey." One design featured the American bison, and the other depicted the Pacific Ocean — the ultimate goal of the Lewis and Clark Expedition. 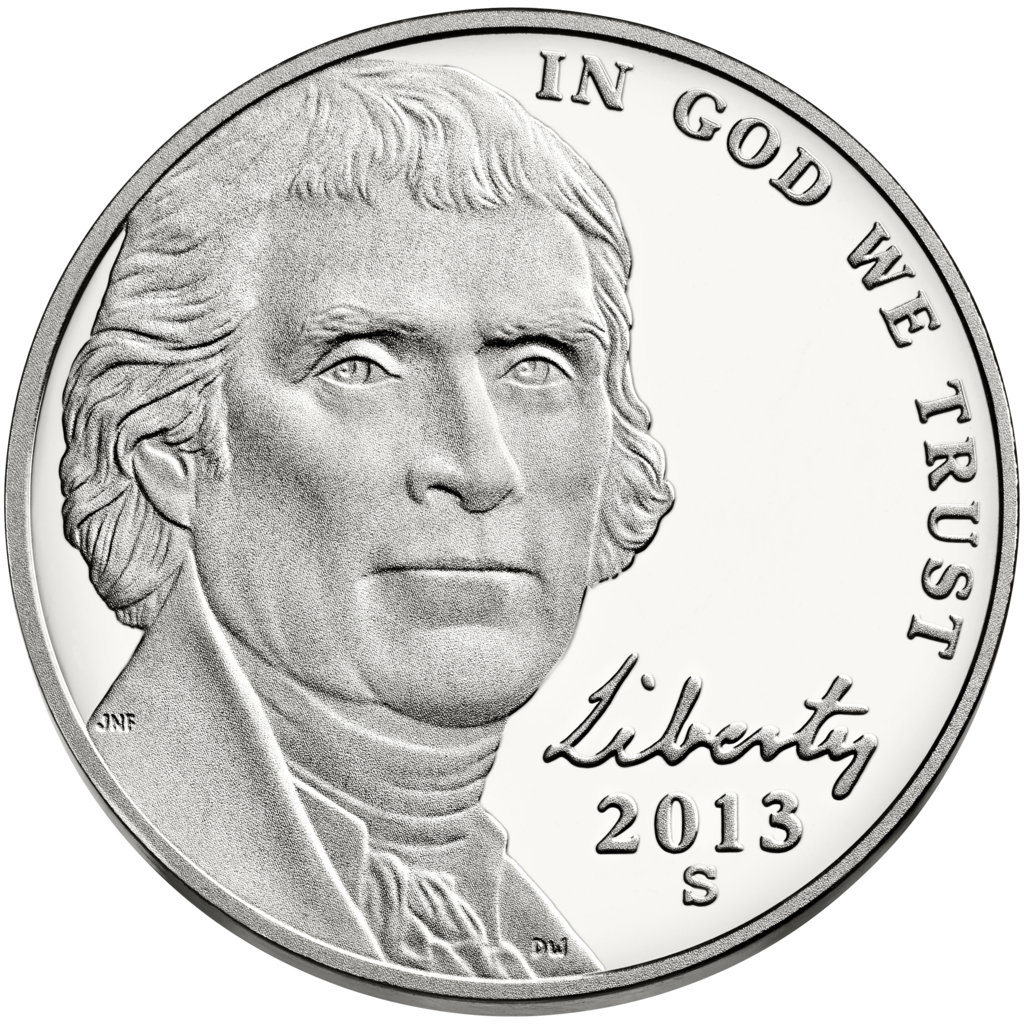 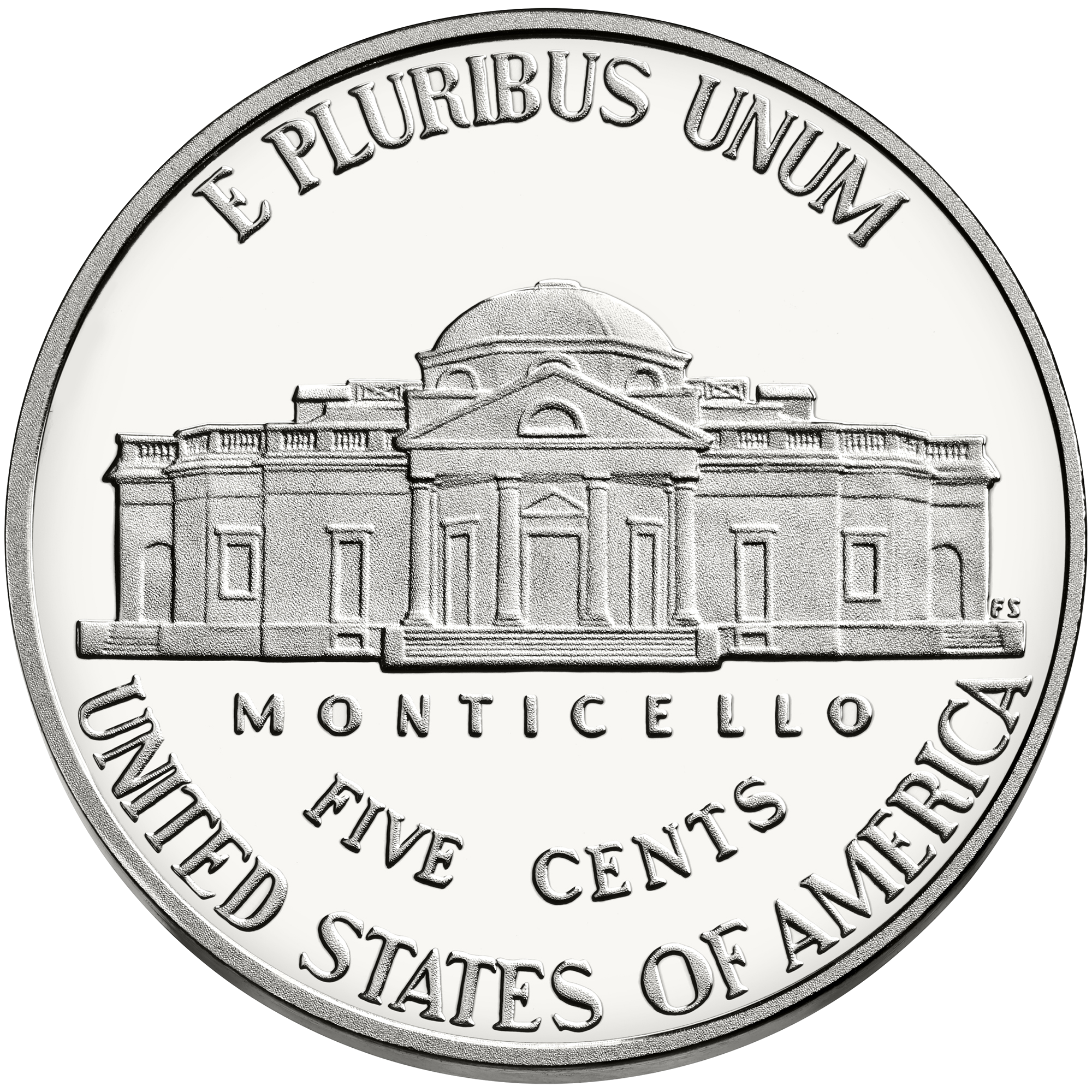 In 2006, the nickel returned to using Felix Schlag's Monticello design on a newly cast reverse, while the obverse featured a new forward-facing portrait of Jefferson, based on the 1800 Rembrandt Peale portrait. It is the first U.S. circulating coin that features the image of a President facing forward. The new obverse was designed by Jamie Franki. It is more detailed than the 1938 image, thanks to modern minting technology.