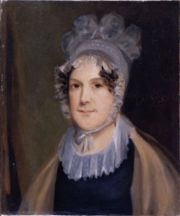 Historical Notes: Jefferson wrote James Westhall Ford on September 1, 1823, that he requested "the attendance of mr Ford at Monticello to take the portrait of mrs Randolph when it shall suit his convenience."[1] Mrs. Randolph, then the mother of eleven children, was fifty-one years old. Ford must have come to Monticello almost immediately for he painted not one but two portraits — Mrs. Randolph and her eldest daughter, Ann Cary Randolph Bankhead — by the end of the month. Jefferson paid "Jas. W. Ford for 50 D. for 2 portraits" on September 29, 1823.[2]

Jefferson evidently was pleased with young Ford's work (he was only seventeen) and recommended him to others as soon as he had finished the portraits at Monticello. "... with general approbation he has drawn two portraits for me, both esteemed .... his good execution, and the reasonableness of his terms render him worthy of encouragement and patronage."[3]

Ford's career, much of it spent as an itinerant portrait painter in Virginia, was advanced by Jefferson's endorsement. The artist later wrote that he "promised Mr. Jefferson to paint the faculty of the University of Virginia — which has been done some years past."[4]