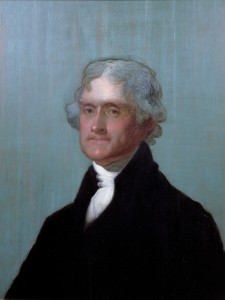 Thomas Jefferson's image was taken from life at least twenty-five times, from the romanticized representation of a minister to France at age forty-three by Mather Brown to John H. I. Browere's life mask of the sage of Monticello in his eighty-third year. Jefferson sat for portraits molded in wax, plaster, and marble, and executed in oil, gouache, crayon, and gold leaf on canvas, wood, paper, and glass. Those who tried to capture his image varied in fame and talents from the American engraver Amos B. Doolittle to the internationally renowned sculptor Jean-Antoine Houdon.

Asked by a friend, architect William Thornton, to name the best of the widely differing productions of this assorted group of artists, Jefferson replied: "I am not qualified to say any thing: for this is a case where the precept of 'Know thyself' does not apply. the ladies from the study of their looking glasses may be good judges of their own faces; but we see ours only under a mask of soap-suds and the scrapings of the razor."[1]

Qualified judgments aside, Jefferson was known to have two favorites. Members of his family recorded that he considered the monumental bust by Giuseppe Ceracchi the chef d'oeuvre of all attempts to portray him from life. This marble portrait, which his family thought an "excellent likeness," depicted Jefferson at the age of forty-eight in Roman garb. It dominated the entrance hall of Monticello for many years. The image that William Wirt called "exquisite" and Thornton pronounced "superb" was unfortunately forever lost in the fire in the Library of Congress in 1851.[2]

The family favorite appears to have been the "medallion" profile taken in 1805 by Gilbert Stuart. Jefferson spoke of it as "a very fine thing,"[3] and as the portrait "deemed the best which has been taken of me."[4] Further evidence of his approval is its inclusion, along with the two other Stuart portraits and one by Rembrandt Peale, in his list of candidates for an "approved" likeness of himself, and his distribution, among friends, of the David Edwin engravings made from it.[5] Daughter Martha Jefferson Randolph considered it "the better likeness of the two hanging at Monticello," according to one great-granddaughter, and Martha Randolph may have been the original source of another great-granddaughter's assessment: "[It] best gives the shape of his magnificent head, and its peculiar pose."[6] Contemporaries were also enthusiastic. Thornton called it "one of the finest I ever saw,"[7] and artist William Birch thought it "the best thing that ever was done of him."[8]

While Jefferson was not one to single out for blame the artists who had failed in their efforts to seize his image for posterity, some of his contemporaries were less reticent. For William Short, the 1786 portrait by Mather Brown contained "no feature" of his subject.[9] Despite the popularity of engravings based on it, William Thornton's outraged comment on seeing the Bass Otis portrait of 1816 was: "Never was such injustice done to [Jefferson], except by Sign Painters, and Genl Kosciusko."[10] And of the effort by amateur artist and professional patriot Thaddeus Kosciusko, now known only from an aqua tint by Michel Sokolnicki, Thornton further lamented: "[N]othing can be so bad, and when I saw it, I did not wonder that he lost Poland—not that it is necessary a Genl should be a Painter, but he should be a man of such Sense as to discover that he is not a Painter."[11]

In 1825, John H. I. Browere, a specialist in life masks, approached the aging Jefferson about a new likeness. Browere began his campaign with a verbal flourish: "If the Love of Liberty, still predominates in your venerable breast, which we doubt not; and, if an Equal desire of advancing the Fine Arts in the Western World fill your heart," then perhaps Jefferson would permit the artist to call at Monticello.[12] Browere promptly arrived in Virginia, and Jefferson submitted himself to an artistic ordeal that would almost prove fatal. For Browere's plaster bust, Jefferson's head was encased in several coats of thin grout. Jefferson's groans drew to his side the frightened family members who made far more of this incident than he ever did.[13] Yet after Browere's hurried departure from Monticello with the fragments that had been pared from his subject's head by chisel and mallet, Jefferson wrote: "I now bid adieu for ever to busts & even portraits."[14] Less than a year later he made a final adieu to all on July 4th, safe at last from the demands of those who wished only to record his appearance for future ages.

One of the most demanding and persistent artists had been Gilbert Stuart, to whom Jefferson sat for three portraits. He may have first met the greatest of the early American portraitists in London in 1786. Jefferson, in England to collaborate with John Adams in treaty negotiations, paid a servant at "Stewart's."[15] He may have been at Stuart's residence in New Burlington Street, where the public was invited to view the artist's work in magnificently furnished rooms. From 1797 until the end of the century, both men lived in Philadelphia, but despite this and their years of acquaintance, sittings for the first Stuart portrait of Jefferson did not take place until May 1800. Jefferson paid Stuart his usual fee of $100.00 before the painting had received its finishing touches, a mistake that others had made before him.[16] More than twenty years were to pass before Jefferson received an oil portrait by Stuart and the result of the 1800 sitting has disappeared without a trace.

In the meantime, Jefferson assumed the presidency and took up residence in the President's House in Washington, where Stuart lived from 1803 to 1805. In the spring of 1805, Stuart informed Jefferson that he was "not satisfied" with the original 1800 portrait and "begged" the president to sit to him again.[17] It is quite possible that the incentive for this request was James Bowdoin's commission for a portrait of Jefferson. This would be especially true if the 1800 portrait was no longer in Stuart's possession. In any case, Jefferson duly submitted to further sittings, probably at Stuart's studio at F and Seventh streets. But this was certainly not the ordeal of a life mask or a session with a physiognotrace.

Stuart, strikingly disordered in dress and enveloped in a cloud of snuff that often caused his sitters to sneeze, would regale his sitters with "colloquial powers of the first order," as William Dunlap put it. Dunlap further recalled: "It is no task to sit to Stuart; his conversation rendered it a pleasure."[18] One of the topics of conversation in 1805 was the painting then going on inside the remodeled Monticello. Stuart took his palette and on the spot mixed up a grass-green to serve as a sample of the color Jefferson wished to paint the floor of his entrance hall.[19]

After producing the gouache and crayon "medallion" profile as well as the second portrait, known as the "Edgehill," Stuart received another $100.00 from a grateful and generous Jefferson.[17] Stuart retained the oil portrait in order to have it engraved and, as the years passed, he proceeded to forget the reason for its existence and to assume its ownership in his own mind. Jefferson, enlisting intermediaries from a distant Monticello, did not succeed in obtaining it until 1821.[21] This portrait remained in the family for over a hundred years, hanging first at Monticello and then at Edgehill, the home of Jefferson's grandson, Thomas Jefferson Randolph.

Despite its lone private ownership, the "Edgehill" portrait, through the engravings based on it, provided the image that became the most popular and enduring icon of Jefferson. The return, even for limited periods, of this magnificent painting to Monticello, where it will hang in the parlor, will bring the interior of the house an important step closer to its appearance during Jefferson's lifetime. Beyond the fact that he considered it among four of the best portraits painted of him, we shall never know Jefferson's final judgment of this work of art because he would never make a ruling in his own case: "[O]f the merit of these [four portraits] I am not a judge, there being nothing to which a man is so incompetent as to judge of his own likeness. he can see himself only by reflection, and that of necessity full-faced or nearly so."[22]