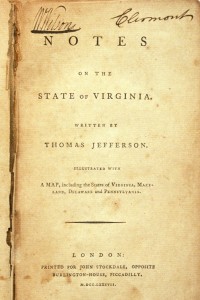 1787 Stockdale edition of Notes on the State of Virginia. Thomas Jefferson Foundation, Inc.

Thomas Jefferson spent part of nearly each day of his adult life penning notes, memoranda, and letters to correspondents in this country and abroad. The letters numbered in the tens of thousands. His meticulously kept memorandum books recorded financial dealings, weather, and miscellaneous events over a sixty-year period. Yet, the Founding Father wrote only one full-length book, Notes on the State of Virginia, a book he neither originally intended to write, nor when completed, to publish widely or even under his own name. It was, in a manner of speaking, a “cultural accident.”[1] Still, this accidental creation has been called the “best single statement of Jefferson’s principles, the best reflection of his wide-ranging tastes and talents.”[2]

Yet Jefferson’s work was not without controversy. Historian William Peden writes:

In the Notes on Virginia Jefferson at one time or another criticizes most of the vested interests of his time. He attacks the assumptions and usurpation of power by the rich, the powerful, and the well born; the tyranny of the church; the dogmas of the schoolmen; the bigotry of the man on horseback; the enslavement of man by man; the injustice of racial superiority.[3]

Jefferson was well aware that some of his ideas would not sit well with his readers. He worried “whether their publication would do most harm or good.” Of particular concern were his views on slavery and the Virginia state constitution:

It is possible that in my own country these strictures might produce an irritation which would indispose the people towards the two great objects I have in view, that is the emancipation of their slaves, and the settlement of their constitution on a firmer and more permanent basis.[4]

James Madison agreed that Jefferson’s “opinions will displease their respective abettors,” but on the whole the work was “too valuable not to be made known.”[5]

Equally controversial were Jefferson's statements on religious freedom. In Query XVII: "Religion," he defended a separation of church and state, arguing that "it does me no injury for my neighbour to say there are twenty gods, or no god. It neither picks my pocket nor breaks my leg."[6] These views were to be used against him in the heated presidential campaign of 1800 when, for example, William Linn, a leading Federalist clergyman, penned a campaign pamphlet attacking Jefferson's presumed atheism and warning voters that "let my neighbor once persuade himself that there is no God, and he will soon pick my pocket, and break not only my leg but my neck."[7]

The origin of Notes was a request for information about the various American states made to members of the Continental Congress by the secretary to the French legation in Philadelphia, François Marbois. Jefferson received the request for information concerning Virginia indirectly, in late summer of 1780, from Joseph Jones, a member of the Virginia delegation to the Congress. Jones believed the thirty-seven year-old Jefferson, then governor of Virginia, the person best suited to answer the queries.[8]

Although the country was in the throes of revolution, Jefferson apparently began writing soon after receiving the list of queries, and in November reported he was busily occupied with the task.[9] However, in the ensuing months the war in Virginia took a turn for the worse, and Jefferson’s duties as governor took precedence.[10] In the spring of 1781, he experienced the loss of his young daughter, Lucy Elizabeth.

As Jefferson’s term as governor neared completion in the summer of 1781, the Virginia legislature fled west to Charlottesville in order to escape the invading British. General Cornwallis sent a detachment of dragoons under the command of Lieutenant Colonel Banastre Tarleton to chase down the legislators and, if possible, capture Governor Jefferson at Monticello. Warned of the British approach, Jefferson escaped to his Bedford County retreat at Poplar Forest in southwest Virginia. While there, he suffered a fall from a horse that curtailed his movement. During this three-to-four-week confinement at Poplar Forest, Jefferson produced much of his reply to Marbois, which he sent to the French legate in December.[11]

The manuscript sent to Marbois was not the same as that which Jefferson would later submit to a French printer in 1785. It was merely the “starting point” for what would become the final work.[12] Marbois had prepared a list of twenty-two queries, which one historian characterized as a “jumble” due to their haphazard organization.[13] Jefferson “sorted and arranged the whole under twenty-three heads, the order proceeding from the natural through the civil to the generally social and moral.”[14] By far the longest response was found in Query VI: "Productions Mineral, Vegetable and Animal." In this section Jefferson attacked the theories of the French naturalists (Voltaire, Abbé Raynal, D’Auberton, and especially Buffon), who frequently cast Jefferson’s native land in an unfavorable light, the animals and people as degenerated and small, and who in other ways were simply wrong.

Although extolling the virtues of America’s native peoples in Query XI: "Aborigines," Jefferson argues in Query XIV: "Laws" that blacks were inferior to both whites and Indians, although he recognizes the possibility that the conditions of enslavement may be responsible for what he perceives as shortcomings. His denigration of blacks in the harshest terms is the most unsettling of Jefferson’s views and has earned the most serious criticism.

In Query XIII: "Constitution" and XIV: "Laws," Jefferson develops the “central rationale of an American polity based upon charters, constitutions, and the laws of the state,“ as well as delivering his explanation of the Revolution. He continues in later sections to build on his “fundamental assertions of republicanism,” providing recommendations for education, manufacture, religion, and manners.[15]

Jefferson relied on many historical and philosophical texts, as well as reports from a host of correspondents when composing Notes. His knowledge of river systems and Indian tribes to the west, for example, was supplemented by information provided by the geographer Thomas Hutchins.[16] Descriptions of animals came from various friends, including Dr. Thomas Walker,[17] Archibald Cary,[18] and George Rogers Clark.[19] Charles Thomson produced such extensive commentary on Indians that Jefferson added it to the published Notes as an appendix.[20]

By the spring of 1784, more than two years after he replied to Marbois, the manuscript had swelled to “treble bulk.”[21] When Jefferson contacted a publisher in Philadelphia prior to this departure to France, he found the cost of publication more than he wanted to pay.[22] He took the manuscript to Paris where he contracted with Philippe Denis Pierres to print 200 copies, which he received in May of 1785.[23]

Once Notes was published, Jefferson was unsure of the next step. He wrote to James Madison asking him to read it carefully and to discuss it in confidence with "those whose judgments & information you would pay respect to: & if you think it will give no offence I will send a copy to each of the students of W. M. C. and some others to my friends & to your disposal.” Should the opinion of his American colleagues be negative, Jefferson suggested he would “burn the rest.”[24] Madison, joined by their friend George Wythe, counseled that copies be placed in the college library rather than giving them as gifts to each student. He observed that such "an indiscriminate gift might offend some narrow minded parents."[25]

In Paris, Jefferson “gave out a few copies only, and to confidential persons, writing in every copy a restraint against it’s publication.”[26] Nevertheless, a copy fell into the hands of a bookseller who, according to Jefferson, “employed a hireling translator and was about publishing it in the most injurious form possible.” [27] To rescue his work, Jefferson entered into an agreement for the translation into French with the highly respected writer, Abbé Morellet. Unfortunately, the author and this new translator did not see eye-to-eye. Dorothy Medlin writes:

Apparently Jefferson did not realize that he and Morellet had very different attitudes toward translation. In Jefferson’s opinion, a good translation was a strictly literal rendering of the original text ... In Morellet’s opinion, the translator was an active collaborator in the dissemination of liberal ideas to a reading public, which appreciated classical order, clarity, and stylistic elegance.[28]

Consequently, when Jefferson saw the completed work, he was seriously displeased with the translation.[29]

Jefferson then turned to the English publisher John Stockdale, to whom he promised to send a corrected copy if “you chuse to print the work.” [30] Stockdale agreed to print Notes, although not before stating, “I know there is some bitter Pills relative to our Country.” [31] On August 14, 1787, Jefferson wrote to Stockdale that he had received the initial copies.[32]

The bibliographer, Coolie Verner, tracked the distribution of the original Stockdale edition and noted the various modifications made by Jefferson and others on these copies. Notes appeared in some nineteen editions during Jefferson's lifetime (and not always with his knowledge).[33] In 1788 the first American edition was published in Philadelphia “from a pirate copy of the Stockdale edition.”[34]

Jefferson made numerous corrections and changes in his personal copy with every intention of eventually revising his work.[35] Nevertheless, by 1810 he considered a revision “impracticable,” suggesting the additional forty years engaged “in the affairs of mankind would lead me into dilations ending I know not where.” However, he did make clear “that experience indeed has not altered a single principle.”[36] His personal, annotated copy became part of his estate and with permission of his executor, Thomas Jefferson Randolph, an edition was published in Richmond in 1853 incorporating Jefferson's notes and corrections.[37]

The task of revision would be left to another generation. Jefferson judged his work as “nothing more than the measure of a shadow, never stationary, but lengthening as the sun advances, and to be taken anew from hour to hour. it must remain therefore for some other hand to sketch it's appearance at another epoch.”[38]