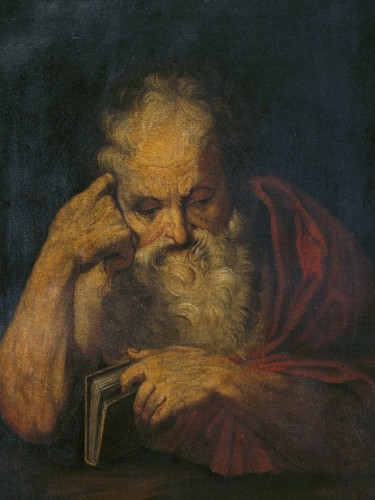 Historical Notes: Saint Jerome was the best known Christian scholar of the fourth century. He translated the Bible into Latin, then the lingua franca of the literate. At Monticello Jefferson placed Saint Jerome in Meditation in the Entrance Hall. In his Catalogue of Paintings, Jefferson described this piece as "a bust of St. Jerom in meditation, his head reclined on his right hand, and a book in his left. of full size, on Canvas. Copied from Goltzius."[1]

Goltzius, a Dutch artist of German ancestry, is chiefly known as an outstanding engraver, who, in addition to his own work, successfully imitated the styles of Dürer and Lucas van Leyden and other Old Masters. He traveled to Rome in 1590, thus coming into contact with the work of Michelangelo and Raphael. Goltzius turned to painting after his return from Rome. Although some of his work was in Parisian collections in the late eighteenth century, it is not known with certainty if Jefferson's painting was copied from a painting or engraving. The painting bears some resemblance to an engraving of St. Jerome (1596) by Goltzius based on a drawing by Jacopo Palma il Giovane.[2]