Seal of the United States

The Second Continental Congress appointed a committee on July 4, 1776, the day the Declaration of Independence was adopted, to select a design for a United States seal. The original committee members were John Adams, Benjamin Franklin, and Thomas Jefferson. The committee submitted its recommendation on August 20, 1776, but Congress delayed its approval for 6 years, during which time it appointed two additional committees. The seal as proposed by Adams, Franklin, and Jefferson changed considerably in the intervening years. 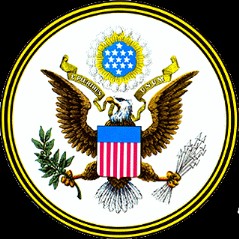 Adams favored the figure of Hercules, contemplating images of Virtue and Sloth, but admitted this was "too complicated a group for a seal or medal, and it is not original."[1]

Franklin produced a biblical scheme: "Moses standing on the Shore, and extending his Hand over the Sea, thereby causing the same to overwhelm Pharoah who is sitting in an open Chariot, a Crown on his Head and a Sword in his hand. Rays from a Pillar of Fire in the Clouds reaching to Moses, to express that he acts by Command of the Deity."[2]

Jefferson's ideas were similar to Franklin's. But in addition to the emblem of Moses and Pharaoh, Jefferson proposed, on the reverse, "Hengist and Horsa, the Saxon chiefs from whom we claim the honor of being descended, and whose political principles and form of government we have assumed."[3]

In addition to their individual submissions, the three members of the committee also asked the Philadelphia artist Pierre Eugène du Simitière for a design. Du Simitière responded with a shield consisting of the traditional symbols of the six European nations that had settled North America. The shield was surrounded by thirteen shields representing the states and flanked by the goddess of liberty and an American rifleman. It also bore the eye of Providence and the motto "E Pluribus Unum."

The committee's final proposal consisted of thirteen linked shields, each bearing the designation of a state and the motto "E Pluribus Unum"; the date MDCCLXXVI; and Providence's eye within a triangle. On the reverse were the biblical scene and the motto "Rebellion to tyrants is obedience to god." Congress, however, tabled the subject, and Jefferson's direct role came to an end. 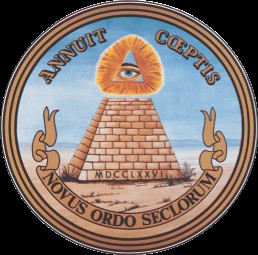 New committees took up the matter in 1780 and 1782. Suffice it to say that goddesses, shields, stars, Roman soldiers, Indian warriors, and mottoes came and went. The final result was principally the work of Charles Thomson, a member of the new committee, and William Barton, a Philadelphia lawyer with a knowledge of heraldry. Barton's design was similar to du Simitière's: a central shield flanked by the maiden America and a knight in armor. For the reverse, he proposed a pyramid topped by the eye of God. The knight was replaced by a Continental officer, and then both figures were replaced by an eagle. Thomson is given credit for these simplifications and improvements.

Jefferson thus had nothing to do with the selection of the eagle. His committee, however, did contribute several elements that were incorporated into the seal: the eye of Providence, the date, the shield, and "E Pluribus Unum."

Writing to his daughter in 1784, Franklin offers wry comments on the Society of the Cincinnati. He finds their newly-minted medals "tolerably done," but notes that "all such things are criticis'd," some faulting the Latin, the title, or the bald eagle. "For my own part," he adds, "I wish the Bald Eagle had not been chosen as the Representative of our Country; he is a Bird of bad moral Character." Franklin was in fact pleased that the eagle on the Cincinnati medals looked more like a turkey, since "the turk'y is in comparison a much more respectable Bird, and withal a true original Native of America." Though "a little vain and silly," the turkey remains "a Bird of Courage," who would quickly attack any British grenadier "who should presume to invade the Farm Yard with a red coat on."[4] As for Jefferson, no such evidence of a strong preference towards either the turkey or the eagle has been found.