Sir Benjamin Thompson, Graf (Count) von Rumford (March 26, 1753 – August 21, 1814) was an American-born scientist and inventor. Thomas Jefferson was familiar with Rumford and his work, and some of his innovations were incorporated into the remodeling of Monticello.

By 1796, when Rumford was first mentioned in Jefferson’s papers, Rumford had already had a very eventful life. Born in Massachusetts in 1753, he departed for England in 1776 and served in the British army during the American Revolution. He was made a Fellow of the Royal Society and knighted by King George III before moving on to the Continent, where he found patronage with the elector of Bavaria, Karl Theodor. In 1790, he was granted the title of graf (count) of the Holy Roman Empire.

The work for which Rumford is perhaps best known today is his energy-efficient design for fireplaces. His essay "Chimney Fireplaces, with Proposals for Improving them to Save Fuel; to Render Dwelling-houses more Comfortable and Salubrious, and Effectually to prevent Chimneys from Smoking" was first published in 1796, in the Bibliotheque Britannique in Geneva, and in volume I of his Essays, Political, Economical and Philosophical, published in London. An American edition of the Essays was published in 1798.[1] 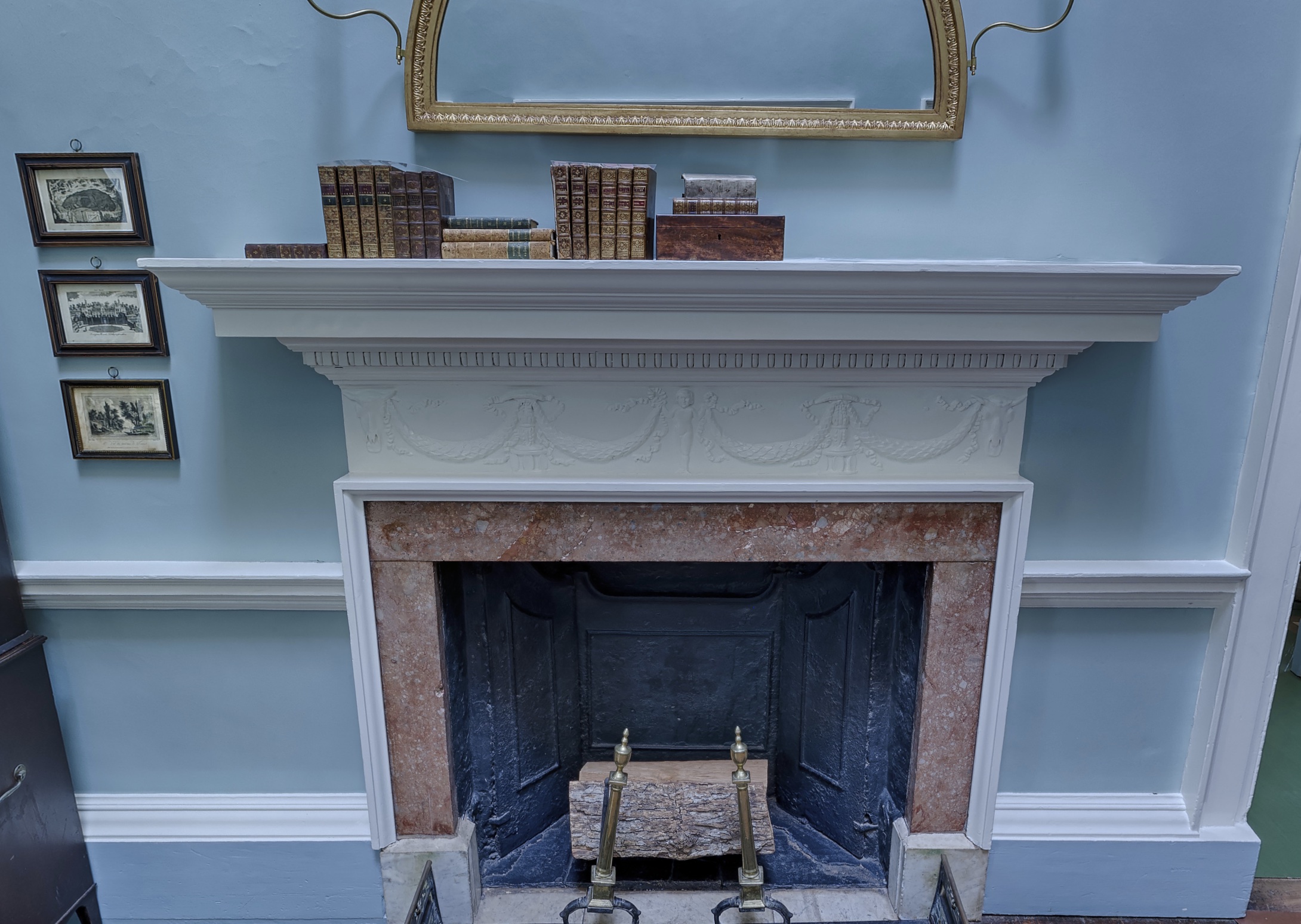 A Rumford-design fireplace in Jefferson's Bedchamber

However, it seems that Jefferson was familiar with Rumford’s designs well before 1798. Jefferson’s remodeling notes for Monticello, begun in November of 1796, contain sketches and notes for “Count Rumford’s fire places in the square rooms”;[3] another “Design for Chimney and Flues,” externally dated to 1797, also contains drawings and notes for a Rumford-style fireplace.[4] In 1799, he replied to his friend Wilson Cary Nicholas's request for the dimensions of Rumford fireplaces:

Mr. P. Carr informed me two days ago that you wished for the dimensions of the Rumford fireplaces. I therefore avail myself of the first post to send them. I state them as I have used them myself, with great satisfaction, the back one half of the opening. Count Rumford makes the back but one third of the opening. this was to accomodate them to coal; but it renders them impracticable for wood. my larger fireplaces I make 2. f. in the back & 4. f. in front; those for bed-rooms 19½ I. in back & 3 f. 3. I. in front. the opening of the former 3. f 3. I. or 3. f. 6. I. high the latter 3. f. high.[5]

Only a single letter between Rumford and Jefferson is known to exist. In 1800, Rumford wrote on behalf of the Royal Institution of Great Britain to Jefferson, in his capacity as president of the American Philosophical Society, offering the APS a copy of the Royal Institution’s recent publication, The Prospectus, Charter, Ordinances and Bye-Laws of the Royal Institution of Great Britain: Together with Lists of Proprietors and Subscribers. Rumford also conveyed to the APS the Royal Institution’s desire “to cultivate a friendly Correspondence with them, and to cooperate with them in all things that may contribute to the Advancement of Science, and to the general Diffusion of the Knowledge of such new and useful Discoveries, and mechanical Improvements, as may tend to increase the Enjoyments, and promote the Industry, Happiness, and Prosperity of Mankind.”[6]  Jefferson never replied directly to this letter; he forwarded it, along with the enclosed publication, to Caspar Wistar, commenting that “the application of science to objects immediately useful in life, which seems to be the principal end of this establishment must interest in it’s favor every friend of human happiness, & I have no doubt the society will meet with cordiality the overture made them, and add their example to the many existing proofs that the votaries of science, however widely dispersed, however separated by religion, by allegiance or vocation, form but one family.”[7]

Although they never met in person or corresponded to any degree, Jefferson certainly seemed to have an appreciation for Rumford’s practical designs, and apparently had some degree of personal respect for him. In Jefferson’s “Catalogue of Paintings &c. at Monticello” (c. 1809-1815), he listed a print of Count Rumford, in the lower tier of the Parlour, alongside prints of Thomas Paine and Thaddeus Kosciuszko.[8]