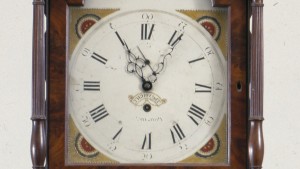 Eclipses come and go, but these marvels of nature always draw attention from astronomers — both professional and amateur — across the globe. In this episode, Monticello guide Kyle Chattleton explores the stories of two eclipses that occurred during Thomas Jefferson's lifetime, and how both point to his pursuit of scientific knowledge.

Historical Notes: Jefferson wanted an accurate clock for use in making astronomical observations from the time he had observed an eclipse of the moon in 1778. He then ordered a clock from the scientist and inventor David Rittenhouse. The Revolutionary War left Rittenhouse little time to work on Jefferson's clock, and the project was forgotten. Jefferson's desire for an astronomical clock was renewed more than thirty years later, when he expressed his regret at not having an accurate timepiece to use during the annular eclipse in 1811.1 In September of that year, Jefferson asked his friend, Robert Patterson, a Philadelphia mathematician and director of the United States Mint, for his recommendations on clocks available to that city:

I extremely regret the not being provided with a time piece equal to the observation of the approaching eclipse of the sun. can you tell me what would be the cost in Philadelphia of a clock, the time-keeping part of which should be perfect? and what the difference of cost between a wooden & gridiron pendulum? to be of course without a striking apparatus, as it would be wanted for astronomical purposes only.2 Patterson recommended the Philadelphian Thomas Voight (also spelled "Voigt"), a young "ingenious artist" who would make a clock for sixty-five dollars.3 Jefferson knew and patronized Voight's father Henry, a clock and watchmaker who was also the chief coiner at the United States Mint.

With Patterson's recommendation and firsthand knowledge of the capability of Voight's father, Jefferson gave Thomas Voight the commission. He specified that the clock should be "as good as hands can make it, in every thing useful; but no unnecessary labour to be spent on mere ornament. a plain, but neat mahogany case will be preferred."4 Voight completed the timepiece by the end of 1812, but shipping complications caused by the War of 1812 delayed the clock's arrival at Monticello until December 1815.5

The final cost for the clock was $115.50 — almost double Voight's estimate. The clock is a masterpiece, although more ornamented than Jefferson had requested. Its dial, decorated with gilt and black lunettes, is surmounted by a festooned medallion. The clock's hood is supported by freestanding reeded columns and topped by a scrolled, broken pediment. Reeded pilasters flank oval veneer reserves on the clock's trunk and base. This veneering added to the cost of the clock, as it required repair even before the clock was shipped to Jefferson.

Jefferson placed the eight-day clock in his private suite of rooms. It has no striking mechanism and operates with a single weight. Jefferson marked the inside of the clock's case with the days of the week, so that as the weight dropped it would indicate the passing of the days, just as the wall in the Entrance Hall is marked with the days for the weights of the Great Clock.

After Jefferson's death, his granddaughter Ellen Coolidge wanted to purchase the clock because it was one of the objects that Jefferson "habitually used in his chamber."6  Jefferson's daughter Martha, however, had already decided that she wanted to present the clock to the physician Robley Dunglison, who had faithfully attended Jefferson during his final illness.7 Jefferson had recruited Dunglison, who was born and educated in England, to be professor of medicine at the University of Virginia.

Three persons bid on the clock at the sale of Jefferson's estate in 1827: Jefferson's grandson-in-law Nicholas Trist, John Hartwell Cocke (who purchased another clock), and Robley Dunglison. Trist, who was bidding on Martha's behalf, prevailed against Dunglison's unwitting bids. Dunglison recalled the event in his diary:

I had no knowledge of the intention of Mrs. Randolph to bestow this clock on me; but had determined to possess it, if it went at a reasonable rate, at the sale. ... General Cocke, of Fluvanna, bade, I think, 145 dollars. I bade 150; and it was knocked down to Mr. Trist for one hundred and fifty-five dollars. I immediately went up to Mr. Trist, apologizing for having opposed unwittingly the desire of the family to possess the clock, when he told me I might make my mind easy, as he had been commissioned by them to buy it, in order that they might present it to me.8

Dunglison left his post at the University in 1833 and began teaching at Jefferson Medical College in Philadelphia in 1835. His son presented the clock to the Historical Society of Pennsylvania in 1894.