Journey through France and Italy (1787)

"I am just setting out on a journey of three months to the South of France." – Thomas Jefferson to Elizabeth House Trist, February 23, 17871 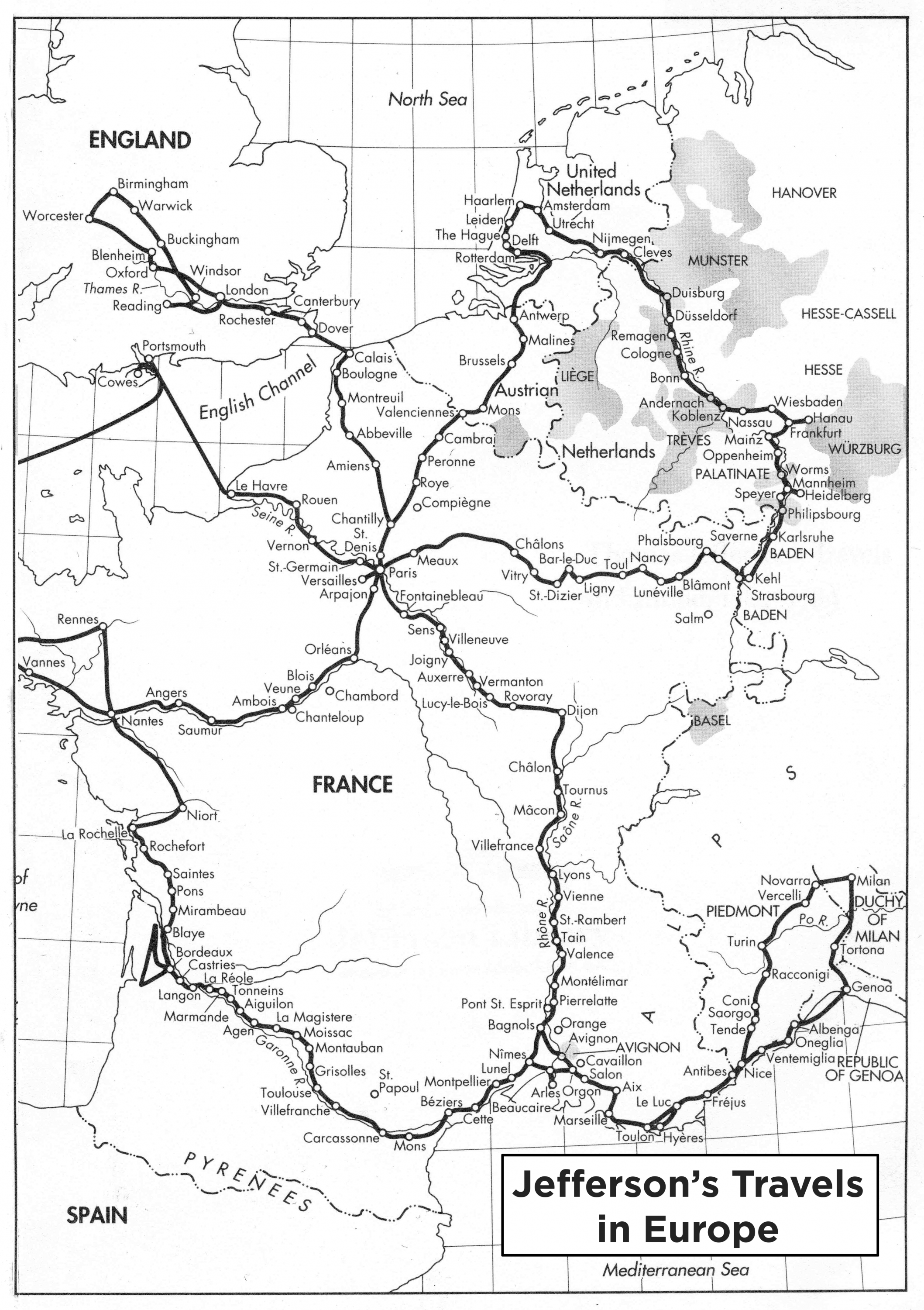 On February 28, 1787, the forty-four-year-old Thomas Jefferson left Paris for a three month, twelve-hundred-mile journey to southern France and northern Italy. A trip scheduled five months earlier was postponed after he injured his right wrist, and his subsequent itinerary was changed to include the south of France, at the advice of his surgeon. Jefferson wrote: "I am now about setting out on a journey to the South of France, one object of which is to try the mineral waters there for the restoration of my hand, but another is to visit all the seaports where we have trade, and to hunt up all the inconveniencies under which it labours, in order to get them rectified. I shall visit and carefully examine too the Canal of Languedoc."2

Traveling as a private citizen from Virginia, not as a diplomat, Thomas Jefferson paid his own way, and none of his Paris servants went with him. Preferring to travel alone and anonymously, he chose to hire valets in each town. In Dijon, he made an exception, and hired Petit Jean, who stayed with him the entire trip.3 "I was alone thro the whole, and think one travels more usefully when they travel alone, because they reflect more."4

Jefferson traveled in his own carriage drawn by post horses. Every ten miles at a post house, he paid for another postilion and fresh horses. He used three horses until he got to Lyon, and after that time he had four or five.5 The carriage required frequent wheel repairs.

In Champagne, Burgundy, Beaujolais, and Bordeaux, Jefferson compared red and white wines, the soils in which they were cultivated, how well the wines withstood transport, and prices. He wrote in depth about the planting and pruning of the vines. Continuing his agricultural investigation into the north of Italy, he observed techniques used in the growing of rice.6 "[T]he greatest service which can be rendered any country is to add an useful plant to it’s culture," he wrote in 1800 in a list of contributions he had made to his country. On that list he also mentioned having "had a great number of olive plants of the best kind sent from Marseilles to Charleston for S. Carola & Georgia."7 In Italy, he made arrangements to smuggle a sack of "rough rice" out of the country, despite noting that it was punishable by "death to export it in that form."8

In his journal, "Notes of a Tour into the Southern Parts of France, &c.," and in his letters, he wrote in detail about the people he met in each area. "[Y]ou must ferret the people out of their hovels as I have done, look into their kettles, eat their bread, loll on their beds under pretence of resting yourself, but in fact to find if they are soft. You will feel a sublime pleasure in the course of this investigation ...."9

"Architecture, painting, sculpture, antiquities, agriculture, the condition of the labouring poor fill all my moments," he wrote to William Short.10 At Nîmes he visited the Maison Carrée, the Roman temple he so admired and chose as the model for the Virginia state capitol. He also visited the Pont du Gard, part of an aqueduct constructed in 19 B.C.11

When he reached Aix-en-Provence Jefferson noted that "the temperature of the mineral waters of Aix is 90.° of Farenheit’s thermometer at the spout."12 Apparently the waters did little to ease the discomfort in his injured wrist, however; he later wrote that he had "taken 40. douches, without any sensible benefit."13 Smitten by the sunshine in Aix, he wrote to William Short: "I am now in the land of corn, wine, oil, and sunshine. What more can man ask of heaven? If I should happen to die at Paris I will beg of you to send me here, and have me exposed to the sun. I am sure it will bring me to life again."14

The Canal of Languedoc (today known as the Canal du Midi) was of great interest to Jefferson. This waterway, dating to the seventeenth century, united the Mediterranean with the Atlantic Ocean. He wrote to William Short: "I have passed through the Canal from it’s entrance into the mediterranean at Cette to this place, and shall be immediately at Toulouse, in the whole 200 American miles, by water; having employed in examining all it’s details nine days, one of which was spent in making a tour of 40 miles on horseback, among the Montagnes noires, to see the manner in which water has been collected to supply the canal; the other eight on the canal itself. I dismounted my carriage from it’s wheels, placed it on the deck of a light bark, and was thus towed on the canal instead of the post road. That I might be perfectly master of all the delays necessary, I hired a bark to myself by the day, and have made from 20. to 35 miles a day, according to circumstances, always sleeping ashore. Of all the methods of travelling I have ever tried this is the pleasantest. I walk the greater part of the way along the banks of the canal, level, and lined with a double row of trees which furnish shade. When fatigued I take seat in my carriage where, as much at ease as if in my study, I read, write, or observe."15

Jefferson began traveling again in his carriage on May 22, 1787. He reached Bordeaux late on May 24, 1787, and stayed at the Hôtel Richelieu where he enjoyed fresh cherries, peas, and strawberries. On May 28 he ferried across the Garonne and stayed in Blaye overnight. The next day he traveled the northwest route to La Rochelle. From La Rochelle he went to Nantes, and on June 1, 1787, he left Nantes and made his way to the north shore of the Loire. By June 6 he arrived at Aucenis; he changed horses but didn’t visit the sites of the town and continued on to the north bank of the Loire. At Amboise he did some sightseeing and had carriage repairs. By June 10, he reached Paris after being away more than three months.

Below is an itinerary of the places Jefferson visited during his journey through southern France and Italy, including some of his observations.  Villages and towns that Jefferson noted traveling through or staying at are in italics, exactly as Jefferson spelled them.  Modern versions of place names are in brackets.

28 February-2 March: Paris, Villeneuve, St. Lieu, Melun, Fontainebleau.  Jefferson left Paris on February 28 and traveled as far as Fontainebleau, where he was delayed for two days because of problems with the wheels of his carriage.

2 March: Moret, Faussard, Villeneuve, Pont sur Yonne, Sens. At Sens he noted paying to see its cathedral and climbed to the top of the cathedral’s tower to see the town’s buildings.17

3 March: Villeneuve le roy, Villevallier, Joigny, Bassou, Auxerre, St. Bris, Vermanton. In his notes, Jefferson recorded: "The soil is generally a rich mulatto loam .... The plains are in corn, the hills in vineyard, but the wine not good. ... a few apple trees .... No cattle, sheep, or swine. Fine mules."18

4 March: Lucy le bois, Cussy les forges, Rouvray, Maison neuve, Vitteaux, La Chaleure, Pont de Panis, la Cude, Dijon (Hotel de Condé). "The soil a good red loam …. All in corn. Some forest wood here and there …. Now and then a flock of sheep. … The people are well clothed, but it is Sunday. … Dijon. … The best round potatoes here I ever saw."19

9 March: St. Albin, Macon, Maison blanche, St. George de Renan, Chateau de Laye Epinaye. "The vineyards are inclosed with dry stone walls …. The cattle are few and indifferent. ... some good oxen …. Few sheep …. A good deal of wood lands. … Beaujolois. … Here, as in Burgundy, the cattle are all white. This is the richest country I ever beheld. … The wild gooseberry is in leaf, the wild pear and sweet briar in bud."21

15 March: St. fond, St. Symphorin, Vienne. "The Rhone makes extensive plains …. The high lands are often very level. —The soil … is generally tinged, more or less, with red. ... In the neighborhood of Lyons there is more corn than wine .... the Plains ... are in corn, clover, almonds, mulberries, walnuts. ... the hills are in vines."23

19 March:  Pont St. Esprit, Bagnol [Bagnols], Connault [Connaux], Valignieres [Valliguières], Remoulins, St. Gervasy, Nismes [Nîmes]. "The hills are rocky. ... The culture is corn, clover, St. foin, olives, vines, mulberries, willow, and some almonds."25 At Nîmes his enthusiasm for seeing, for the first time, the Maison Carrée, the building design he chose for the Virginia state capitol in Richmond, is seen in a letter he wrote to Madame de Tessé: "Here I am, madam, gazing whole hours at the Maison quarrée, like a lover at his mistress. … From Lyons to Nismes I have been nourished with the remains of Roman grandeur."26 At Remoulins, Jefferson stopped long enough to see the Pont du Gard.27

24 March: Arles, Terrascon [Tarascon], St. Remis [Saint-Rémy]. "At an antient church in the suburbs of Arles are perhaps some hundreds of antient stone coffins along the road side. … But the principal monument here is an Amphitheatre, the external portico of which is tolerably compleat."28

29 March: Marseilles. Jefferson spent a week at the Hôtel des Princes in Marseilles. On April 2, Jefferson noted that he visited the Château d'If, a local fortress being used as a prison, situated on an island just offshore; on April 5, he paid to see the pumps at "Chateau de Borelli" [Château Borély].29

21-22 April: Milan. "—Among a great many houses painted al fresco, the Casa Roma and Casa Candiani by Appiani, and casa Belgioiosa by Martin are superior."31

23 April:  Casino, Rozzano, Binasco, Pavia (al Croce bianco). "It is supposed [Parmesan cheese] was formerly made at Parma, and took it’s name thence, but none is made there now. It is made thro all the country extending from Milan 150. miles."32

by Anna Berkes
Maybe we don’t have Jefferson’s actual letters here at the Jefferson Library, but we have other cool stuff – oh yes we do! One perhaps less showy-cool but nonetheless important sort of thing we have... END_OF_DOCUMENT_TOKEN_TO_BE_REPLACED