Thomas Jefferson spent most of his adult life designing and redesigning Monticello, which was constructed over a period of forty years. He said, "Architecture is my delight, and putting up, and pulling down, one of my favorite amusements."

Jefferson inherited sizable property in Albemarle County, Virginia, from his father, Peter Jefferson, who along with Joshua Fry created the most accurate map of Virginia of their time. In May 1768, the twenty-five-year-old Thomas Jefferson directed the leveling of the already gentle top of a 868-foot-high mountain, where he intended to build his home. He called it Monticello, which means "little mountain" in old Italian. 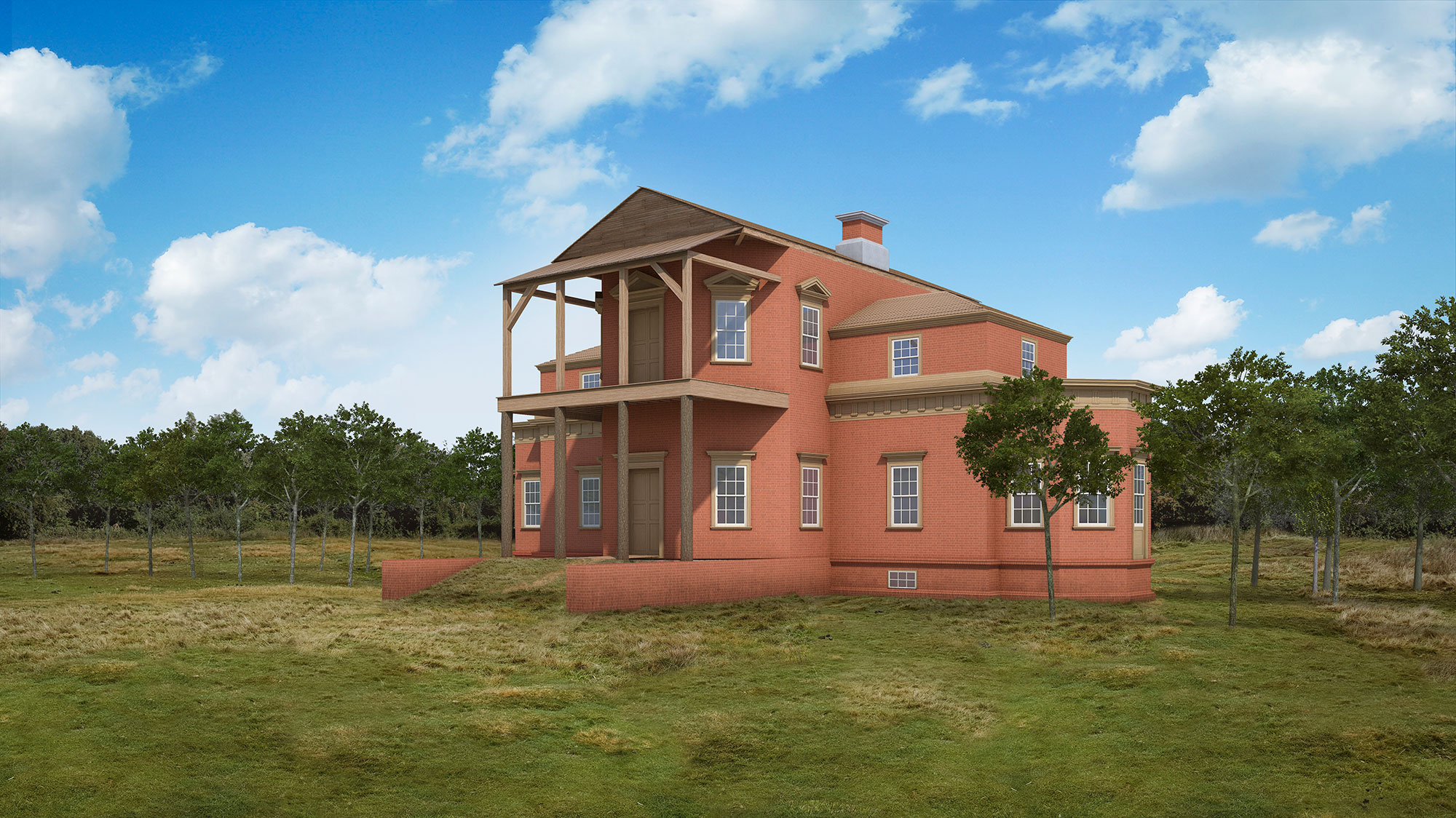 As early as 1790, Jefferson began planning revisions for his Albemarle County home, based in part on what he had observed in France. In 1796, walls of the original home were knocked down to make room for an expansion that would essentially double the floorplan of the house. The new plan called for a hallway connecting the older rooms to a new set of rooms on the east. The second Monticello was largely completed in 1809, the year Jefferson retired from the Presidency. 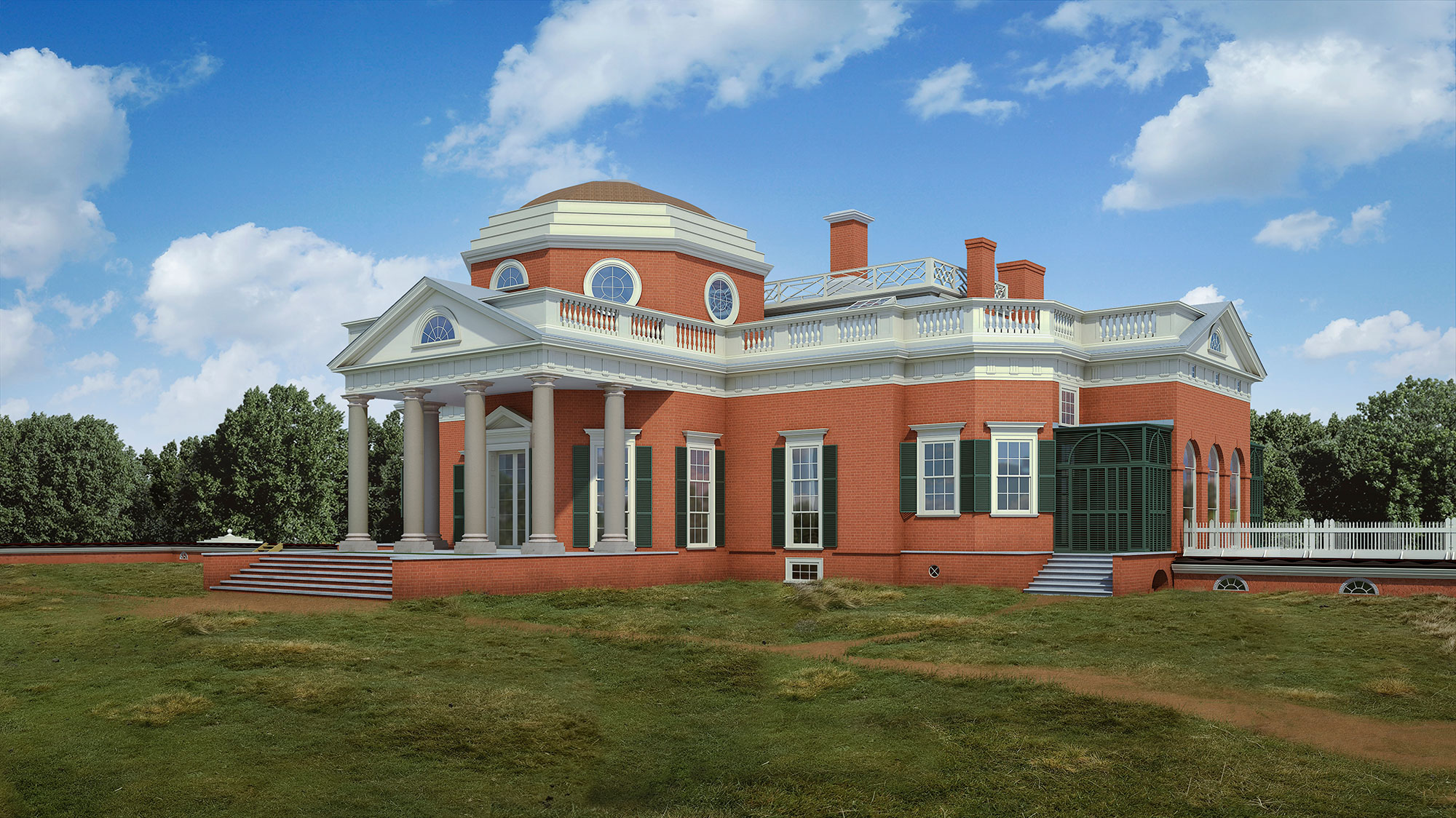 Among the many French elements that Jefferson incorporated into the second Monticello, the most dramatic was the dome placed over the already-existing Parlor, making it the first American home with such a feature. He crafted the building to give the appearance -- as he had seen at the Hotel de Salm -- that the three-story building was only one story tall. To achieve this effect, windows in the second-story bedrooms are on the floor level, so that from the outside, they appear to be an extension of the first-floor windows. On the third floor, light is provided by skylights invisible from the ground. Alcove beds and indoor privies are two more French features incorporated into Monticello. Although he was referring to food, one can understand why Patrick Henry claimed that Jefferson's time abroad had "Frenchified" him.

Jefferson's revisions for the home called for even smaller stairways than he had used in the original design. Two steep and narrow stairways, measuring only twenty-four inches wide, provided access to the upper bedrooms. These stairways widen to thirty inches as they descend to the basement level, thus affording more space for tasks such as bringing food from the Kitchen to the Dining Room. Jefferson believed that small stairways saved both money and "space that would make a good room in every story."

Jefferson called Monticello his "essay in architecture," and construction continued on the mountaintop well into his retirement. In 1809 -- forty years after work began on Monticello -- his workers completed the basement-level dependencies, such as the kitchen, smokehouse, and storage rooms. The final product is a unique blend of beauty and function that combines the best elements of the ancient and old worlds with a fresh American perspective. In 1782, the marquis de Chastellux visited the "first" Monticello and wrote a brief description of it for his Travels in North-America:

My object in giving these details is not to describe the house, but to prove that it resembles none of the others seen in this country; so that it may be said that Mr. Jefferson is the first American who has consulted the Fine Arts to know how he should shelter himself from the weather.