Thomas Jefferson was fascinated by astronomy and owned several astronomical instruments during his lifetime, including an orrery—that is, a mechanical model of the solar system. Orreries were a popular, entertaining, and instructive way to share what was known at the time about the natural world and universe. According to one letter, Jefferson may have even displayed his orrery, ordered from London in 1792, in the President’s House in Washington, D.C.

James Ferguson, 1710-1776, was a sort of “Bill Nye the Science Guy” of the middle to late 1700s. A fellow of the Royal Society, he had done important work in observing and understanding the moon’s orbit, but his true calling turned out to be explaining science to the general public. Some of his works still make good reading today. He strove for simple, elegant solutions and didn’t waste words. Perhaps he put it best in “Select Mechanical Exercises”:

“The simpler that any machine is, the better it will be allowed to be, by every man of science.”

Thomas Jefferson greatly admired him. In 1769 he wrote John Walker of a rumor that Ferguson might journey from England to teach at William and Mary, following the departure of his favorite teacher William Small.

“P.S. That most famous Ferguson, who wrote on astronomy, will come, it is said, to the College of William and Mary, an excellent successor to the most excellent Small!”

Jefferson wrote the original in Latin... 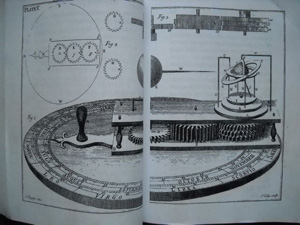 Ferguson was especially adept at designing orreries, mechanical models of the solar system in whole or in part. The work of Isaac Newton and others had recently demonstrated that the workings of the solar system could be more thoroughly understood. And once better understood, people like Ferguson could translate such workings into combinations of small gears and miniature planets that would replicate celestial movements on your desktop. Heady stuff for its time, and still fascinating today. 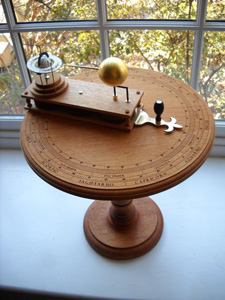 We know Jefferson (a great lover of desktop appliances!)  owned at least one orrery constructed by William and Samuel Jones of London, and may even have owned a second. In the sort of owner’s manual for the orrery that Jefferson purchased, the Jones brothers cite Ferguson as their inspiration: “Part of the orrery described in the following pages is constructed nearly upon the the principle of those contrived by the late ingenious Mr. Ferguson...”

Though Ferguson designed several orreries, it seems likely they were referring to Ferguson’s Mechanical Paradox Orrery, so named because of its curious mechanism. In his original version, Ferguson made all gears the same diameter, yet they turned at different rates because of their different numbers of teeth - a seeming paradox if you weren’t up on the importance of tooth count.

The Jones brothers used some of Ferguson’s basic gearing to stabilize the earth’s axis in relation to the sun. Jefferson would have been aware of this as he also owned Ferguson’s article describing the Paradox. 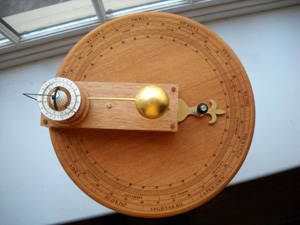 Fast forward to now. It would be wonderful to let each and every visitor spend about three hours in Jefferson’s cabinet or study, using things like the orrery and even dashing off a letter or two on his polygraph, but of course it’s not possible for a host of reasons. Just one of them being that a number of items probably wouldn’t last the day, to say nothing of priceless, irreplaceable, you name it.

But what if we could create schematic replicas of some items... What if we could replicate the paradox orrery and somehow let visitors have a try at using it?  Once again, the small gears and a miniature earth would revolve around the sun on a desktop:  something old, and something new. 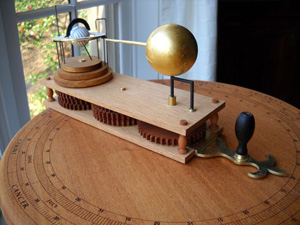 This project is one answer to the question what if?  I learned a whole lot during its construction, but the most terrific thing I learned was this: that even medium technology of the 1760s was not nearly so simplistic as I had once thought. It can still rock your world. For example, I used to think the earth wobbled on its axis and that’s why we have seasons.

Ferguson showed me it doesn’t work that way.

I used to think the moon stayed the same distance from the earth.

Ferguson showed me I was wrong on that one too.

I used to think the moon’s orbit was a simple thing and always stayed about the same in relation to the earth. 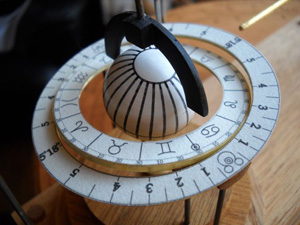 All of this left me wondering how to thank someone who has been dead for a few hundred years - something that tends to happen quite a bit around here. For me anyway, the answer is to keep on going, to keep on learning, and to keep on making. Some people can learn from simply reading about something. For me it helps to make it, hack it, and see how it runs backwards. 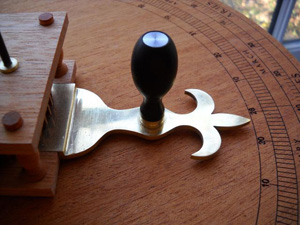 It remains to be seen exactly how this might fit in at Monticello. I originally constructed it for use in the house on tours for children and their families. It is, however, much too large and fragile for such a use. Imagine carrying a six foot slab of marble with you to make a point about sculpture...

Yet anyone who chips away at a block of marble for a year or so will probably know something more about it. Perhaps that point about sculpture would then also come from the hands and somewhere else very different. 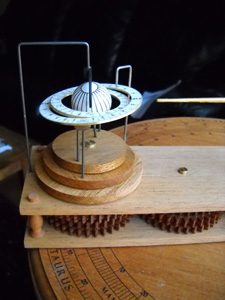 Many thanks to everyone. Ferguson's orrery started out as a one-person project with encouragement from Susan Stein, Monticello's head curator, and ultimately became an effort helped by a wonderfully diverse group at different times over a year.  Danielle Willkens, a fellow guide and also a lecturer at the University of Virginia, laser engraved the dial at the UVA School of Architecture using a .dxf file from clockmaker Clayton Boyer. Boyer’s plans for his version of Ferguson’s work often aided though I used Ferguson’s construction details instead. Michael Kippers, a fellow woodworker at Gaston and Wyatt, turned the pedestal. Shea Aulie, a friend and CAD person, resized and printed the dials to fit the machined brass rings. Another woodworker and friend, Paul Pyzyna, gilded the sun.  Anna Berkes and Endrina Tay at the Thomas Jefferson Library helped enormously. Linnea Grim and Rachel Baum both listened and encouraged.