When you see Bill Barker portray Thomas Jefferson, it's easy to believe you're in the presence of the genuine article. That's because, after honing his interpretation and understanding of Jefferson over four decades, Barker has become a true master of his craft.

He first portrayed Jefferson at Philadelphia's Independence Hall in 1981, and has since performed at sites including the White House, the U.S. Capitol and the Palace of Versailles. He's been featured in numerous national publications and on every major broadcast television network. Most recently, he portrayed Jefferson at Colonial Williamsburg for 26 years, and now, Barker has joined Monticello full-time.

We spoke with Barker about his distinguished career and his thoughts on coming home to Monticello.

MONTICELLO MAGAZINE: What first sparked your interest in Thomas Jefferson? 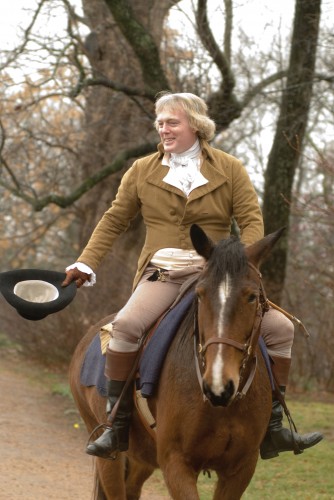 In 2009, Barker rode up the mountain to reenact Jefferson's retirement to Monticello after 40 years of public service.

BILL BARKER: I can't remember not having a love of history and a fascination with the past. Jefferson played into that at a very early age. When I visited Monticello as a child, I remember walking through the house wondering, "Who is this guy?" I was just struck with curiosity about everything: the Indian Hall, the antlers, the clock, the louvered doors, where that narrow staircase led. I see this all the time with young children, and these were the same fascinations that my brothers and I had as kids. I will never forget one of my first trips here with my family when I was 6 or 7 years old. As we completed our visit, it was commencing to storm, but my mother wanted to stop and see the cemetery before we left. It started pouring rain, and my mother grabbed me and pulled me over to the graveyard. That scene is still in my mind — I recall looking at the tombstone and thinking, "So this is where he is." And my mother said, "Well, this is where all that mortally remains of him is. But his spirit is still all around." At a young age, that's provocative and profound.

How did you get started in this line of work?

I was a history major in college, and I couldn't stay off the stage. I loved it, particularly history plays. Soon I became a professional actor in Philadelphia. At the time, I was tall and gangly, and had long red hair. I particularly enjoyed doing Shakespeare plays. In 1981, a friend of mine, a teacher who moonlighted as William Penn, came up to me one day and said, "Barker, did anyone ever tell you that you look like Jefferson?" He told me that they needed someone to portray Jefferson at Independence Hall for photo ops. Independence Hall was a "real set," and that created an almost immediate sense of responsibility to get it right—this wasn't papier-mâché, cardboard or canvas. Portraying Jefferson was different from being in a play because it was spontaneous, it was immediate, it was a conversation. Within one or two appearances, questions would come, and I knew I had to be on target with my answers. In 2009, Barker rode up the mountain to reenact Jefferson's return to Monticello after 40 years of public service. So I continued to read more. I began to realize that this was something very different from pure theater. When you talk about the playwright's page, in this persona, what better script than Jefferson's letters? He leaves us with not only his public papers, but well over 22,000 letters, and I'll never exhaust them. 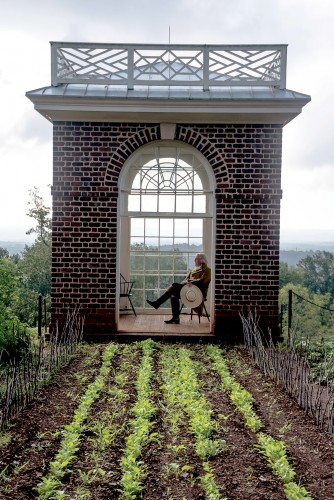 What are some of the most common questions you're asked?After more than 25 years portraying Jefferson at Colonial Williamsburg, how does it feel to "come home" to Monticello?

Ten years ago, I was invited to reenact Jefferson's 1809 return to Monticello after his 40 years of public service. I rode up the mountain on horseback, dismounted near the west portico and read the speech that Jefferson had prepared for his return. Now, after 40 years of portraying Jefferson, I also feel like I'm coming home. Monticello has always appeared to be part of what I do. There's a familiarity here. At home here in his native woods and fields, Jefferson could be straightforward and sincere about his public life. There were three subjects that could occupy him in conversation more than anything else: the years of the American Revolution, his years in France, and his years working on the University of Virginia. And that's what I find is of general interest to the people who visit here. It feels like you're amongst neighbors and friends.

I have the opportunity to answer these questions backed by our historians and experts in these fields. The Sally Hemings room is just one of the most profound experiences. It's genius on that wall—to see images appear first in black and white, then take on color. That's the way that I want to connect, to be able to bring an individual personality to life. I'm trying to help people have a better understanding of Mr. Jefferson, his flaws, his time and his vision for the Declaration, religious liberty and the necessity of a well-educated citizen body for survival of the American experiment.

What are some of the things you enjoy most about portraying Jefferson?

This man is just not boring. He is fascinating. He's provocative. He makes us think. He is so connected with every one of the foremost figures of our history, immediately before, during and after the American Revolution. He is in one of the most highly volatile presidential elections of our early history, that of 1800. What does something like that help us to better understand about where we are right now in some of our highly volatile presidential elections? There's the opportunity to help people understand that we've been here before. These things are just so relevant, and they resonate—it is just so wonderful to have conversation upon these subjects, you can almost see a little light bulb go off.

What do you hope that guests take away from their interactions with you?

I'd like to bring a sense of connecting and having a conversation with Jefferson. I try to help folks understand that Jefferson was a man of incredible vision and hope and, like all of us, had flaws and setbacks. He's very human. And I've always thought in reading Jefferson that one of the beautiful elements of his humanity is receptiveness—you feel you're in a conversation with him as you read his letters. Monticello is a UNESCO World Heritage site and I'm able to converse with people who are coming here from all over the world to learn about Jeffersonian principles. These are the founding principles of our nation, particularly those for which he wanted to be remembered—as authoring the Declaration of Independence and the Virginia Statute for Religious Freedom, which is still universally profound in so many ways, even in our own nation, and founding the University of Virginia, following further universal realms of knowledge and education. In my opinion, all of these things are pulling the world closer together. It's like Jefferson wrote in his last public letter, "all eyes are opened, or opening to the rights of man." I just love the stand that Monticello has taken to continue to speak that, breathe that, and reveal that in all of its tours.

History and Heart
First and foremost, you need to have a regard for history and the man. It requires respect to be able to enter into this individual and help him to be understood. He was considered an enigma even in his own day, let alone today. Showing the things that make Jefferson human begins with having a regard for wanting to understand him.

Act It Out
Realize that you're not writing a report on him that you're turning in for one or two professors to read. You're performing this, so you need to have theatrical knowledge. This is a theater art, and I'm essentially an actor taking on the historical costume, the historical persona and the historical sense of place. I simply take Shakespeare's advice: "The play's the thing."

Dress the Part
Costumes are part of suspending disbelief and creating a world. I still remember my first costume from all the way back in the beginning. It was a blue coat with a yellow-gold waistcoat. I've continued to have costumes made, and I enjoy walking in Jefferson's shoes and feeling that this is what he would have worn during different seasons and occasions. He has a definitive style that Gaye Wilson reveals beautifully in her book Jefferson on Display.

BARKER ON THE WISDOM OF CHILDREN

The questions are marvelous from the children because they're just so inquisitive! You welcome them into the conversation and they're ready to talk. It's just great. I speak with children just as I speak with adults, though I naturally try to tone it down a little bit so they may understand. I'm being a bit more receptive, encouraging them and talking with them, than I may need to be with adults. Children ask, "Do you have any pets?" They ask about the Declaration. "How long did it take you to write it?" Children want to know more about the house. "What about that clock?" Children want to know if I fought in the Revolution. I'll never forget when, about 15 years ago, a young girl tugged on my coat and said, "Mr. Jefferson, Ali Johnson what do you tell your brother who's going off to war in Iraq?" I was speechless at first — she's thinking that I'm Jefferson, the president. I leaned down and told her, "You want him to know that you're very proud of him, and how much it means to you and your family that he is going out to defend our nation. And that you will continue to hold him in your heart as he's in a distant land. That you look for him to return and that you're going to continue to correspond with him though he be far away, that he is really doing something that is of the highest calling." She smiled and nodded, and the family seemed to be appreciative, but what can you really say to a question like that?

Barker's typical day is below:

*For the latest details on Barker's appearances, visit monticello.org/meetjefferson. To confirm his schedule on a particular day, please call the Ticket Office at (434) 984-9800 or inquire when you arrive. His schedule is seasonal; locations and times will change throughout the year.