The Culinary Legacy of James Hemings 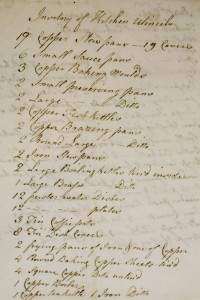 James Hemings (1765-1801) was the sixth child born to Elizabeth Hemings, an enslaved woman — her second child by her owner John Wayles. Wayles fathered six of Hemings’s children, which made them half brothers and sisters of Jefferson’s wife. In 1773, the Jeffersons inherited the Hemings family from the Wayles estate. Many of the Hemings, including James, would go on to occupy the most important household and trade positions at Monticello.

After serving as a personal attendant and barber, Hemings accompanied Jefferson to Paris in 1784 for “the particular purpose” of learning French cookery. In 1787, after study and apprenticeship, he became Jefferson’s chef de cuisine in his house on the Champs-Elysées. That same year, his sister Sally Hemings joined him in Paris, brought as a maid for Jefferson’s youngest daughter. Both Hemingses were legally free in France, but both agreed to return to Virginia, and slavery, after negotiating terms and special privileges.

In 1789, Hemings returned to the United States with his sister and the Jefferson family. Jefferson was immediately appointed the ﬁrst Secretary of State and assigned to New York and then Philadelphia, so James stayed with him as a cook and valet. In 1793, Jefferson promised to free Hemings if he trained his successor.

They both returned to Monticello in 1794, and Hemings transformed dining at Monticello with his prowess in cooking French cuisine, aided by the new multi-burner stew stove. As agreed, he began training his brother Peter to become his replacement. In 1796, James Hemings left Monticello as a literate free man with $30. Over the next ﬁve years, he put his valuable culinary skills to work in Philadelphia, Baltimore and possibly Europe.

In February 1801, Jefferson tried unsuccessfully to recruit him as chef de cuisine at the President’s House. In August, Jefferson persuaded James to cook for him for two months at Monticello as a paid chef. In October, Jefferson learned of Hemings’s “tragical end”: his life cut short, the result of a suspected suicide.