Eight Objects in Our Collection 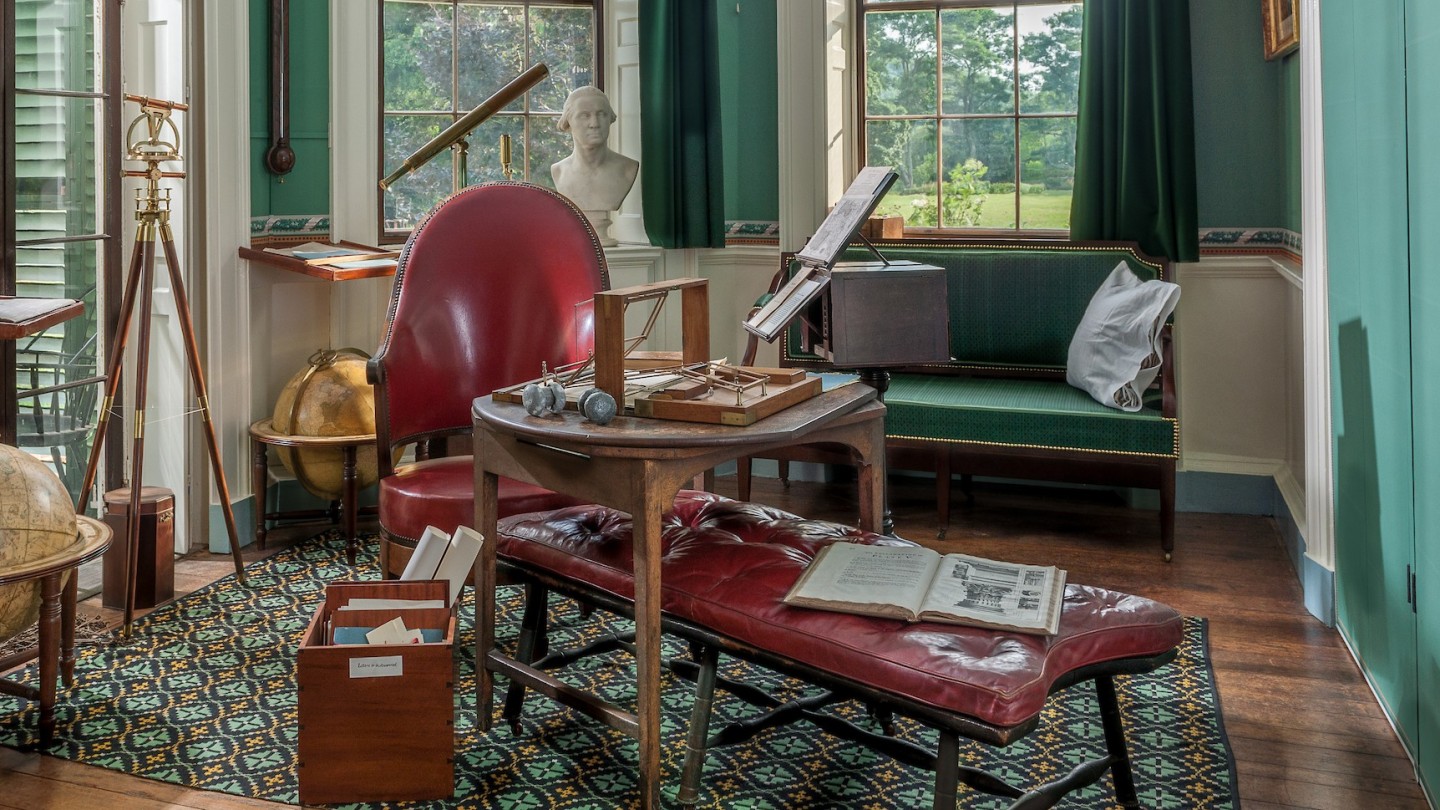 Despite thousands of surviving documents — he wrote and received nearly 47,000 letters — Monticello’s curators have only recently fully understood Jefferson’s comprehensive system for drafting and organizing his correspondence. These eight original objects served as components or tools that Jefferson used to arrange incoming letters, respond to them, often after “elaborate research,” copy his own letters, and organize everything for easy retrieval – even decades later. Jefferson’s Cabinet and Library were the hub of his reading and writing activities. Israel Gillette Jefferson, enslaved as a young man at Monticello, recalled making the fires and dusting books in the Cabinet and Library. He often escorted visitors in to see Jefferson, and sometimes stayed and overheard the conversations that took place, although he claimed to pay little attention to them.

Many of these objects are available on the Virtual Tour of Jefferson's Private Suite. 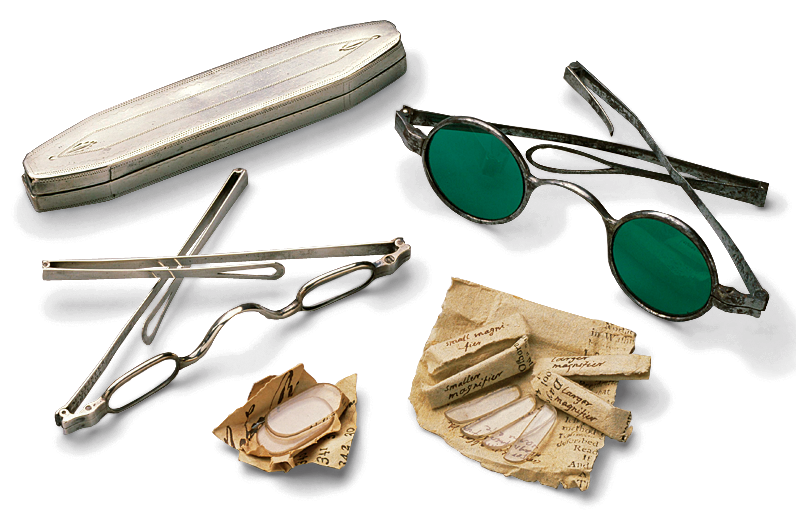 An often-overlooked tool for reading and writing – glasses!  Jefferson ﬁrst purchased reading glasses in Paris in 1789, at the age of 46, and probably began wearing them in the 1790s. In 1806, Jefferson, inspired by Benjamin Franklin’s glasses, collaborated with a Philadelphia optometrist to make the above spectacles with extremely narrow lenses. In 1812, at nearly 70, Jefferson’s declining vision required him to use glasses at night and for reading ﬁne print. Amazingly, we also know his prescription corrected for nearsightedness — an optometrist measured Jefferson’s lenses at +2.75 for the left lens and +1.75 for the right. 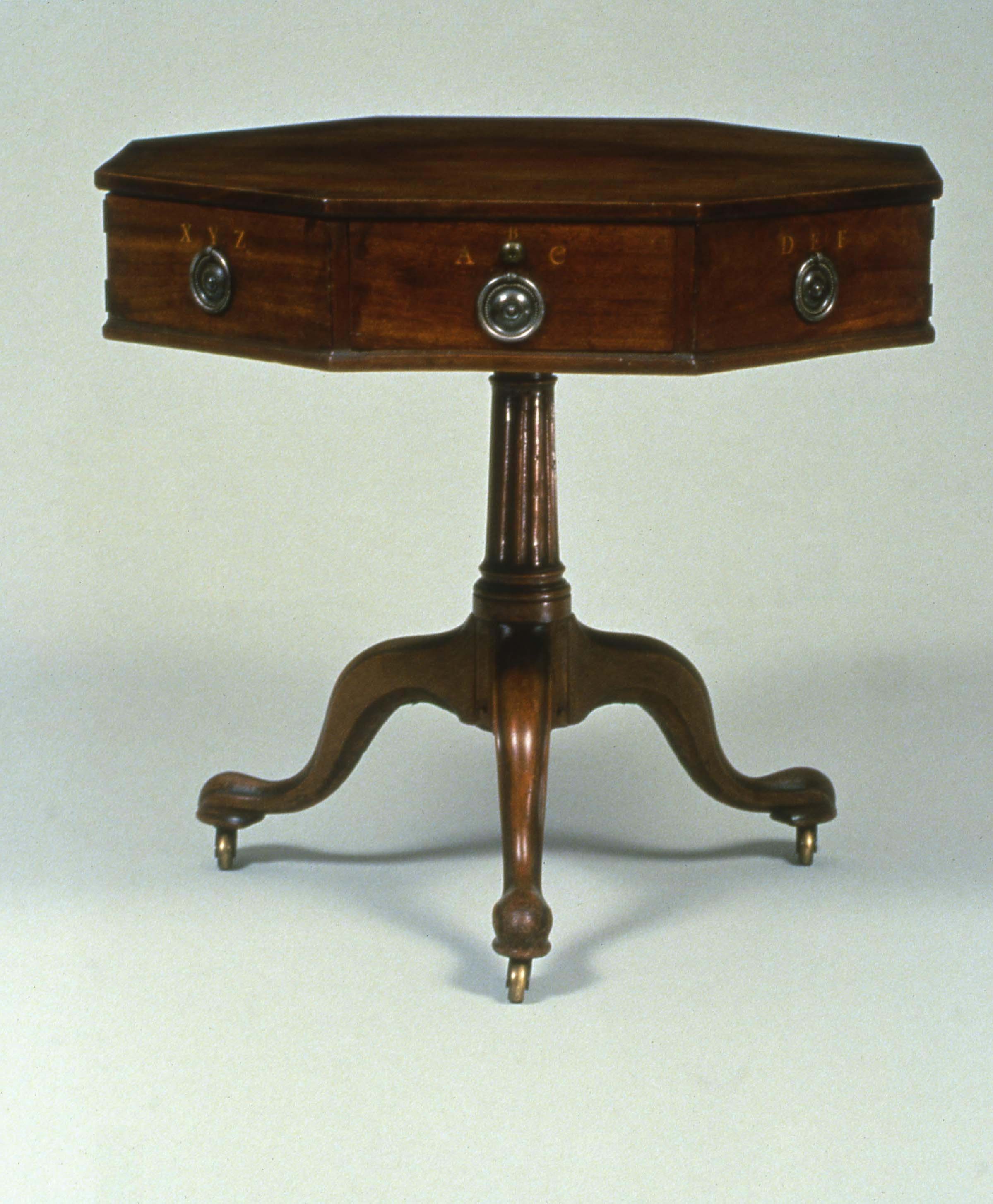 After Jefferson retired from public life in 1809, he depended upon letters to connect him to the larger world. To that end, this table functioned as his incoming mail workstation. Jefferson’s enslaved butler Burwell Colbert, among others, probably retrieved letters from nearby Charlottesville and brought them to Monticello.  Jefferson calculated that he received 1,267 letters in 1820. Using that figure, Colbert may have collected between 10 to 15 letters at a time.

Colbert would have delivered the mail to Jefferson, who then recorded the name and date of each arrival.  Jefferson placed the letter into the corresponding drawer in his specialized filing table until he was ready to respond.  Made by Thomas Burling in New York in 1790, the table has eight drawers labeled A, B, C, and so on and an ingenious locking system to secure the contents. 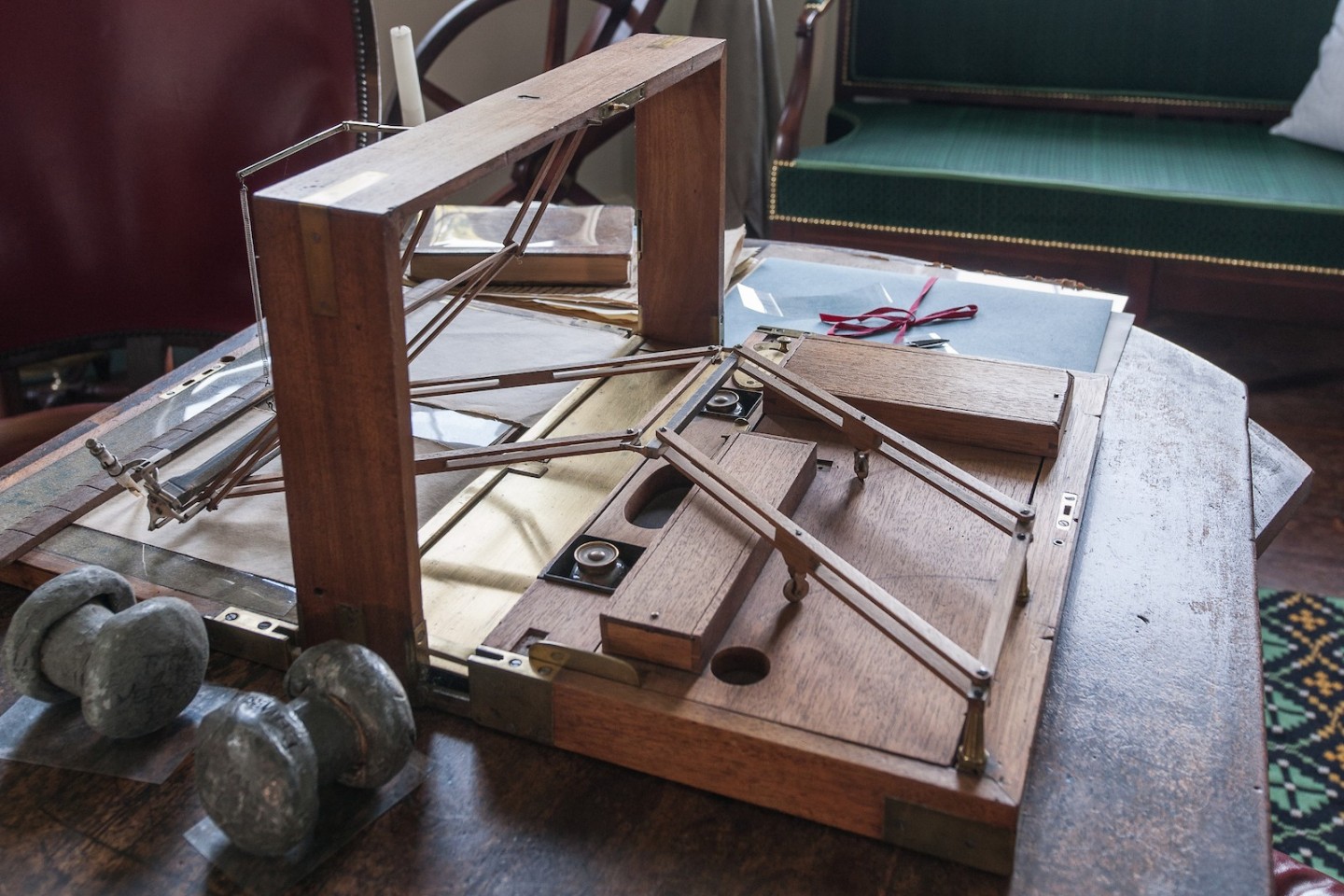 Jefferson loved gadgets and the polygraph, a two-pen copying machine, was among his favorites. He called it “the ﬁnest invention of the present age,” and made copies of many letters he wrote after he got it in 1804.

It is a commonly held misconception that Jefferson invented the polygraph. Instead, the device was invented and named by Englishman John Isaac Hawkins, who assigned his American patent rights to Charles Willson Peale before returning to England in 1803. Jefferson was one of Peale’s most eager clients, purchasing polygraphs for the President’s House and Monticello. He soon exchanged these machines for new ones as Peale continued to perfect the design — often according to Jefferson’s suggestions. Jefferson was an enthusiastic advocate for the polygraph. He encouraged his fellow citizens to adopt it and, in 1809, wrote “the use of the polygraph has spoiled me… I could not, now therefore, live without the Polygraph.” 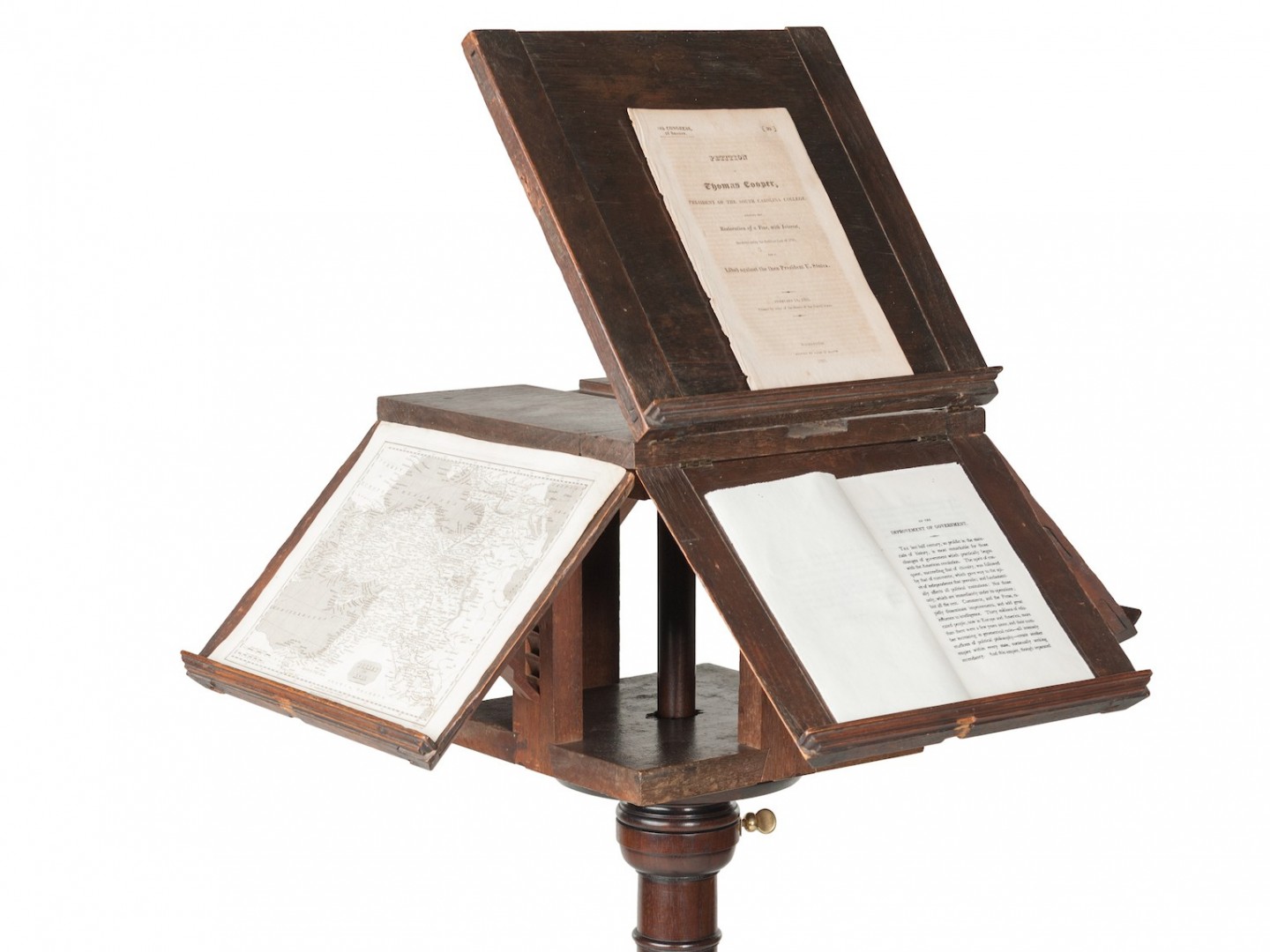 Like the famous polygraph, Jefferson used the revolving stand as part of his personalized correspondence system. When closed, the revolving stand looks like a wooden cube on an adjustable base, not readily revealing its purpose. Once opened, its ﬁve wings are meant to hold multiple documents and small books upright for reference. Most often situated next to his writing table, the stand enabled Jefferson to access drafts, reports, and letters to be answered efficiently and simultaneously, much like a computer desktop today. The stand was designed by Jefferson to uniquely suit his needs, and a reproduction base was recently built after the discovery of exciting new evidence. The ink-stained top reveals that he also used it for writing, as one early commentator noted that it “was used by Mr. Jefferson as a writing-stand, and on which yet remain some blots of ink which declared their independence of his pen.” 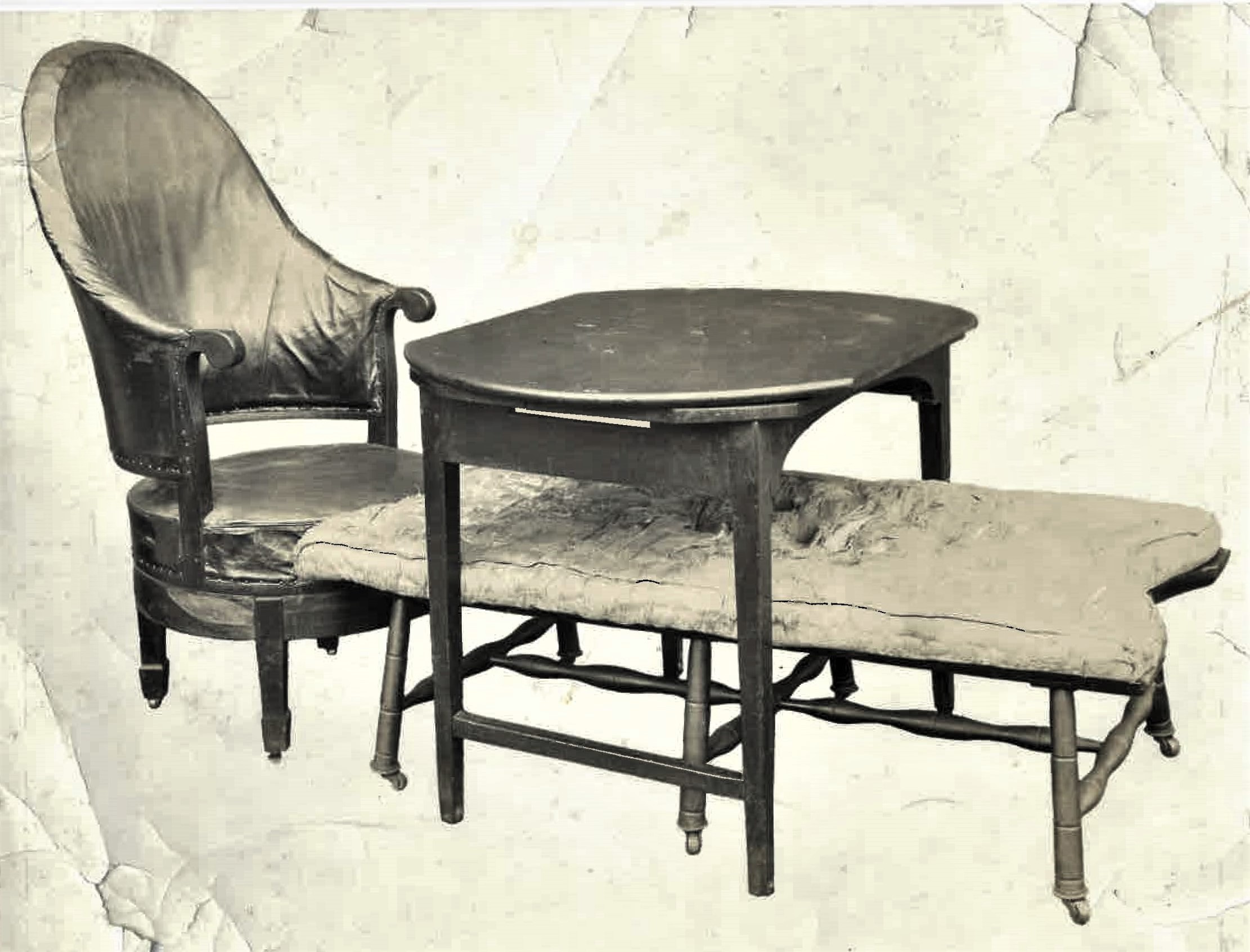 Seen here in its earliest known photograph, Jefferson’s writing workstation remains one of the highlights of a visit to Monticello. In addition to the above stand and polygraph, the group consists of a revolving armchair, bench, and writing table. Jefferson did not invent these forms, but instead adapted innovative designs to achieve the convenience and efficiency he required as a correspondent. Jefferson’s grandson Thomas Jefferson Randolph inherited the workstation in its entirety. He installed it in his nearby home Edgehill, where it remained until the early 20th century. Author Frank Stockton visited Edgehill in 1887, and the account, probably written on Jefferson’s own revolving stand, details what the family said about how the writing workstation functioned:

In his study, stood Mr. Jefferson’s writing-chair which was made to suit his peculiar needs; the chair itself was high-backed, well rounded, and cushioned, and in front of it extended a cushioned platform, on which Mr. Jefferson found it very pleasant to stretch his legs, being sometimes troubled with swellings of the smaller veins of these limbs. The writing-table was so made that it could be drawn up over this platform, legs, and all, and pushed down when it was not in use. The top of this table turned on a pivot; on one side of it were his writing materials and on the other was the little apparatus by which he made copies of all his letters. By this side was another revolving table, on which his books of reference lay, or were held open at proper angles. [1] 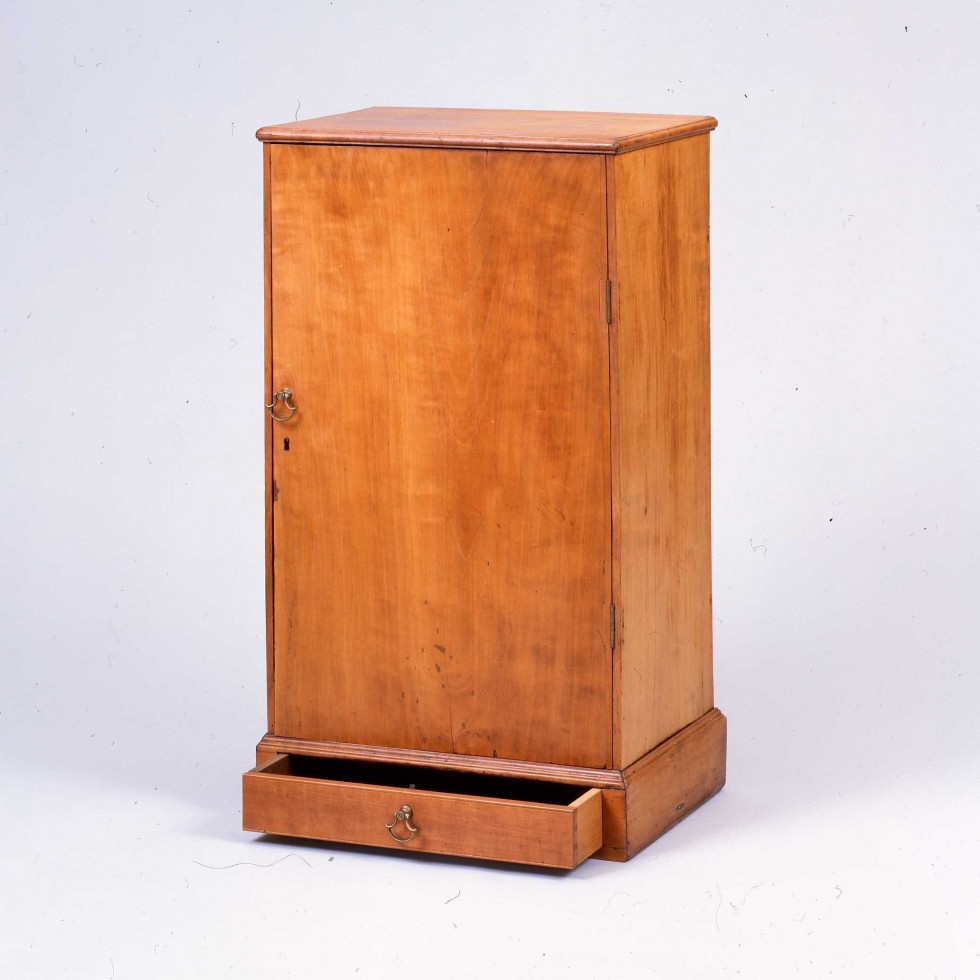 Unlike most of his correspondents, Jefferson did not use a letter book system where the text of the letter was hand-copied into a bound and indexed book. Instead he used a variety of copying devices, culminating with the polygraph, to make immediate copies of everything he wrote. To store his voluminous correspondence, both incoming and outgoing, Jefferson devised tracking and filing systems. Letters – incoming correspondence and his reply – were typically filed chronologically according to where he was living at the time. Eight filing presses, or cupboards, held multiple labeled file boxes filled with the correspondence that would eventually be used to document his life. Did the system work? In 1820, one young gentleman enquired after an old law record, recounting in amazement:

Mr. Jefferson immediately informed him that it would be no trouble at all, for if he had the paper … he could put his hand on it in ‘less than one minute.’ He stepped to a case, opened the door, run his eye over the letters of the pigeon holes, drew forth a package of ancient papers, glanced at their ‘files,’ and in less than one minute put the paper in the hands of his astonished visitor.[2]