Summer Pruning for a Floriferous Fall!

Maintaining your garden in the summer months can require serious determination and stamina, especially here in Virginia where the high temperatures, humidity, mosquitos, ticks, and chiggers conspire to chase the well-meaning gardener indoors to relax in the air-conditioning with a nice cold glass of iced tea. However, there is one quick and simple garden task that is worth a little effort in late spring or early summer: cutting back your late summer and fall-blooming perennials.

Known in England as the “Chelsea chop” (because it’s often done in late May around the time of the famous RHS Chelsea Flower Show), and championed in this country by Tracy DiSabato-Aust in her influential book The Well-Tended Perennial Garden, this pruning method may feel harsh and painful as you cut off up to 50% of lush new growth, but the results are worth some temporary suffering. Reasons to perform this task include: copious (but smaller) flowers; shorter, more manageable plants that don’t require staking; and staggered bloom time. Some of the well-known perennials that benefit from this practice are Phlox, Asters, and Chrysanthemums.

Here at the Thomas Jefferson Center for Historic Plants at Monticello (CHP) we have a number of perennials that we cut back in late spring to early summer in order to improve our ornamental display. Sweet Joe-Pye Weed (Eupatorium purpureum), a 5-7 foot tall, North American perennial that bears fragrant, pale pink to pale purple flowers in large, domed clusters in late summer, responds quite well when cut back in June. In order to prolong the bloom time and preserve some of the height and naturally large flower heads, we cut the front section back by 25-50%, leaving the rear portion to flower first. A magnet for bees and swallowtail butterflies, pruned plants produce even more flowers across a longer season for the pollinators to enjoy. In Figure 1, the image on the left shows the Sweet Joe-Pye Weed after pruning the front section in mid-June, 2013; the image on the right shows the same plants in late August, 2013: note the large flowers in the back that are fading, and the smaller, fresher flowers on lower stems in the front which are continuing to attract Tiger Swallowtail butterflies. 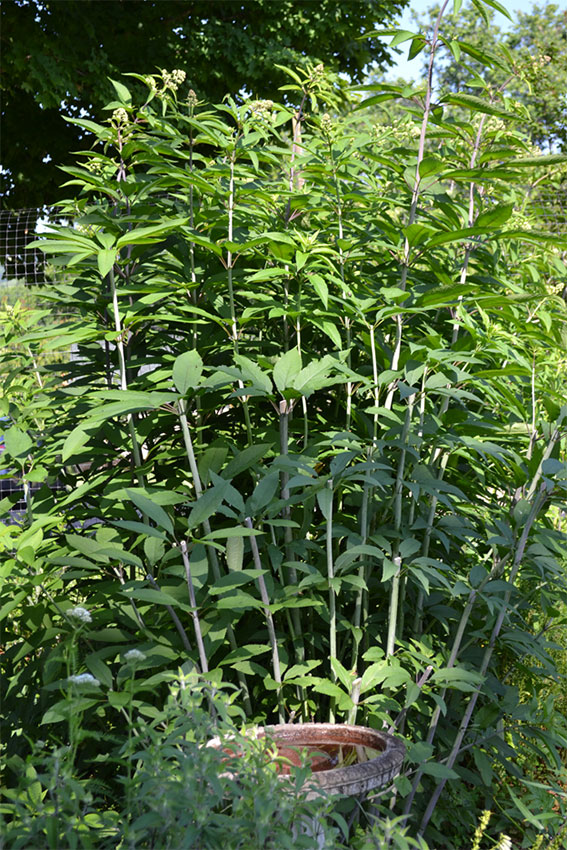 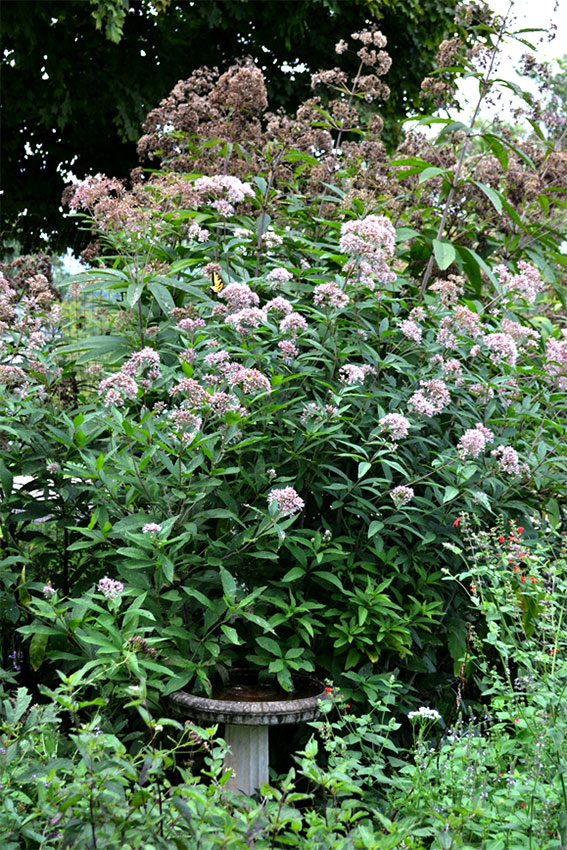 Another native, pollinator magnet that successfully made the leap from the wild to our gardens is the Swamp Sunflower (Helianthus angustifolius). This moisture-loving perennial boasts attractive, dark green, strap-like foliage and is covered in multitudes of yellow daisy-like flowers in late summer and fall. The Swamp Sunflower is a highlight of our Rain Garden, but because of its tall habit and thin stems it requires one quick cutting back by half in early summer. The image on the left in Figure 2 shows our Swamp Sunflower blooming in the fall of 2012, a year that we neglected to prune this plant; while it still looks beautiful, the unruly stems piled upon the ground and caused some dieback to the grass underneath. The right-hand image in Figure 2 shows the same plant one year later, a few months after cutting it back, and while it is just coming into bloom, the smaller stature and more manageable habit is visible. 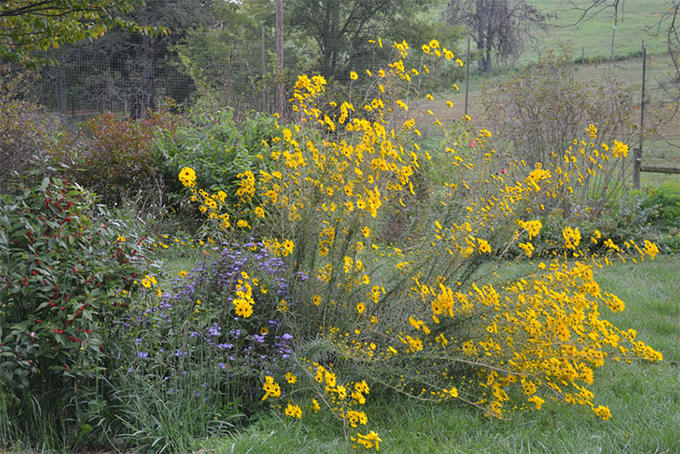 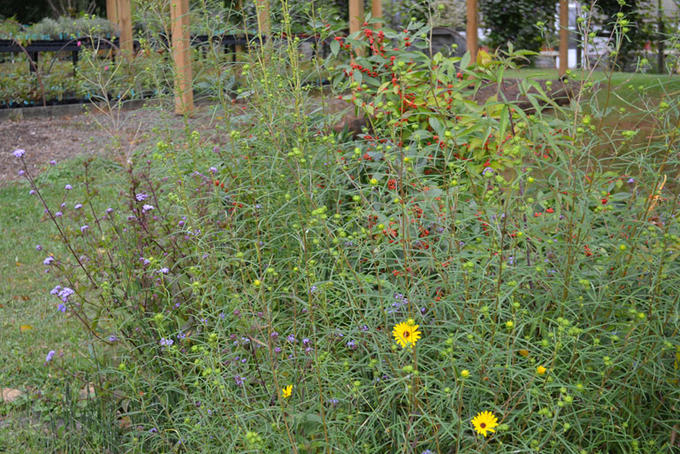 Perennial Chrysanthemums, first introduced to the West from China in 1790, provide color in the garden and nectar for pollinators from early fall until the last days of the growing season. The standard practice with non-hardy mums is to pinch them back multiple times during the summer in order to produce compact plants with lots of small flowers; however, the hardy types like the ones we grow at CHP respond well to just one hard pruning in June to maintain shape and to encourage more flowers. Growing along the edge of our perennial border is a pink-flowered selection, reflective of a type of Chrysanthemum available in the United States at least 100 years ago. If allowed to bloom at will, the flowers spill over the path, killing off the grass and making it difficult to pass by; therefore, we cut the front section along the path to just a few inches high, the middle section 5-8 inches high, and for the rear section we simply snip off the growing tips, or leave it alone. This pruning approach keeps the flowers off of the path, increases the number of blooms, and also prolongs the blooming period as the sections cut back more severely flower a bit later. 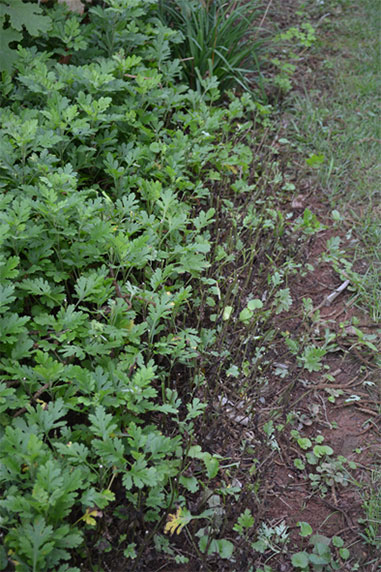 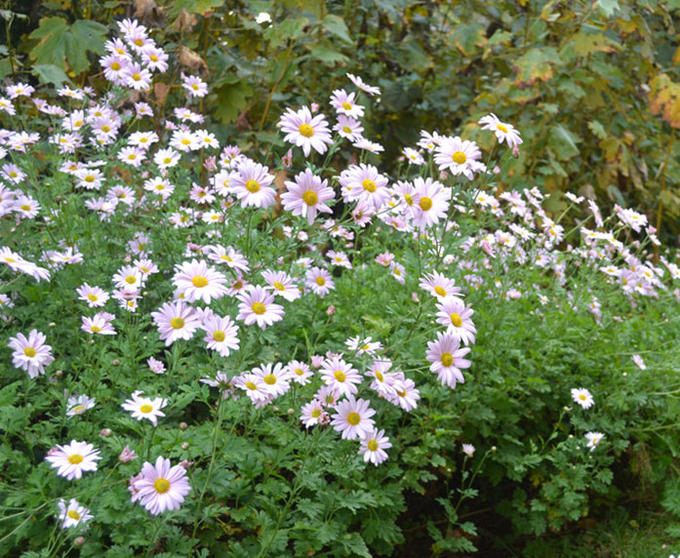