TO: President Jefferson, FROM: The Mysterious West 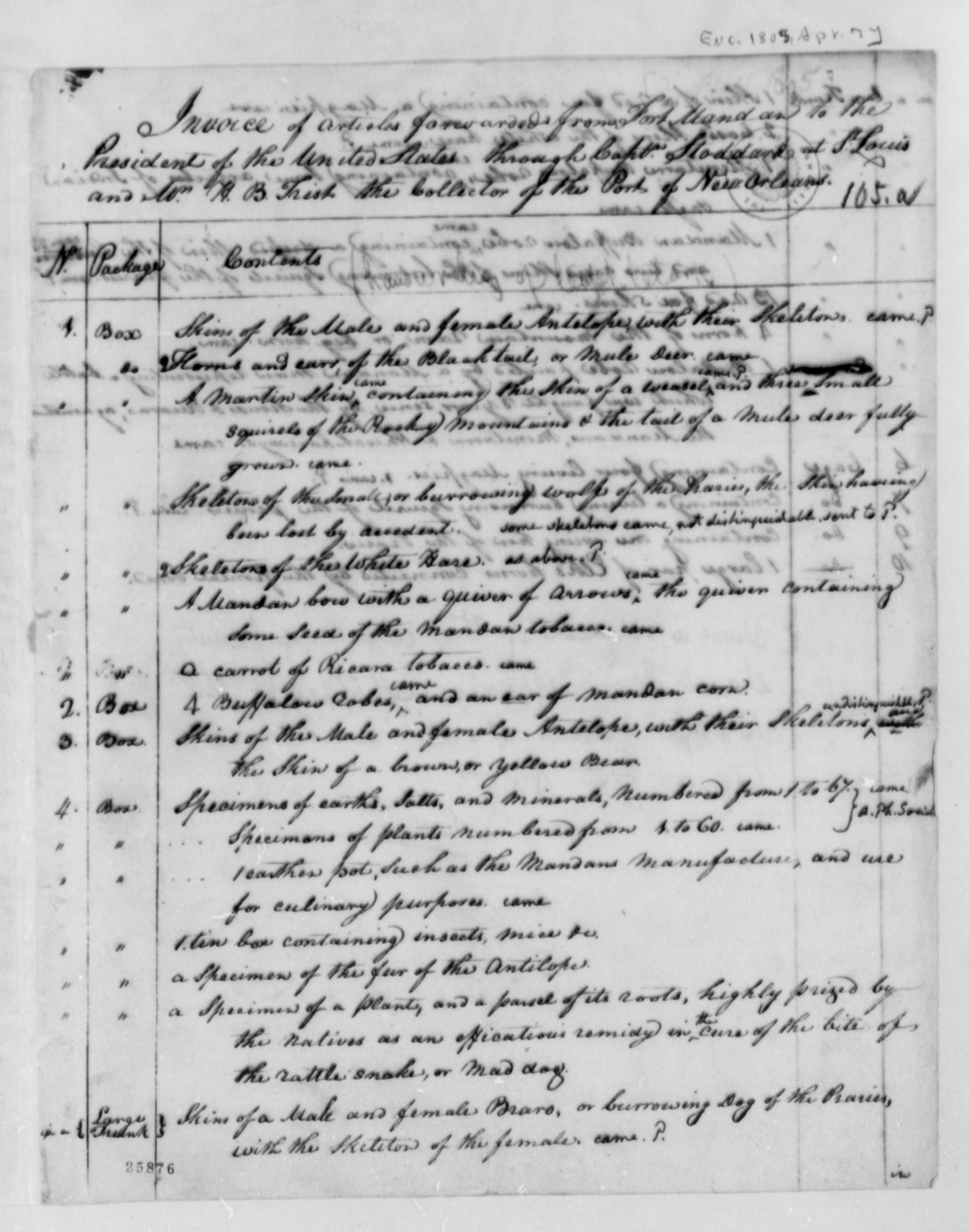 Meriwether Lewis’ packing list for an 1805 shipment of objects from Ft. Mandan

In April, 1805, a remarkable shipment was dispatched from a sizable Indian village near what is now Bismarck, North Dakota. A large hand-hewn boat headed down the Missouri River toward the President’s House in Washington, D.C., thousands of miles away, where Thomas Jefferson eagerly awaited word of the progress of the expedition he had promoted. To his great delight, not only words, but a whole host of objects, were in that shipment from Meriwether Lewis and William Clark’s “Corps of Discovery.”

The astonishing variety of artifacts included soil samples, animal skins and skeletons, seeds, Native American products, maps, and reports. And, in a supreme effort to give Jefferson and their fellow countrymen an idea of what they had seen in their trek which had begun near St. Louis in 1804, Lewis and Clark caged up living creatures: a prairie dog, a grouse, and four magpies. On August 12, 1805, the shipment arrived at its destination, a president who was intently interested in everything it contained. This was the first and only communication from the expedition, and also the last until September, 1806 when Lewis and Clark had at last returned to St. Louis and sent word of their safe arrival to Jefferson.

The accomplishments of the Lewis and Clark expedition in the face of hardships and profound uncertainties of every sort, are endlessly fascinating. The tales of courage, determination, and derring-do on the part of the members of the expedition, are legendary. The fact that the Corps included not only white American men, but also an enslaved man named York; a French fur trader named Charbonneau; Sacagawea, the Shoshone woman who acted as interpreter; her child who was born on the trail; and even a large Newfoundland dog named Seaman, makes the adventure even more remarkable. In the midst of such dramatic narratives, it may be easy to overlook the 1805 shipment back toward the East, but in fact there was a great deal of meaning and historic significance in the boatload of artifacts that floated down the Missouri that April. 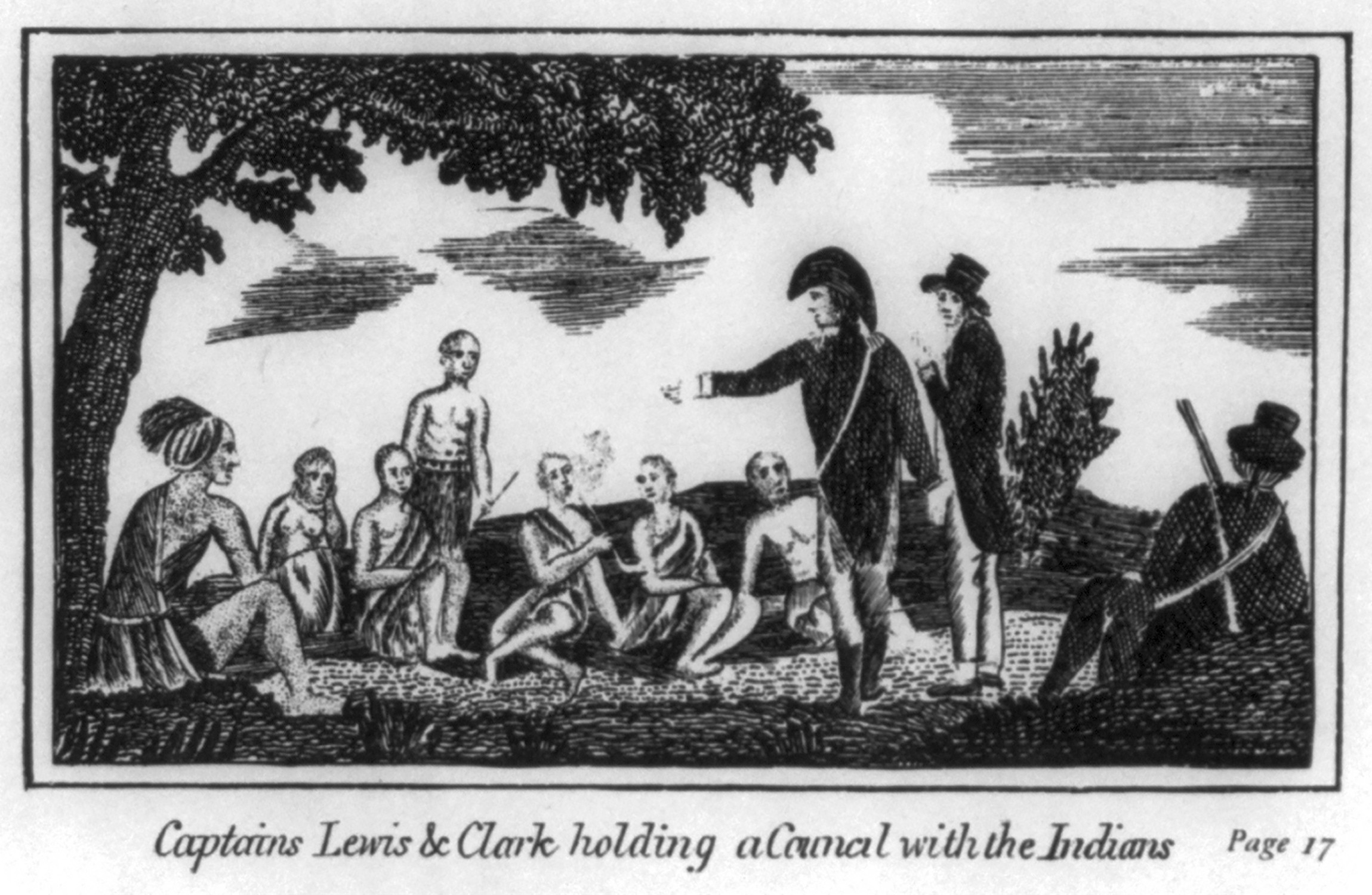 Captain Meriwether Lewis’s letter accompanying the shipment, dated April 7, could only tell so much of the story of their journey up to that point. Imagine the task of trying to summarize such an experience! Thus, it was the objects sent back to Jefferson that would have to communicate a great deal about the vast territory they were exploring, each a physical representation of an idea. Although Lewis does not say why the particular objects were chosen, certain messages seem to have been conveyed.

By far the largest number of objects were skins, skeletons, horns, and even ears of animals encountered in the Western territories: antelope, buffalo, mule deer, red fox, white hare, and “burrowing dog” among them. Jefferson had expressly asked the Corps of Discovery to take careful note of the unfamiliar animals they found, not only for scientific reasons, but also for commercial ones, as he hoped to set up a wide-reaching and profitable fur trading network on behalf of the United States. Lewis and Clark’s choices of luxurious and unusual skins to send back to Washington surely were meant to express optimism about this scheme while also furthering scientific knowledge about the animals of the Louisiana Territory. 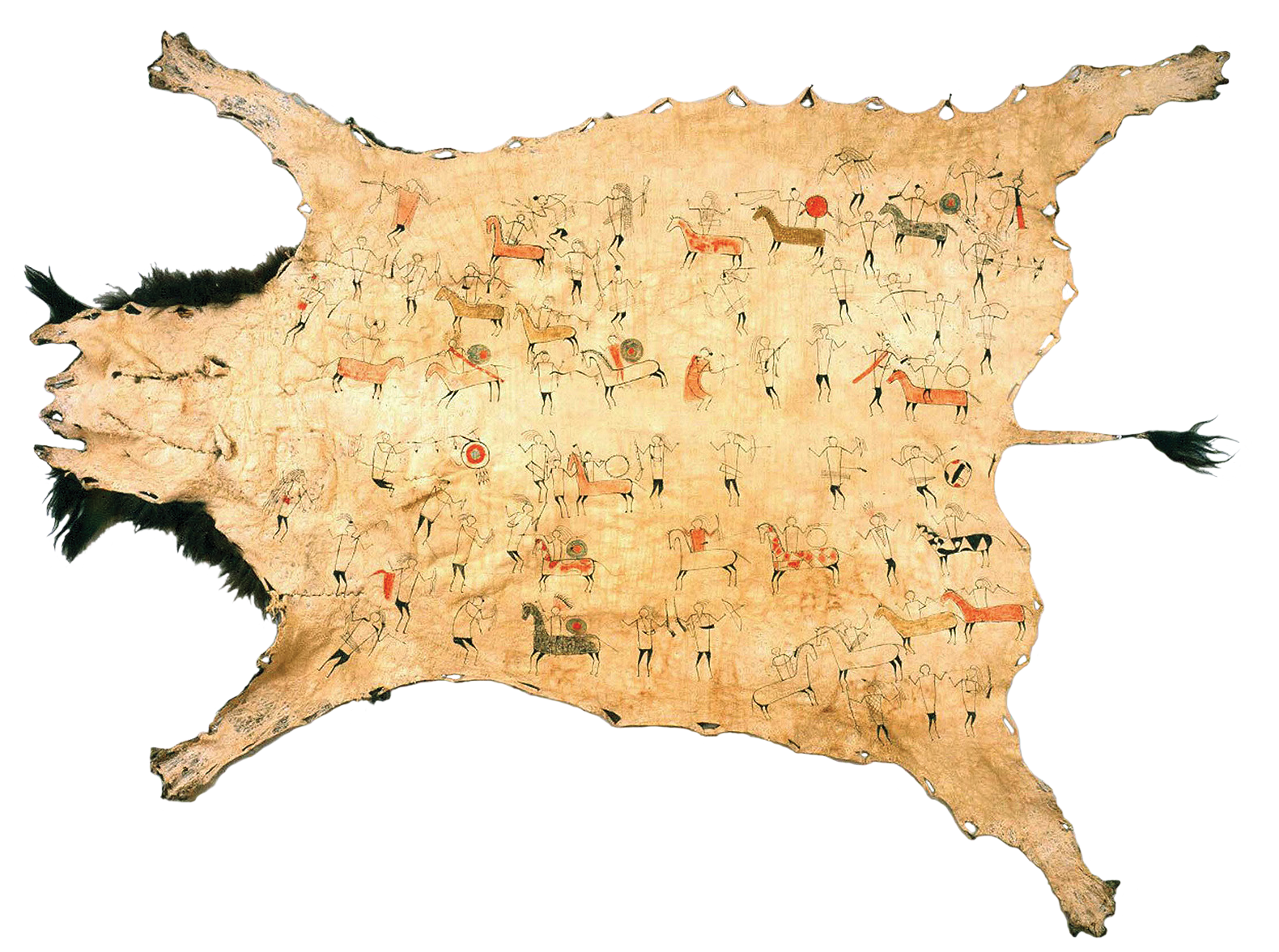 The second largest group of objects sent to Jefferson in 1805 was Native American artifacts and artistry. A Mandan bow and arrows might have indicated the sophistication of Native craft, while also giving information about warcraft amongst the tribes. An earthenware pot told about foodways of the Mandans and articles of clothing showed the customs and skills associated with Native dress. Visitors to Monticello today see prominently displayed in the Hall a replica of one of the most famous articles of Native craft that was sent in 1805. This was described by Meriwether Lewis in his packing inventory list: “a 1 Buffalow robe painted by a Mandan man representing a battle which was faught 8 years since, by the Sioux & Ricaras, against the Mandans, Minitarras & Ahwahharways.” In this battle scene, the warriors are depicted carrying both bows and guns: a snapshot of a turning point in history, indicating that white men’s weapons had already infiltrated the Native tribes by the time of Lewis and Clark.

Plants, seeds, minerals, soil samples, and “salts” make up the rest of the packing list of items sent back to the President’s House. Jefferson and fellow scientists like Charles Wilson Peale were able to learn a good deal from these about the natural world of the “mysterious West,” over a year before Lewis and Clark returned in person to further expand upon this knowledge. 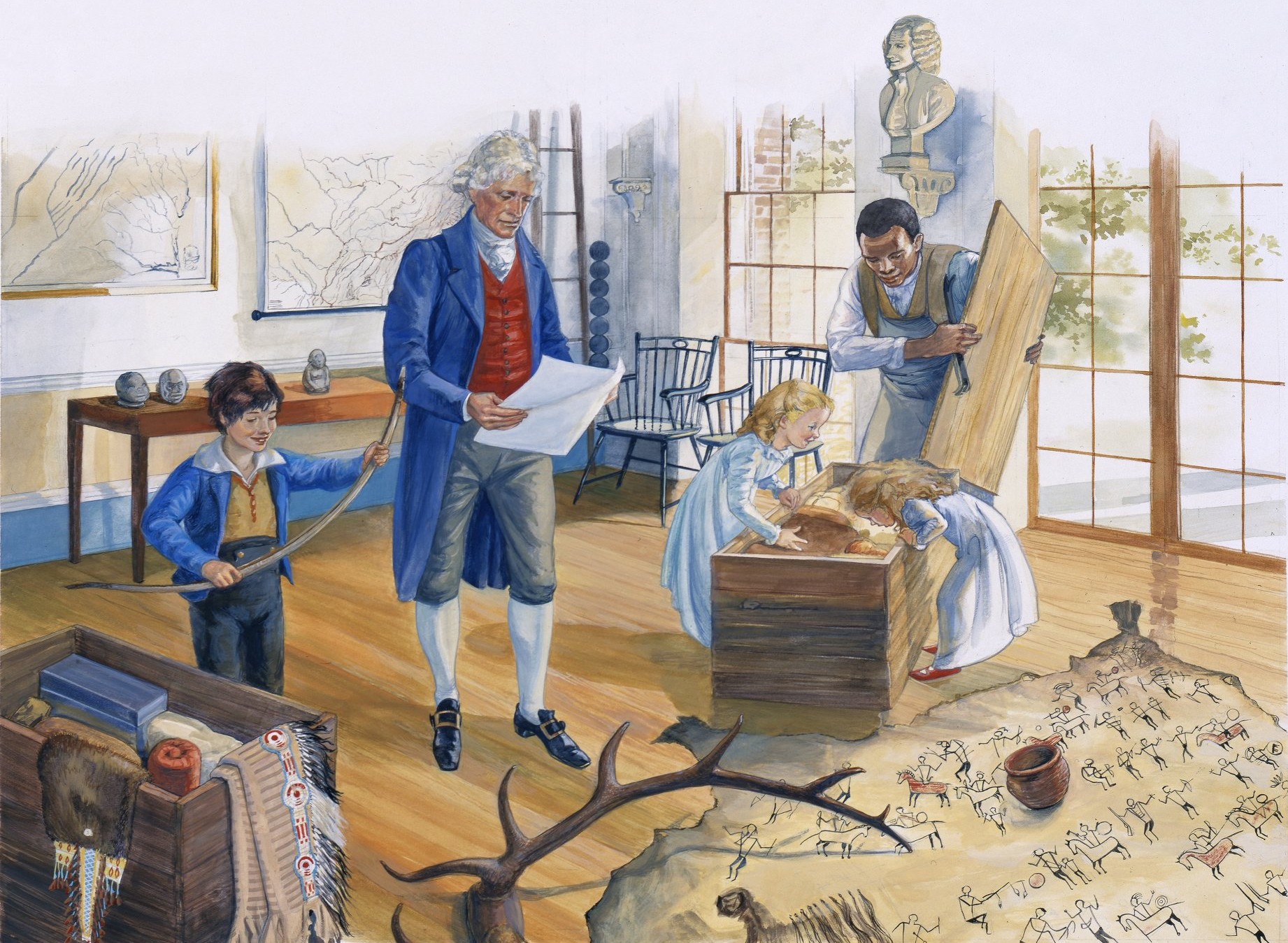 The original copy of Lewis’ inventory of the 1805 shipment still exists, with notations in Jefferson’s hand indicating which items he had given to Peale for his museum of natural history. Some objects went to the American Philosophical Society, and many were taken to Monticello to be displayed in the Hall, a room Jefferson then said had become “a kind of Indian hall.” Upon Lewis and Clark’s return to Virginia in 1806, Jefferson invited them and the Mandan chief Sheheke, who had accompanied them back to the East, to visit Monticello, so they could see “in what manner I have arranged the tokens of friendship I have received [sic] from his country particularly as well as from other Indian friends.” While it is unknown whether the chief did go to see the objects of his people on display as curiosities, it is worth speculating about what he would have thought had he done so. In any case, that display was but an early indication of the astonishing speed with which the United States would come to know, inhabit, and dominate the land that Lewis and Clark had passed through and marveled at. 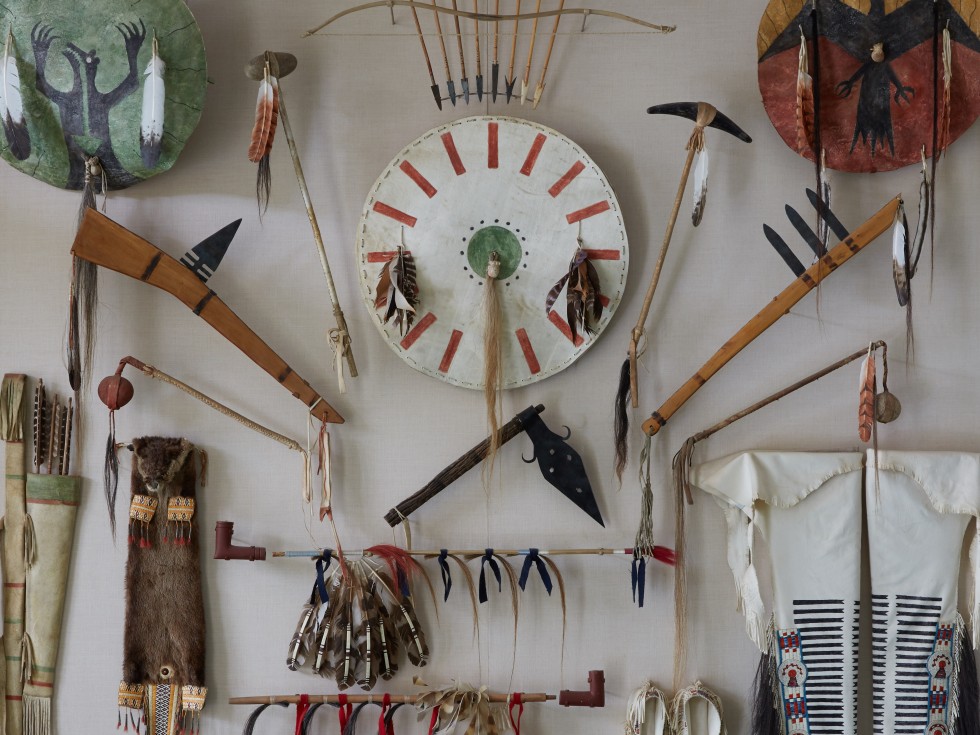 The shipment of 1805 was the leading edge of a wealth of information that was to come, and an indicator of the insatiable curiosity of Jefferson and his American countrymen for every aspect of the vast interior of the continent.

"His house is filled with paintings and Indian relics, and a view of his rooms affords as much gratification as of a museum." –Salma Hale, May 16, 1818