Lewis and Clark Artifacts at Monticello 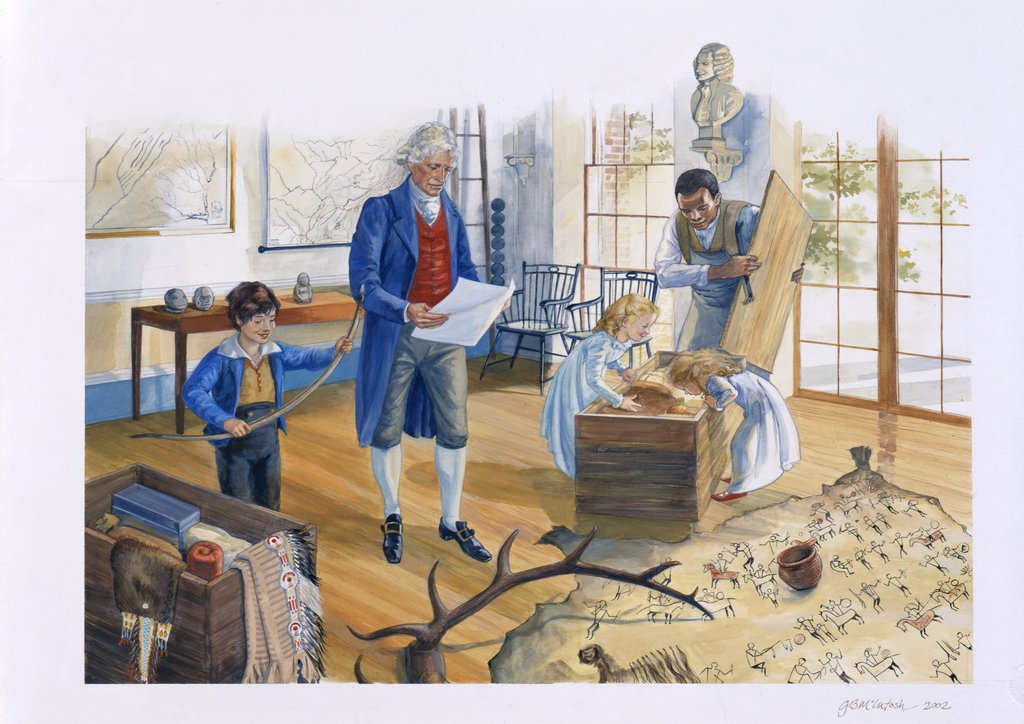 Exploration of the American West was an interest of Thomas Jefferson's throughout his life. In 1803, while he was president (1801-1809), Jefferson commissioned the expedition of Meriwether Lewis and William Clark to explore lands west of the Mississippi. In his letter of instruction to Lewis, Jefferson indicated all that he hoped the would be learned on the journey. The primary goals for the expedition were to establish trade ties with the Native American people and to find a water route to the Pacific Ocean. Jefferson also had a strong interest in scientific discovery, and asked that accurate maps be drawn, and previously unknown plants, animals, and minerals be noted and collected.

On August 12, 1805 a large shipment of items sent by Lewis and Clark (from Fort Mandan in present-day North Dakota) arrived at the President's House in Washington. This shipment included natural history and Native American artifacts. There were animal skins, horns, skeletons, plant, soil and mineral specimens, and written reports. Some these items were shipped to Monticello, Jefferson's home in Albemarle County, Virginia. The crates and boxes that arrived there included some items Jefferson planned to exhibit in his Entrance or Indian Hall. There were Indian buffalo robes, one of which showed a battle scene, beaded Indian leggings, an otter skin bag, some Indian utensils, including an earthenware pot, clay pipes, and a bow and arrows. Some of the natural history items that arrived were antlers of the antelope, deer and elk, and samples of earth, salts, and minerals. All of these previously unrecorded artifacts helped to enlighten Jefferson and others interested in the western half of the country.

This picture represents a day in the spring of 1806 when part of the shipment of artifacts sent back by the Lewis and Clark Expedition is being examined in the Entrance Hall at Monticello.

Watercolor painting by G. B. McIntosh