Thomas Jefferson hoped that his family would be able to live on at Monticello after his death. He left the property to his daughter, Martha Jefferson Randolph, and her children. Jefferson's enormous debt load, however, as well as the expenses of maintaining the building and lands proved too much to handle. Although there were several belated plans to save Monticello for the family, nothing came of them, and Mrs. Randolph put Monticello and its furnishings up for sale. Much of Jefferson's furniture, plate, and farm equipment, as well as 100 enslaved men, women and children, were bought at a public auction in 1827.

The idiosyncratic mansion proved harder to sell. Finally, four years after the auction, the house and property went to an eccentric Charlottesville druggist, Jam 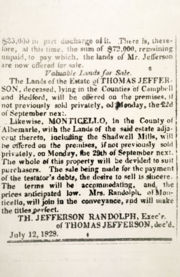 James Barclay despised Jefferson's political ideals, and had very little interest in the great house itself. He wanted the land for a scheme that would turn Monticello into a silkworm farm. In order to plant mulberry trees, Barclay tore out many of the trees Jefferson had planted and uprooted the extensive gardens. Within three years, the project predictably failed, and Barclay now looked around for a buyer. In 1834, he sold the house and surrounding land for $2,500 to Uriah Phillips Levy, an officer in the United States Navy.

1827 March 28. (Virginia Jefferson Randolph Trist to Ellen Wayles Randolph Coolidge). "[I]t will grieve you both very much to hear of the depredations that have been made at Monticello by the numerous parties who go to see the place. Mama’s choicest flower roots have been carried off, one of her yellow jessamines, fig bushes ..., grape vines and every thing and any thing that they fancied. N. consulted with Mr. Garrett and put a notice in the paper's requesting the visitors to desist from such tresspasses, but Burwell says that they have been worse since than they were before."[1]

1828 November 17. (Thomas Jefferson Randolph to J.H. Cocke). "I believe that it will be a fortunate thing for my mother to give up the house. The estate is irredeemably insolvent, perhaps to $15,000 or $20,000 and must be sold, or at present advised I should consider myself fortunate in obtaining $12,000 for the buildings and 900 acres of good land, including the two mountains."[2]

1829 December 7. (Thomas Jefferson Randolph to J.H. Cocke). "I have doubted whether I ought not to take $10,000 for it with 1000 acres of land attached to it. ... The estate being immediately insolvent I have deemed it safest to endeavor to close the concern as soon as possible."[2]

1831 June 29. (Cornelia Jefferson Randolph to Ellen Wayles Randolph Coolidge). "We are none of us in very good spirits just now owing to the probability there is of Monticello being sold; Dr Barclay (one of Mrs Harris’s sons) has offered brother Jeff. his house in Charlottesville Mr Hatch’s house) & $9000 for the place. The thing is not determined yet; brother Jeff. will not make the bargain unless he can sell the house in Charlottesville, which they say he can do, nor do I believe that Dr B. is positively determined on the purchase. His offer is quite a liberal one, brother J. asks about 12,000 for Monticello & Dr B. offers him his house for what he gave for it $3500, although he has made improvements in it .... There remain $30.000 of the debts still to be paid & the creditors are pressing & he (brother J.) has made nothing from the publication of the manuscripts .... he thinks indeed Dr Barclay will buy land enough round Monticello to make the sum $14,000."[4]

[ca. 1831 August 15]. (Martha Jefferson Randolph to Ellen Wayles Randolph Coolidge). "Monticello is at last sold ... the house & 500 acres ... Jefferson will receive Mr Hatch’s house in Charlottesville at 4000 $ for which Mrs Carr will ... give him $3500 down ... and he will receive $3000 cash I beleive from the purchaser Dr Barclay, the second son of poor Mrs Barclay that married old Harris. ... you will say it was a dreadfull sacrifice but the debts are pressing the place going to ruin, and no other offer."[5]