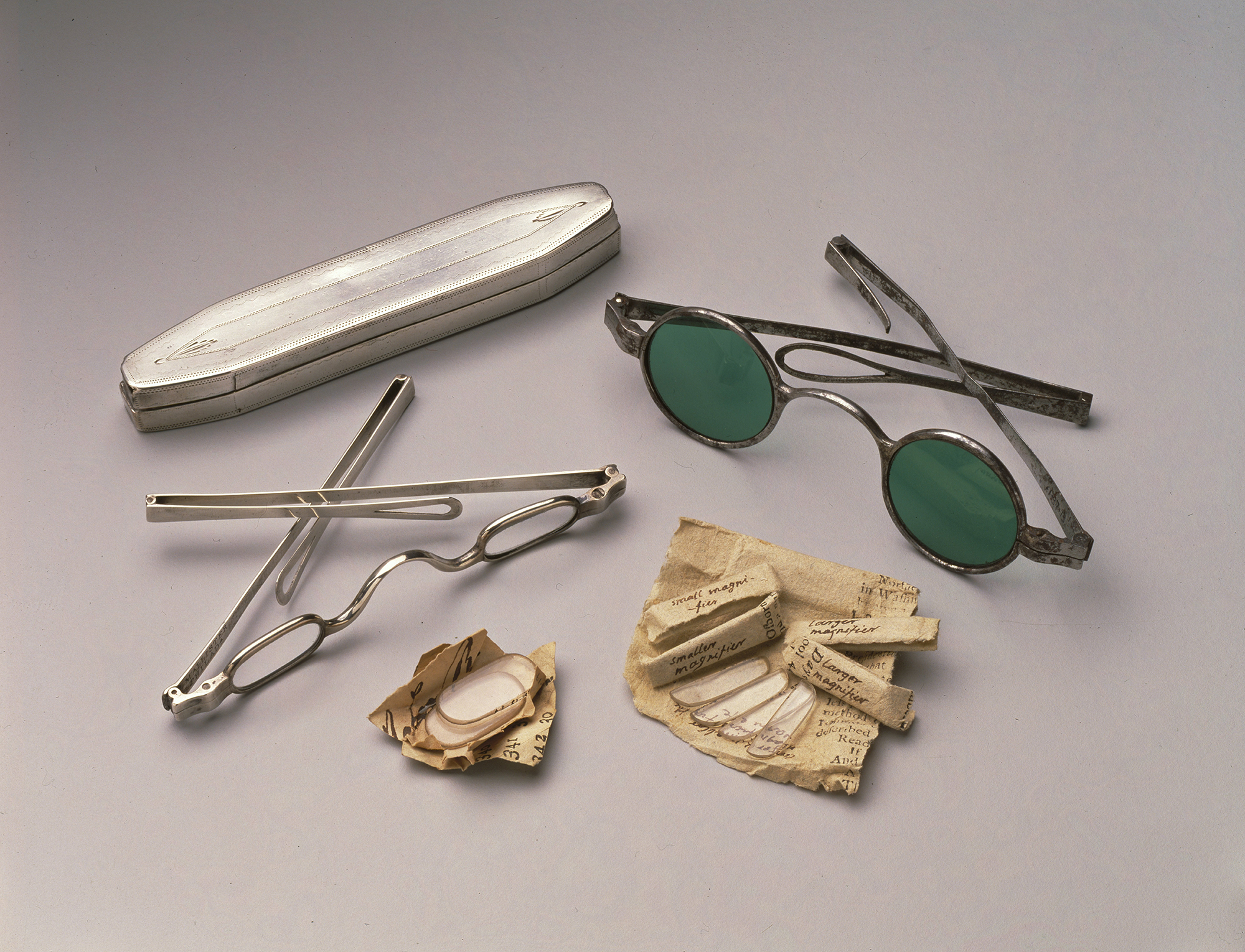 Thomas Jefferson reported, only four months before his death in July 1826, that his eyesight was the faculty least impaired by age.1 For many years, however, he had used eyeglasses or "spectacles" for reading.2 In 1806, during his second presidential term, Jefferson placed a new order for eyeglasses with Philadelphia optician, John McAllister. That order grew into a two-year correspondence and resulted in spectacles designed by Jefferson to suit his specific visual needs.

Jefferson's November 1806 letter to McAllister began, "You have heretofore furnished me with spectacles as reduced in their size as to give facility to the looking over their top without moving them. this is a great convenience; but the reduction has not been sufficient to do it compleatly. I therefore send you a drawing No. 1. so much reduced in breadth as to give this convenience compleatly, & yet leave field enough for any purpose." The "drawing No. 1" that accompanied this letter diagrammed frames of a narrow, elongated shape with each lens, or "eye glass," 7/8 inches long with a width of 3/8 inches, and gave the critical "center to center" measurement of each lens as 2½ inches.3

The interpupillary measurement was Jefferson's one mistake, and placed McAllister in the position of informing the President that he feared the 2½ inches from center to center of the spectacle lenses too wide. McAllister wrote by return post, "wishing to making them to please and recolecting the President has but a small head I wish them examined again." He reminded Jefferson that when looking at a book or other object at about a 15-inch distance, the eyes will meet at a point and therefore the center of the "spects should be rather nearer than the eyes."4 Jefferson recognized his mistake of not reckoning the "convergence of the two Axis when directed to a book," as he had made his measurement looking directly into a mirror. He then instructed McAllister to correct the center to center measurement but proceed with his original design.5

In addition to these newly designed reading spectacles, Jefferson wanted to try what would come to be known as bifocals. In the same 1806 letter to McAllister he wrote, "Those who are obliged to use spectacles know what a convenience it would be to have different magnifiers in the same frame. Dr. Franklin tried this by semicircular glasses joined horizontally, the upper & lower semicircles of different powers, which he told me answered perfectly. I wish to try it." Clearly, Jefferson had discussed with senior statesman Benjamin Franklin his spectacles of double lenses for both near and distant vision. Based upon Franklin's innovation, Jefferson included a second drawing of spectacles with two semicircular lenses set into small round frames and instructed that the lower lens was to be of greater magnifying power than the upper. For these frames he wished for "a compleat set of half glasses to be sent, from the magnifier adapted to the first use of spectacles, to that suiting the oldest eyes. All fitting exactly the frames."6 It was customary at the time to purchase a series of lenses along with the frames so that they could be changed as the eyes weakened with age.

McAllister completed Jefferson's order within two weeks but admitted that the double focus lenses had been extremely exacting due to "the smallness of the eyes and the difficulty of getting so many pair to fitt together in halves." Nevertheless he was able to comply with Jefferson's request in frame sizes and provided lenses in "12 pair different focus for the double eye ... & 6 different focus for the others."7

Jefferson's next request of McAllister presented an even greater challenge for the optician. Jefferson reported, "I am extremely satisfied with Dr. Franklin’s method of fixing the spectacles, by composing each glass of two half glasses of different magnifying powers, and those you made for me answer perfectly except" that in the round frames the glass would shift until the seam between the two lenses was obstructing the line of vision. Jefferson's solution was to keep the convenience of the double lenses, but to put them in the very small oval frames from his previous order. He knew the size could be problematic but rationalized that "altho these glasses are very small, & consequently the half glasses uncommonly so, I am not afraid but that they will present full space enough for reading, writing &c."8

McAllister's response began, "I was fearfull I should not be able to put Dble glasses in such small frames," which he quickly contradicted with, "however I have put in two pairs and hope they will please." He had at least partially fulfilled Jefferson's request, but in case the new spectacles did not "please," McAllister included instructions for using a small amount of glue to prevent the glass from shifting in the round frames. One pair of the new lenses was of a 16-inch and 20-inch focus; the other of a 12-inch and a 16-inch focus.9 By combining a focal length for reading and a focal length for intermediate vision in a single frame so condensed in size that it did not interfere with distance viewing, Jefferson had essentially achieved the benefit of trifocals. His penchant for adapting and refining ideas had extended even to his spectacles.

1784 March 16. (James Madison to Jefferson). "One of my parents would be considerably gratified with a pair of good spectacles which can not be got here."10

1784 May 15. (Madison to Jefferson). "Your favor of the 7th. inst: with another pair of Spectacles inclosed came safe to hand on thursday last. I shall leave the person for whose use they were intended to take choice of the most suitable and will return the other pair to Mr. Dudley by the first conveyance, unless I meet with a purchaser which I do not expect."13

1788 April 25. (Jefferson to Charles Bellini). "Having seen by a letter you wrote him that you were in want of a pair of spectacles I undertook to procure you some, which I packed in a box of books addressed to Mr. Wythe, and of which I beg your acceptance. ... I packed with the spectacles three or four pair of glasses adapted to the different periods of life, distinguished from each other by numbers, and easily changed."14