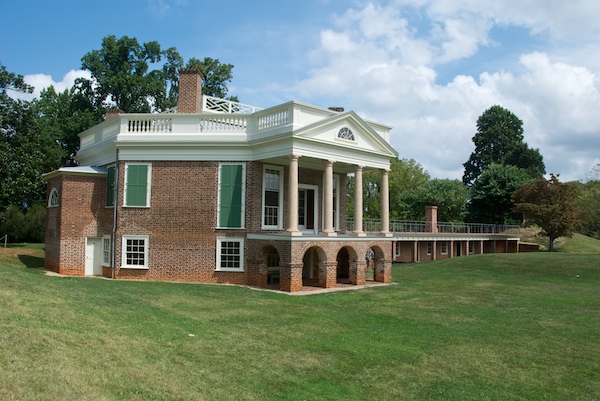 Poplar Forest was Thomas Jefferson's plantation in Bedford County, Virginia. William Stith originally patented the land in the mid-eighteenth century and probably chose the name "Poplar Forest." John Wayles, Jefferson’s father-in-law, purchased the property in 1764. When Wayles died in 1773, his daughter and her husband inherited the 4,819-acre tract.1 Jefferson operated Poplar Forest primarily as a tobacco plantation, managed by overseers and worked by a community of nearly 100 enslaved laborers.

Working from his own designs, Jefferson began building a residence at Poplar Forest in 1806.2 The one-story, brick house would be octagonal in shape. Pedimented porticoes would occupy the north and south facades. The interior design called for four elongated octagons surrounding a central square. Construction was nearing completion when Jefferson's presidency ended in 1809. Throughout his retirement years, Jefferson would make Poplar Forest his personal retreat from the busy, crowded scene at Monticello.

Before 1809, Jefferson managed Poplar Forest from a distance, but that practice changed with retirement. Freed from government service, Jefferson made at least three annual visits to Poplar Forest. He traveled to Bedford at the height of spring, in late summer, and in early winter. He described his retreat as "the best dwelling house in the state, except that of Monticello; perhaps preferable to that, as more proportioned to the faculties of a private citizen."3

Though Jefferson enjoyed the privacy of Poplar Forest, he was not entirely alone there. Two of his granddaughters generally accompanied him. His granddaughter Ellen Randolph Coolidge later recalled Jefferson's days in Bedford County. "At Poplar Forest," Ellen wrote, "he found in a pleasant home, rest, leisure, power to carry on his favorite pursuits—to think, to study, to read—whilst the presence of part of his family took away all character of solitude from his retreat. His young grand-daughters were there to enliven it for him, to make his tea, preside over his dinner table, accompany him in his walks, in his occasional drives, and be with him at the time he most enjoyed society, from tea till bed time."4

Following Jefferson’s death in 1826, the Bedford property was willed to his grandson, Francis Eppes. Eppes sold it two years later to William Cobbs. The Cobbs-Hutter family owned Poplar Forest for more than a century, before selling it in 1946. In 1984, the Corporation for Jefferson’s Poplar Forest, a nonprofit foundation created specifically to protect and restore the property and to make it open to the public, purchased the house and a fifty-acre parcel of land at Poplar Forest.5

Over the years, Jefferson’s octagonal house experienced fire damage and remodeling, but the floor-plan, walls, chimneys, and columns survived. Using early nineteenth century building methods, carpenters and masons are now restoring the house to its original appearance. In addition to the main house, a separate kitchen, smokehouse, and two octagonal outhouses have also survived.6