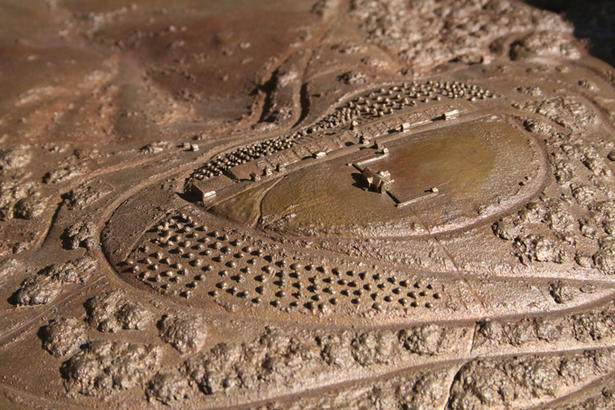 This 9½-foot by 5½-foot bronze relief model of the 5,000-acre Monticello plantation offers visitors a totally new and comprehensive view of Jefferson's landholdings.

The model is sculpted on the scale of 1 inch to 200 feet, so the Monticello house, including its terrace wings, measures less than two inches across. But this scale provides a bird's-eye perspective on not only the extent of Jefferson's property (the Monticello mountaintop and four "quarter" farms) but also of the area's complex topography; the agricultural, ornamental, and natural landscapes; the rivers and streams; the structures and roadways that existed in Jefferson's time; and the spatial organization of the plantation.

The Monticello Plantation Model incorporates information from a wide range of sources, including Jefferson's own surveys, 19th-century drawings, early 20th-century aerial photographs, and recent research by Monticello archaeologists. The model's representation of the topography is based on a digital contour map made with photogrammetric techniques accurate enough to render contours at two-foot intervals.

The model, located on east end of the Courtyard, is surrounded by an informational reader rail.