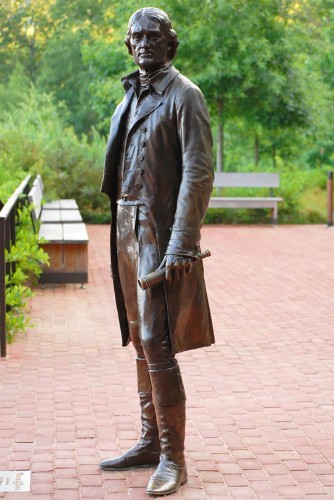 Nearly 6 feet, 3 inches tall, the portrait captures Jefferson about the age of 70 as he probably looked during his retirement at Monticello after he left the presidency in 1809. Highly visible from its site near the upper entrance to the Robert H. and Clarice Smith Gallery and the shuttle bus to the mountaintop, visitors are drawn to this compelling "Mr. Jefferson."

To create this new portrait, Monticello curators and StudioEIS artists carefully studied the life portraits of Jefferson. Chief among the works studied was the bust of Jefferson by Jean-Antoine Houdon, the greatest sculptor of late 18th-century France, for whom Jefferson sat in 1789. The team also paid close attention to likenesses of Jefferson painted by Rembrandt Peale and Gilbert Stuart. The standing pose is derived from Thomas Sully's portrait painted at Monticello in 1821 for the U.S. Military Academy at West Point.

The portrait was executed by Stuart Williamson under the direction of Ivan Schwartz.