By Fraser Neiman, Director of Archaeology

Thomas Jefferson’s passion for French cuisine has earned him the title “founding foodie.” Archaeological excavations in the basement of the South Pavilion at Monticello are advancing our understanding of the actual historical dynamics that underlie the title. The South Pavilion is the oldest building on the Mountain-top, completed in 1770. Its basement housed Monticello’s kitchen until 1809, when three feet of ﬁll was dumped into it, raising the ﬂoor to match the level of the newly completed South Wing, which included a new kitchen. Monticello archaeologists have excavated three trenches into the 1809 ﬁll, revealing for the ﬁrst time how Jefferson’s ﬁrst kitchen was laid out and altered over four decades. 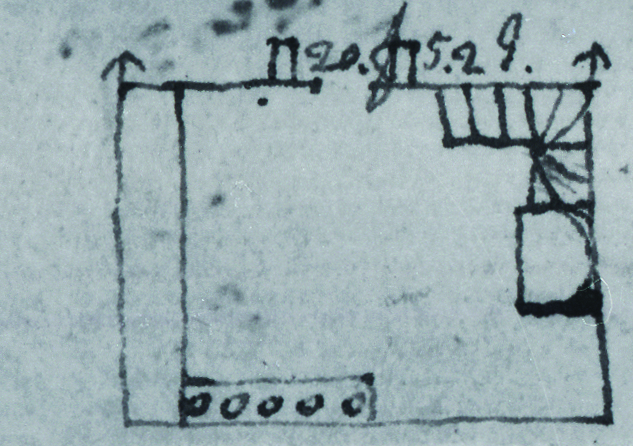 Archaeologists discovered the original kitchen ﬁreplace, along with evidence of a crane to suspend iron cooking pots, a bake oven, at least two generations of kitchen counters, or “dressers,” and most importantly, two generations of stew stoves. The stoves — potagers in French — are the key physical traces of Jefferson’s engagement with French cuisine.

A stew stove was the 18th-century analog of a cooktop: a waist-high masonry counter containing several burners fueled by charcoal taken from the ﬁreplace. Stew stoves allowed cooks to achieve precise control of cooking temperatures and the timing of adding ingredients, followed by bouts of stirring and skimming. This control was essential to preparing fricassees, stews and sauces made with roux or emulsiﬁed with cream, butter and eggs, along with custards and glazes that were the hallmarks of classical French cooking. 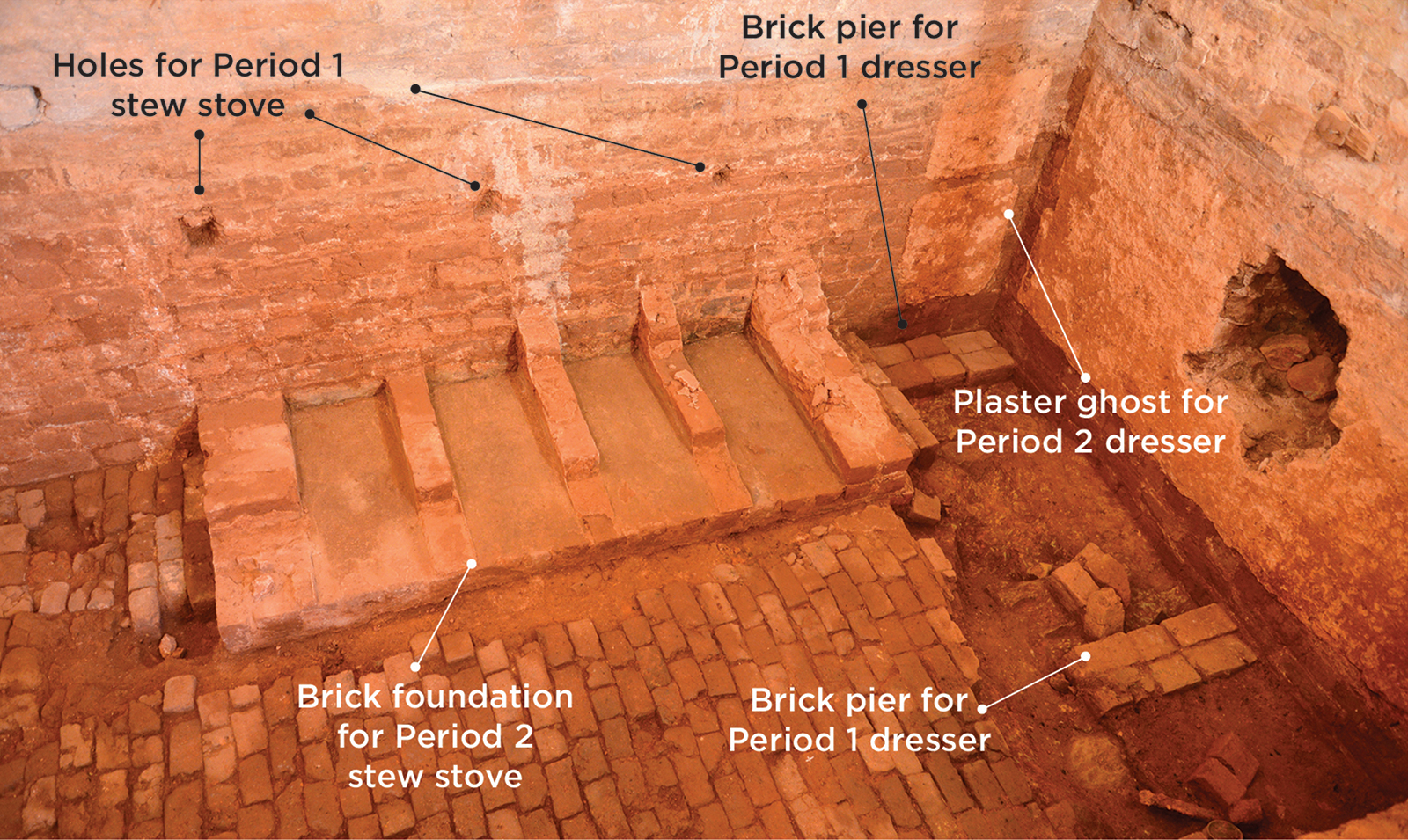 Jefferson’s design drawing for the South Pavilion, dating to the late 1760s, features a ﬁve-burner stew stove and points to his early interest in French cooking, probably kindled by regular dinners at the Governor’s Palace when he was a student at William & Mary. Archaeological evidence hints that the ﬁrst stew stove was not original to the kitchen but added later as part of a renovation that may have also included a new dresser. Enslaved cook Ursula Granger may have used this stove to prepare the French-inﬂuenced recipes found in the most popular English-language cookbook of the 18th century, Hannah Glasse’s The Art of Cookery, which Jefferson owned. Ursula Granger’s son Isaac recalled, “Mrs Jefferson would come out there with a cookery book in her hand and read out of it to Isaac’s mother.”

In 1784, Jefferson took James Hemings with him to Paris with the express purpose of having him trained in French cuisine. A second kitchen renovation may postdate their return in 1789. The ﬁrst stew stove was replaced with a new model that may have better matched the state-of-the-art stoves, whose use  Hemings mastered in Paris. Archaeologists found the remains of this second stove, including the bottoms of four plaster-lined cleanouts that still contained ash that fell from the dismantled burners above. The dresser was also rebuilt and the room received a new coat of plaster. The plaster preserved evidence of enough built-in shelving to accommodate dozens of state-of-the-art copper pots and pans that Jefferson purchased in Paris and that Hemings inventoried before Jefferson freed him in 1796.

These are just some of the recent discoveries in the South Pavilion cellar. Visitors can see and learn more about them all in a new on-site exhibit. 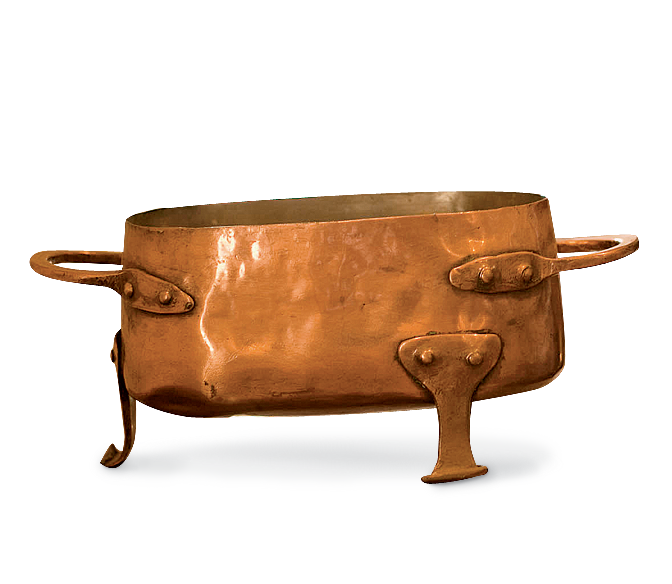 Why was Jefferson transﬁxed by French cuisine? Classical French cuisine evolved in the early 17th century as a new idiom for conspicuous consumption among French aristocrats. It replaced a Renaissance cooking tradition that emphasized layering multiple ﬂavors and the lavish use of exotic and costly spices like cinnamon, nutmeg and ginger. As spice prices declined in the early 17th century — the result of the same improvements in European naval and military technology that fueled colonial expansion — elite diners required effective ways to signal wealth. The new French cuisine aimed for “le vrai gout,” meaning “the true taste,” preparations that required great technical skill and highlighted the natural ﬂavors of the main ingredients, revealing their freshness and quali™. It emphasized fresh vegetables and fruits that were perishable and fragile, and sparked costly investments in new varieties, cultivation techniques and vegetable gardens. 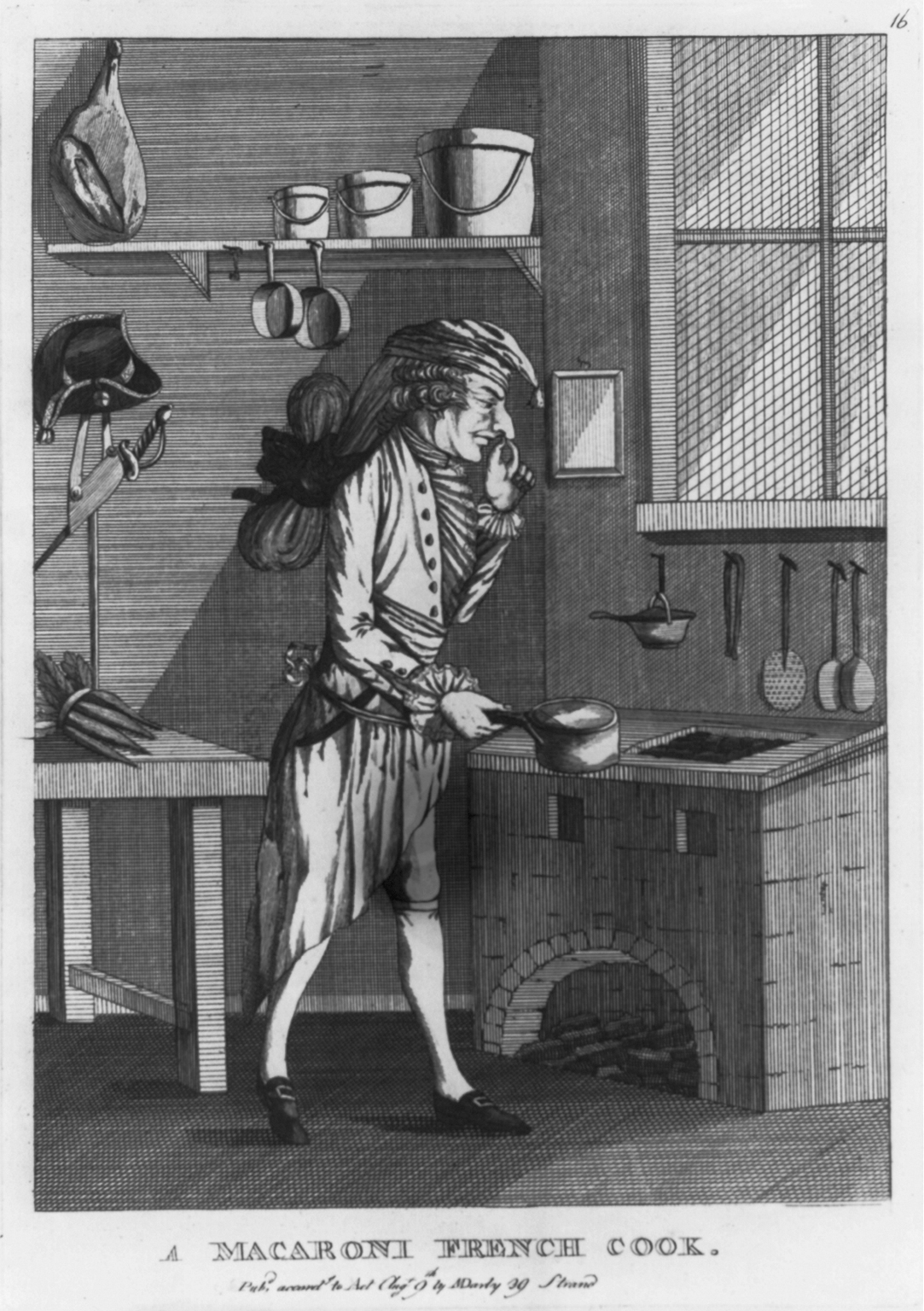 Stew stoves were French cuisine’s most visible expression, and their presence traces the spread of the new culinary tradition across the Atlantic world. Stew stoves began to appear in elite architectural pattern books and the houses of English aristocrats in the early 18th century. By the third quarter of the 18th century, they could be found in the houses of British colonial elites.

The only known surviving example in North America is in the mansion occupied by Benning Wentworth, the English governor of New Hampshire.

Researchers with Monticello’s Digital Archaeological Archive of Comparative Slavery project have located examples in the houses of two of the wealthiest men in Britain’s richest colony, Jamaica: Hibbert House, a lavish neoclassical townhouse in Kingston, built in the 1750s by Thomas Hibbert, Jamaica’s largest slave trader, and Colbeck Castle, built by sugar planter John MacLeod in the 1760s.

Jefferson’s plan to include stew stoves in Monticello’s ﬁrst kitchen in the late 1760s and their construction soon thereafter attest to his ambitions to participate in this ocean-spanning social milieu. His ongoing investments in French kitchen technology, French training for enslaved chefs, and building and maintaining a massive vegetable garden stocked with exotic varieties all make sense only when we see them as part of this larger historical process.