Jefferson’s Manual and the Modern Rules of the U.S. Congress

A discovery of Jefferson’s hand-written annotations in a copy of his Manual has led to new findings about Jefferson’s leadership on parliamentary law and a call for the modern Congress to update its rules. 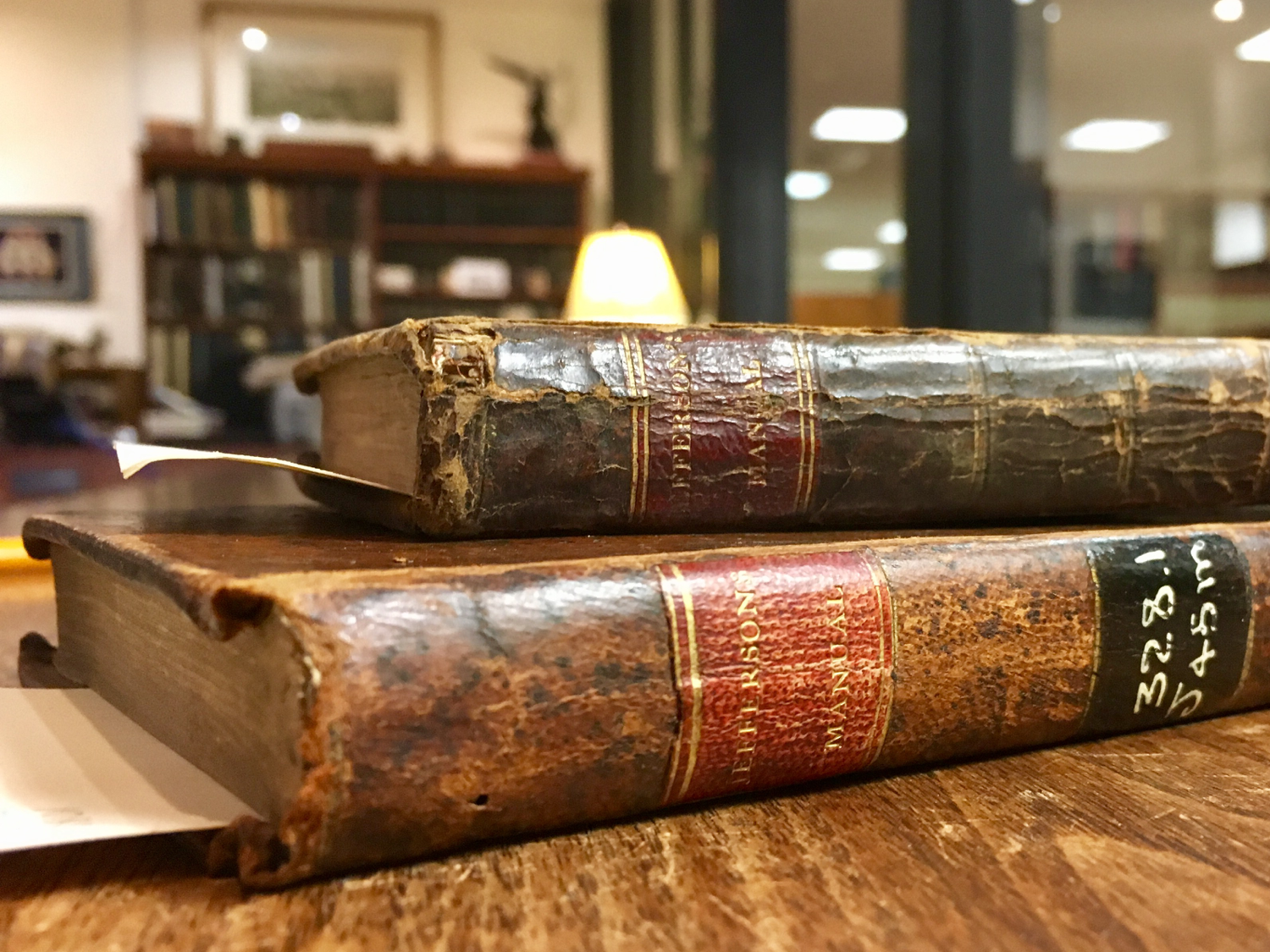 While serving as Vice President, Thomas Jefferson took years of notes he had gathered on parliamentary rules and developed them into the Manual of Parliamentary Practice.  The Manual, published at the close of his term as Vice President in February 1801, was deposited with the Senate by Jefferson as “the Standard by which I judge and am willing to be judged.”  The Manual was formally adopted by the House of Representatives in 1837 and has been regularly printed as part of the House and Senate Rules over the many decades since.[1] 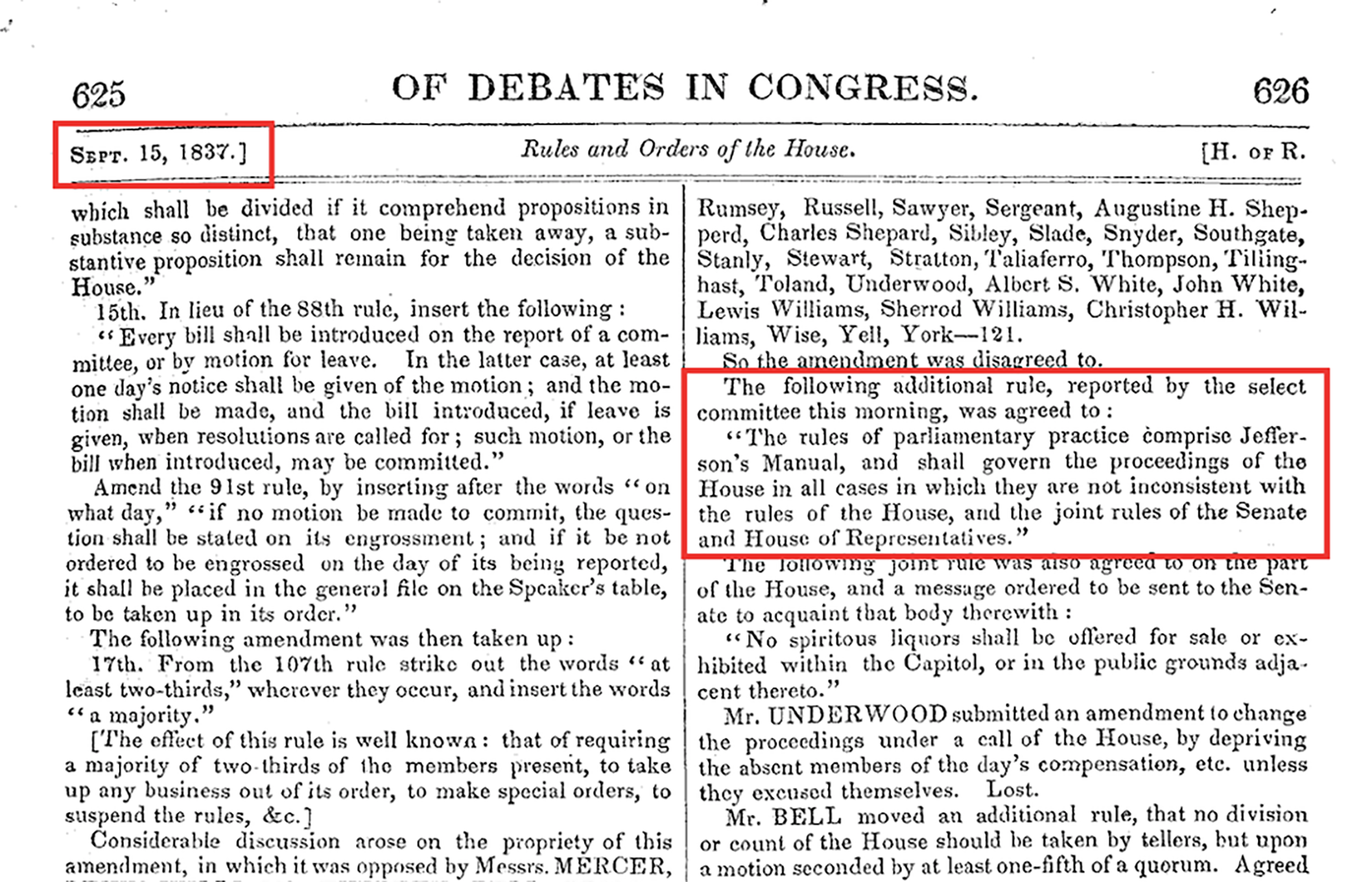 Publication of his Manual, just days before assuming the office of President of the United States, could be thought of as Jefferson’s last word on parliamentary law and the rules of the United States Congress. However, it is not. In the years following, President, Jefferson continued to read and make careful notes on the subject. The second edition of the Manual, published in 1812, contains new additions by Jefferson and was the result his continued interest and research on the subject. These additions do not radically alter congressional procedure but they do clarify and elaborate which precedents in British parliamentary law Jefferson was drawing from in writing the I. 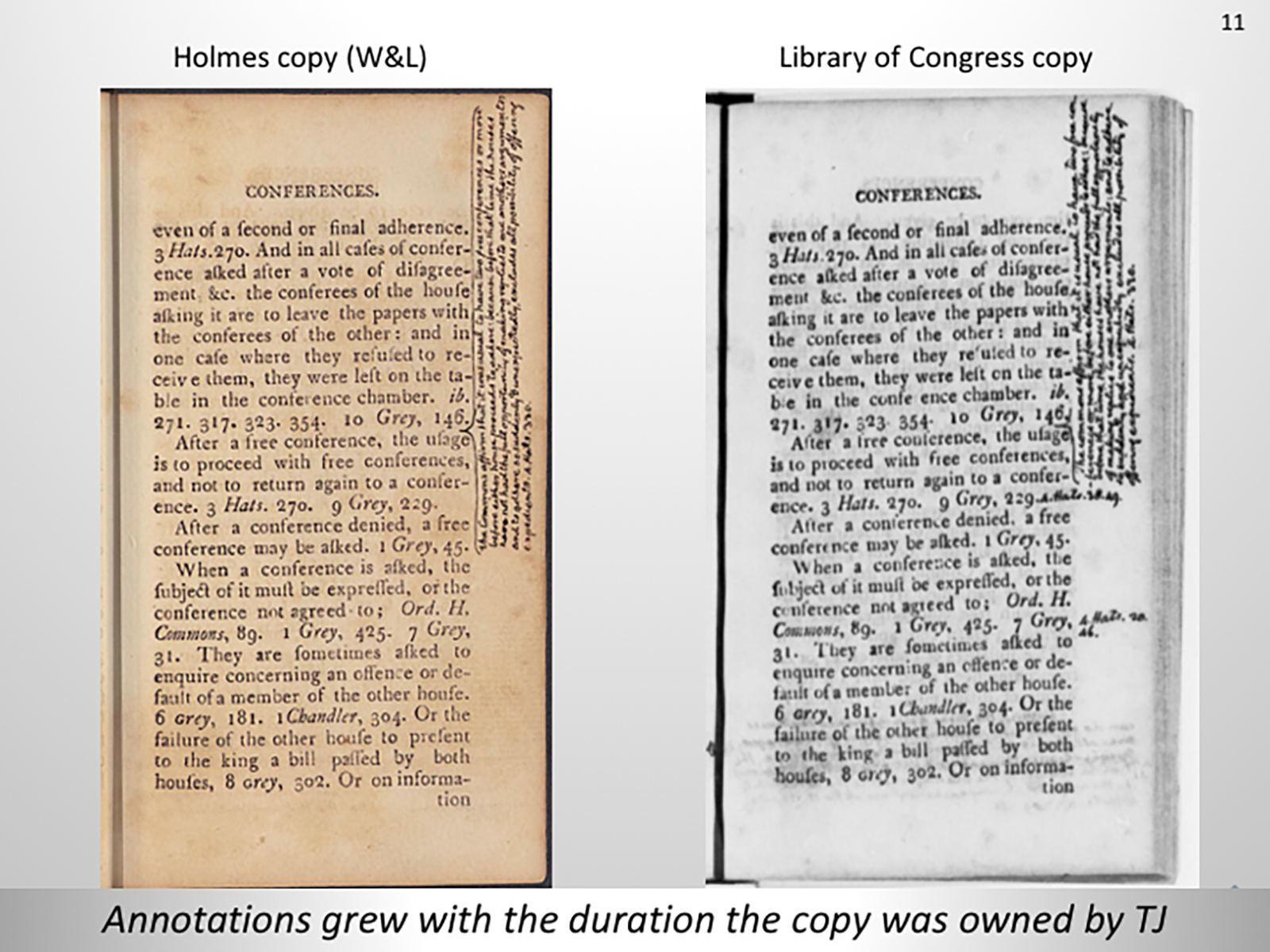 However, in all the years for which Jefferson’s Manual has served as a standard for the U.S. Congress, it has been the 1801, not the more refined 1812 edition, that has been used.  It is time for Congress to correct this historical inaccuracy by adopting the 1812 second edition of the Manual to reflect the true intentions of Thomas Jefferson, honor the role of precedent, custom, and rules in legislative proceedings, and enrich the institution of the U.S. Congress. 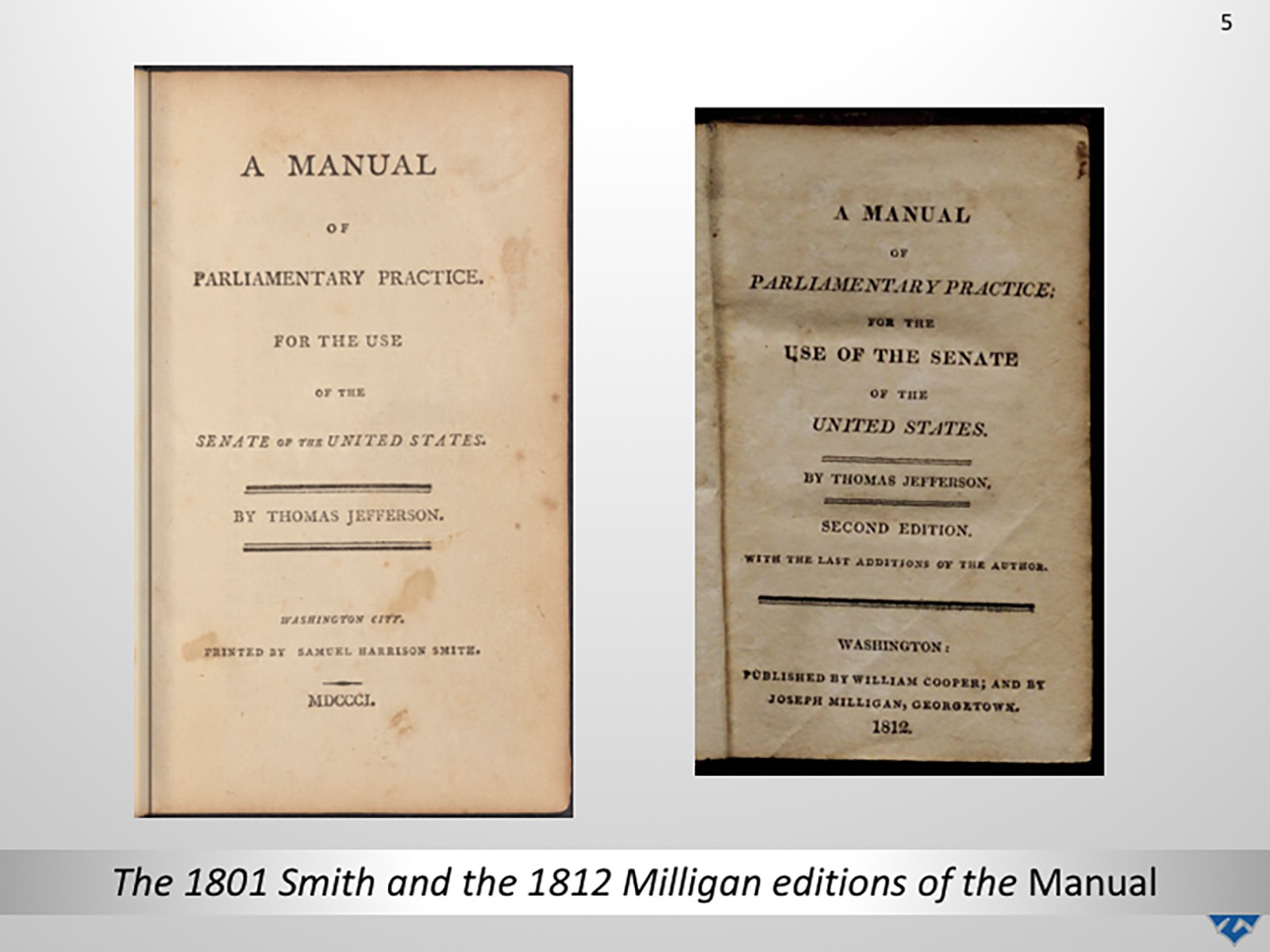 Evidence for Jefferson’s intentions comes in his correspondence and in careful annotations he made in three personal copies of the 1801 Manual, one of which is in the archives of Washington and Lee University (W&L) and has not been examined by scholars until now. This copy was presented to the Speaker of the Virginia House of Representatives Hugh Holmes in 1803.  Another of these annotated copies was given to leader of the Virginia Senate Francis Taliaferro Brooke in December 1802.  The third annotated copy remained in Jefferson’s possession until the end of his life. These books, annotated in Jefferson’s own hand, are not just interesting historical artifacts. Rather, they tell a story of Jefferson’s continued engagement on the subject of parliamentary law and the development of his research, which continued into the early years of his presidency. 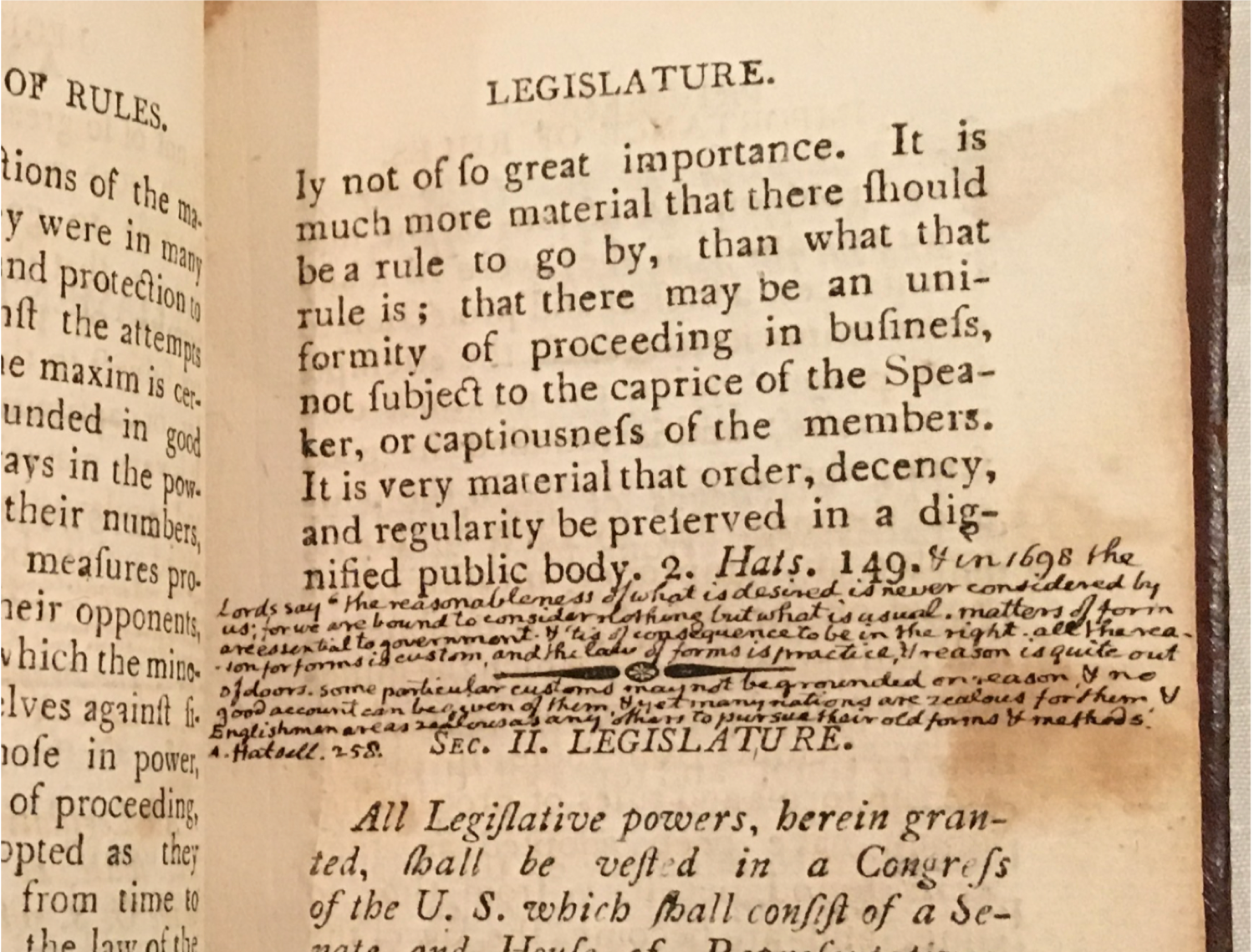 Such efforts formed the basis for the true second edition of the Manual published in 1812.  In January 1812, Jefferson responded to the inquiries of the Georgetown publisher Joseph Milligan, telling the printer that: “I am perfectly willing that you should print another edition of the Parliamentary Manual.”[2]  In this letter, Jefferson revealed something of his further reading on parliamentary law, adding “when I compiled it, I had never yet seen the 4th vol. of Hatsell. a subsequent perusal of that volume enabled me to make some useful additions which I had printed, & now inclose you a copy of them. these should be inserted in the text of the new edition in their proper places”. 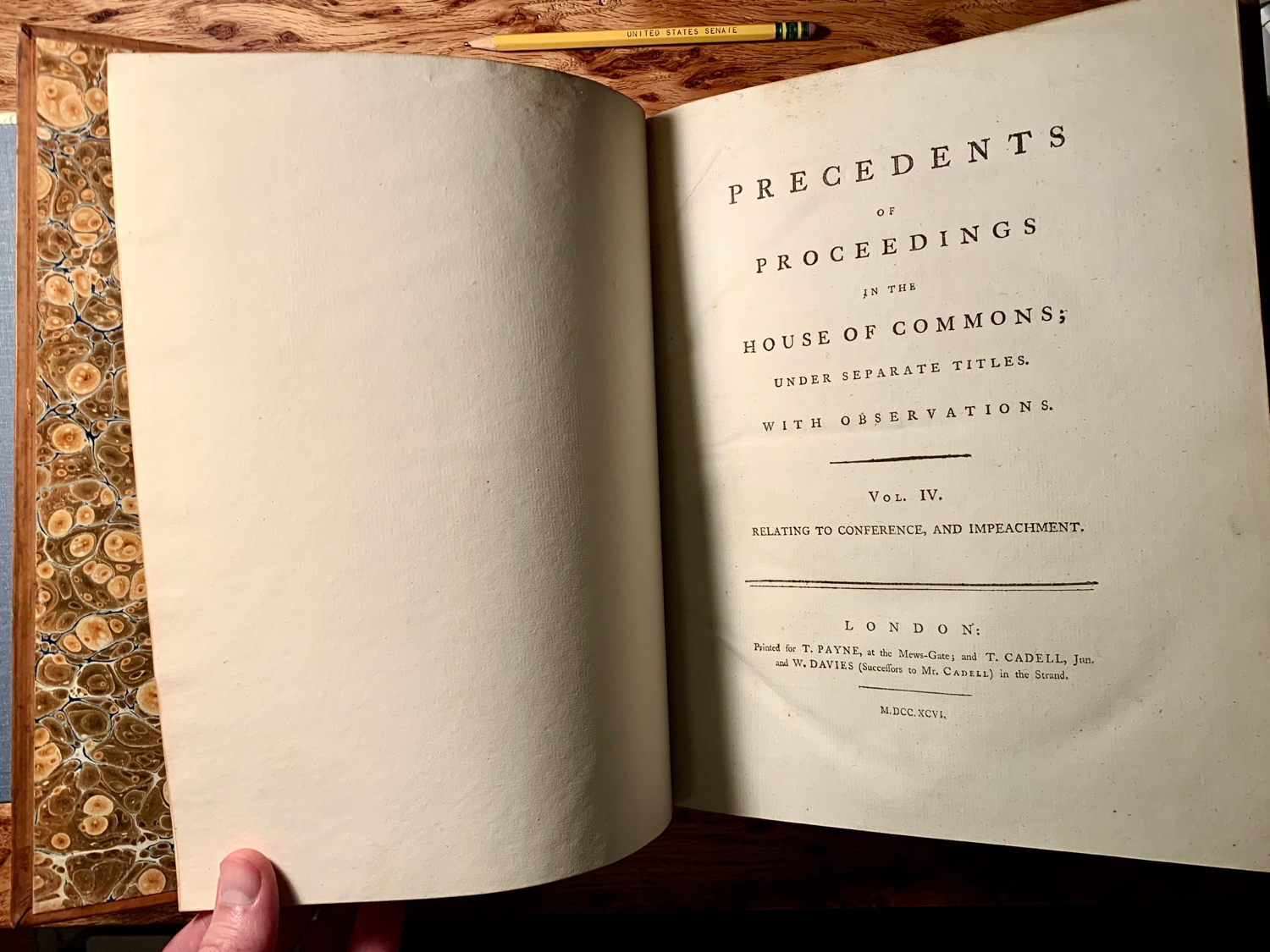 The esteemed late Senate Parliamentarian Floyd M. Riddick suggests that the 1812 edition should serve as the one used by the Congress, rather than the 1801 edition as historically practiced.[3]  Riddick stated, “There are a number of variations in contents and citations of Jefferson's Manual as printed in this volume compared to those printed in the Manual of the House of Representatives and the 1975 edition of the Senate Manual.  These should be checked out and verified by someone, and if this version is absolutely correct, the House of Representatives might do well to replace its current version as printed in its Manual from Congress to Congress by substituting this one.”[4]

I have responded to Riddick’s call to be just that someone. A line-by-line review of the 1801 Smith publication, the 1812 Milligan second edition, and the collection of Jefferson's hand-written annotations across three copies of the first edition provides convincing evidence that Milligan’s 1812 second edition should supplant Smith’s 1801 edition as reflecting Jefferson's true intention for posterity.

This project – to change the edition the modern Congress uses as precedent to the 1812 edition – could be achieved in the House with a simple amendment to update Jefferson's Manual printed with the Rules and Manual of the House of Representatives for the One Hundred Seventeenth Congress to reflect the Second Edition of 1812 with the last additions of Thomas Jefferson, and the Office of the Parliamentarian could then ensure the updated language is inserted at the appropriate places in the printed rules.

The argument for adopting the 1812 Manual is that for an institution which respects precedent so greatly as the U.S. Congress, it is important to be historically accurate by adopting language that speaks most clearly to that precedent.  To reflect Jefferson’s true intentions, the 1812 Manual should be the standard by which to judge.

Brian Alexander, Ph.D., is an assistant professor of politics at Washington and Lee University and a 2020 Fellow at Monticello's Robert H. Smith International Center for Jefferson Studies.