Just as the first cases on COVID-19 were being reported in Virginia, Monticello's archaeologists were completing excavations on the East Lawn, in front on Jefferson's mansion. Our immediate goal was to make way for the first-ever electric lighting system for the area. But there was a much bigger historical payoff: evidence from this fieldwork and from a shovel-test-pit survey we conducted in 2018, reveals how Jefferson, relying on the labor of enslaved workers, sculpted the topography of the East Lawn, beginning in the late 1790s, in a radical transformation of the mountaintop landscape. The transformation accompanied the construction of Monticello II, the house we see today, and left much of the landscape associated with Monticello I, the house Jefferson began building thirty years earlier, buried under many feet of fill. Remarkably, the evidence for this transformation comes almost entirely from archaeology -- there is no mention of it in the copious documentary record that Jefferson left behind.

Today the East Lawn -- in front of the main entrance to the house -- consists of two concentric zones: The inner zone, closer to the house, is a perfectly flat expanse centered on the east portico. Its perimeter follows what Jefferson described as "semi-oval", demarcated by a decorative post-and-chain fence (Figure 1). We know about the fence because Jefferson -- in Jeffersonian fashion -- recorded the weight of the chain on July 1, 1815 (link). The outer zone lies outside the fence, where the ground surface gently slopes to the east, away from the level. Together these two zones form a seamless whole. Today, as in the early-19th century, visitors to the house walk up the slope, pass through an opening in the fence, and cross the level to reach the east portico and enter the house. 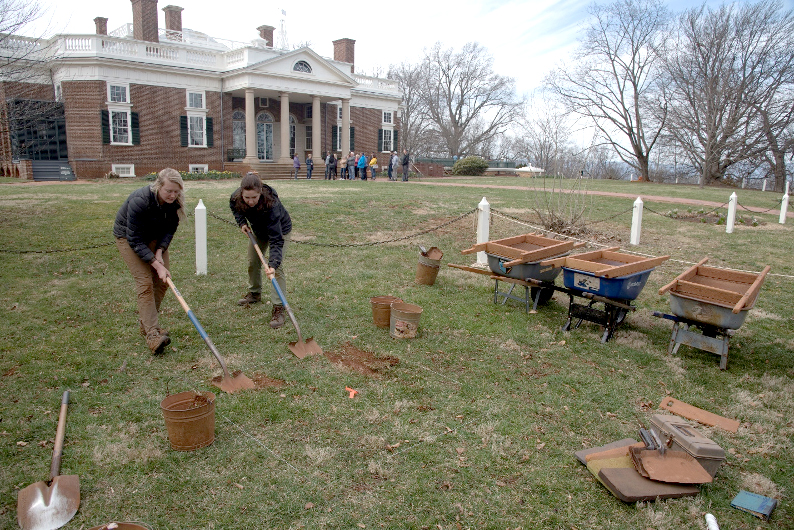 Figure 1. Archaeologists Cameron Wooddell and Elizabeth Donison begin excavating a 5-foot quadrat just outside the post-and-chain fence that surround what Jefferson called "the semi-oval level". Excavation revealed deposits of brick bats and sediment, over three feet deep, derived from the demolition of Monticello I and extensive leveling of the ground surface associated with the construction of Monticello II.

How did Jefferson and his enslaved laborers create this affecting approach? We have been able to piece together a tentative answer from our archaeological fieldwork. The first clues come from two 5-foot quadrats dug next to the mansion, inside Jefferson's semi-oval level (Figures 2 and 4). In both these excavation units, we found subsoil -- a distinctive clay-rich zone in the soil profile that has not been disturbed by human activity -- at only a half foot below the current ground surface. We then dug a third quadrat to about the same depth, just outside the post-and-chain fence (Figure 1). Instead of subsoil, we found overlapping lenses of human-deposited fill that contained large numbers of brick bats. 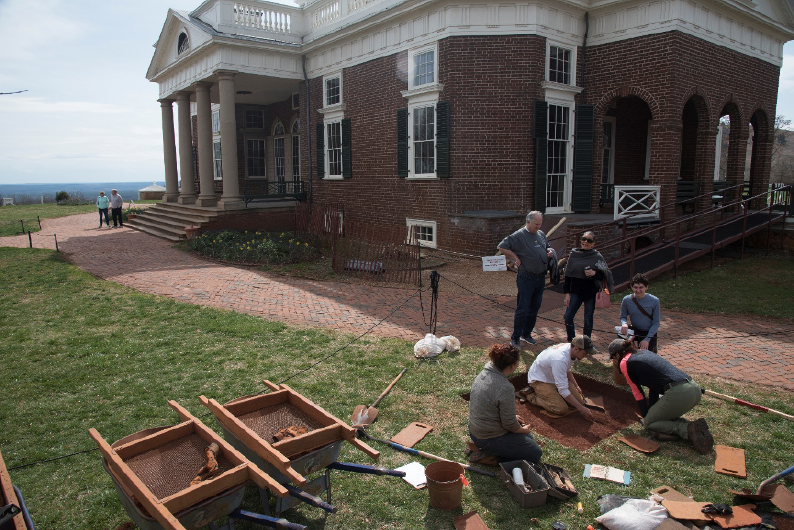 Figure 2. Before the arrival of COVID-19 in February, archaeologist Sarah Corkett explains to visitors excavations of the quadrat closest to the tea porch and dining room.

We turned up more clues when we went back to reconsider the evidence from shovel test pits (STPs) that were dug in the outer zone in 2018. The STPs fall on a 20-foot grid, in accord with the protocols we use for our ongoing research project: the Monticello Plantation Archaeological Survey. There were two big surprises. First, in most of our STPs, we could not reach subsoil! That was because it had been buried by more than three feet of fill. How much more is unknown because, three feet is the maximum depth to which it is physically possible to dig a STP. Second, many of the STPs produced massive amounts of brick rubble, over 40 kilograms in some cases.

The STP evidence implies that the fill we encountered in the quadrat just outside the post-and-chain fence is just the tip of the iceberg. We can get some idea of just how big the iceberg is by mapping the amount of brick that came out of each STP. The map (Figure 4)  suggests that nearly all the gently sloping zone east of the post-and-chain fence is underlain by fill, laden with brick bats, and we suspect this fill underlies much of the semi-oval level inside the fence as well. 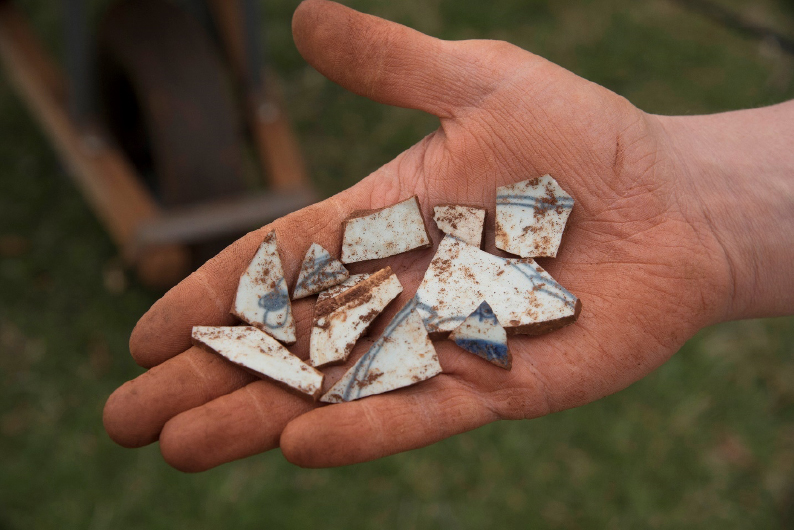 Figure 3. Sherds from a Chinese porcelain plate, found in the quadrat closest to the dining room and tea porch and almost certainly used by Jefferson family members. The decorative pattern dates to c.1800. Its appearance on sherds from the lowest layer in the quadrat supports the idea that earlier artifacts and the surface on which they were deposited were removed in the leveling campaign of the 1790s.

Where did the bricks and fill come from? The only possible source for this much brick is the first version of Jefferson's house, Monticello I. The bricks are destruction debris from the demolition of much of the original house, in advance of the construction of Monticello II in the 1790's. In a letter to his son in law, Thomas Mann Randolph, Jefferson described the process: "We are in dreadful confusion with the demolition of our walls, which is more tedious than I expected. The walls are so solid that 7. men get down but between 3. and 4000. bricks a day. They would make new ones as fast. The tumbling of brickbats keeps us in constant danger. We have as yet had but one accident of a man knocked down" (link).

What about the redeposited soil we discovered in the quadrat just outside the post-and-chains fence? The important clue here is that the sediment was deposited in overlapping layers with distinct colors and textures. Some layers have more topsoil, some more subsoil, and some are rich in decomposed greenstone, which only occurs deep in the natural soil horizon at Monticello. Each layer represents a cartload of sediment excavated, transported, and dumped by enslaved laborers to create the semi-oval level and the sloping ground around it. The decomposed greenstone came from digging the cellars, covered passages, and wings under Monticello II. The rest of the fill is from cutting into the natural topsoil and upper subsoil below it to flatten the mountaintop around the mansion. While the topography on the East Lawn looks naturally seamless, it is an artificial composite. We conclude that the East Lawn and the rest of the mountaintop landscape, as we know it today, dates to the construction of Monticello II in the 1790's.

Can we find evidence to back up this account in documents? We know from an entry in Jefferson's Memorandum Book from 1768, that he "agreed with Mr. Moore that he shall level 250 f. square on the top of the mountain" (link). But there is no mention of the massive earth-moving effort three decades later that produced the deposits of soil and brick bats that we encountered. This may be because Jefferson was living at Monticello in the second half of the 1790's and could direct the work in person, rather than relying on letters to on-site managers. 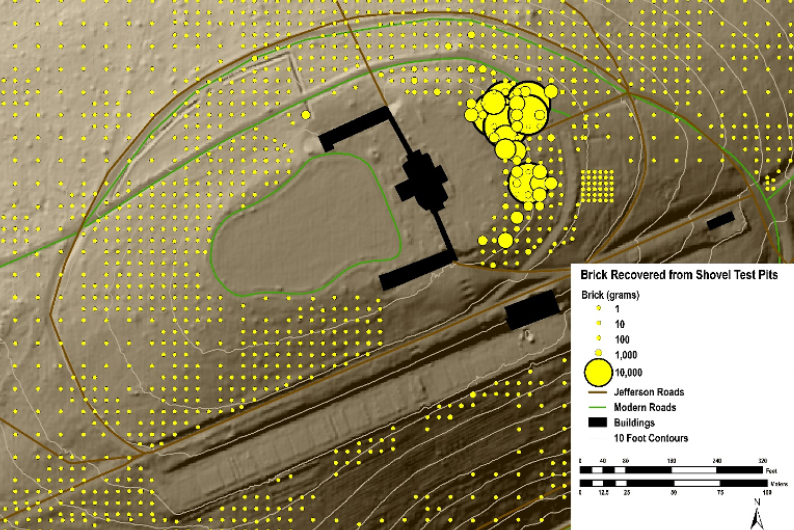 However, there are hints of Jefferson's more general interest in earth moving in a series of letters he wrote between 1801 and 1806 to his son-in-law John Wayles Eppes, who was considering building a house at Pantops, just across the Rivanna from Monticello. In 1801 Jefferson wrote "I thought it indispensable that the ground should be first levelled as that of Monticello is, and that if you would be at the trouble of hiring hands, & having the work done, I would pay their hire". The letter includes a captioned sketch describing exactly the combination of cutting and filling that we found archaeologically on the East Lawn (link).

Wayles never did move to Pantops. But Jefferson's earth-moving enthusiasm soon found expression again at Monticello when he hired a gang of enslaved laborers to enlarge his terraced vegetable garden to its final length. The project took two years of work, finally completed in 1809. The sunken lawn that Jefferson constructed at Poplar Forest is another manifestation.

In the larger context of elite Atlantic culture, Jefferson's preoccupation with moving massive amounts of sediment to create spaces like the East Lawn and the terraced vegetable garden, raises two questions. The first starts with the obvious fact that the labor for their construction was costly. Jefferson himself recognized the costs. He confessed to Eppes in 1806 that he could do no more than pay for leveling at Pantops because he was forced "to suspend every expence which is not indispensable: otherwise I shall leave that place [Washington, DC] with burthens contracted there, which if they should fall on my private fortune, will doom me to a comfortless old age" (link). But despite his financial worries, that same week Jefferson was busy planning the costly expansion of the Monticello vegetable garden terrace, using rented slave labor (link). He must have sensed there was a benefit. What was it?

Second, Jefferson's earth-moving projects featured plans and sections with simple geometric shapes that had gone out of fashion in England in the mid-18th century, eclipsed by the sinuous and flowing, but no less artificial, landscapes associated with William Kent and Capability Brown. Jefferson had read about, visited, and admired these kinds of landscape parks in England with John Adams. Why did he stick with the old-fashioned designs?

We do not have empirically defensible answers to either of these questions. A first step in getting them will be acquiring comparative evidence. We need systematic quantitative estimates of the timing and level of investment in leveling and terracing among elites across the Chesapeake during the 18th and early-19th centuries, along with data on level of wealth and social connections and political engagement. These data would allow us to use statistical methods to assess how unusual Jefferson's landscaping tastes and investments were, and to tease out some of the causal factors responsible for variation. That is a collaborative field research project to look forward to when we all emerge from the current COVID crisis.