Drawing of a cod

The codfish, which abounds in the cold waters of the North Atlantic, in particular off the Banks of Newfoundland, had long before the settlement of Massachusetts been sought by Norman, Basque, and Portuguese fishermen. They fished off the Grand Banks, dried their catch on some accessible island, and carried it home to provide Friday and Lenten fare. When Massachusetts was settled, the cod became the foundation of its colonial economy, to such an extent that in 1784 a wooden codfish was hung in the Massachusetts House of Representatives. Samuel Eliot Morison observed in The Maritime History of Massachusetts: "Puritan Massachusetts derived her ideals from a sacred book; her wealth and power from the sacred cod."[1]

In November 1825, Thomas Jefferson wrote Ellen Coolidge, giving her news from Charlottesville, and asking her to act as his "agent at Boston, for certain articles not to be had here." He continued, "we should be very glad occasionally to get small supplies of the fine dumb cod-fish to be had in Boston, and also the tongues and sounds of the Cod. this selection of articles I trouble you for is not of such as are better there than here; for on that ground we might ask for every thing from thence, but such only as are not to be had here at all. ... I will ask of you then a supply of a kental of good dumb fish, and about 20. or 30. ‚Ñî of tongues and sounds .... we should be the better perhaps of your recipe for dressing both articles."[2] 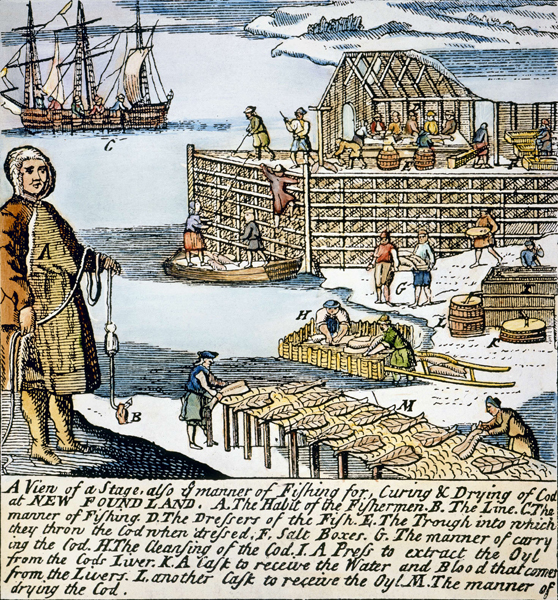 Image depicting the process of curing, drying, and salting codfish caught off the coast of Newfoundland, Canada

The dumb- or dunfish that Jefferson requested was the best grade of cod that Massachusetts exported to Catholic Europe. Admiral Morison thus described the curing process: "Fish for 'dunning' at this period was caught in deep water, preferably off the Isles of Shoals in early spring. It was split and slack salted, piled up for two or three months, covered with salt hay or eel grass in a dark store, uncovered once and restacked under pressure, and by late summer, if nothing went wrong, had acquired the proper ripeness and dull color."[3] It is today a lost delicacy. Celia Thaxter, writing in 1873 in Among the Isles of Shoals, observed: "The process of dunning, which made the Shoals fish so famous a century ago, is almost a lost art, though the chief fisherman at Star still duns a few yearly."[4] Swampscott, according to Admiral Morison, "dried her codfish exceptionally well, and remained the last place where the delectable dunfish was properly cured."[5] Today we can get only the dried salt cod that was the middling grade of Massachusetts; not exported as a delicacy but kept at home as the staple winter food of New Englanders. Very good that can be, but what Ellen Coolidge sent her grandfather in 1825 was the best grade of dunfish, very probably from the Isles of Shoals.

In March 1826, Ellen wrote to Monticello to send Jefferson "such receipts for dressing the fish & tongues & sounds as I could obtain," but adding in a hoity-toity vein, "these dishes, especially the latter, are scarcely ever brought upon table in Boston, owing, I suppose, to their being so easily obtained as to lose their value by their commonness. the salt cod is prepared the first day very much as we do our bacon Hams, soaked the over night & boiled a good deal to soften & freshen it; it is then eaten with hard boiled eggs, melted butter, or oil, & various boiled vegetables as beets, carrots &c. egg or anchovy sauce may be served with it & is prefered by some. the second day the fragments of the cold fish are minced very fine & mixed with boiled potatoes, & either eaten with a sauce or made into cakes & browned in a frying pan. with the tongues & sounds the principal care is to freshen them as much as possible by washing & soaking & they are oftenest boiled plain & served with a sauce."[6]

Jefferson reported on March 19, 1826, that "our brandy, fish, tongues, and sounds are here, & highly approved," and repeats his pleasure in "the luxury of the fish, and especially the tongues and sounds, which we consider as a great delicacy."[7] His granddaughter was, I fear, not much of a cook in recommending that the fish be "boiled a good deal to soften & freshen it." Andre L. Simon in A Concise Encyclopedia of Gastronomy firmly stated that salt cod "must be soaked for twelve hours, heated very slowly, simmered but never boiled, for about an hour, and skimmed carefully from time to time."[8]